Marines test their island-fighting skills during exercises in Okinawa 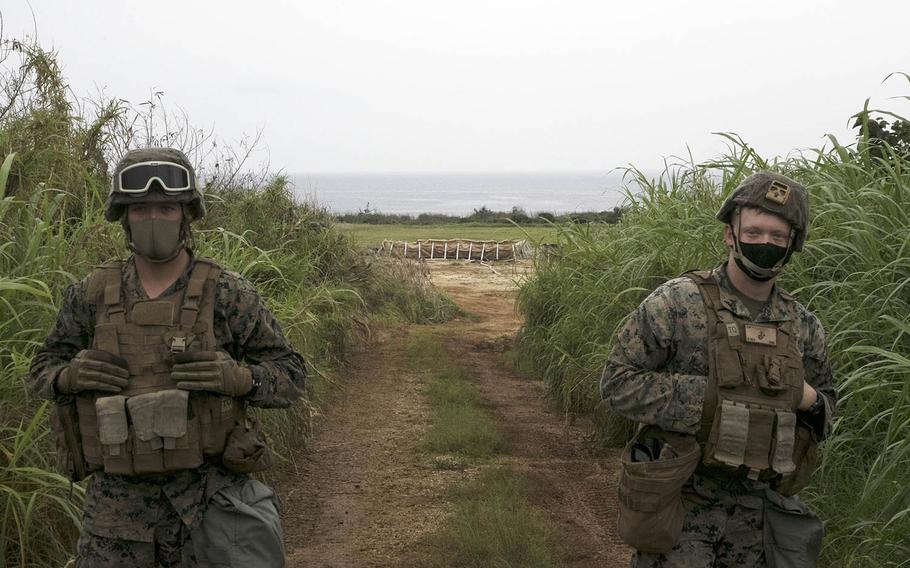 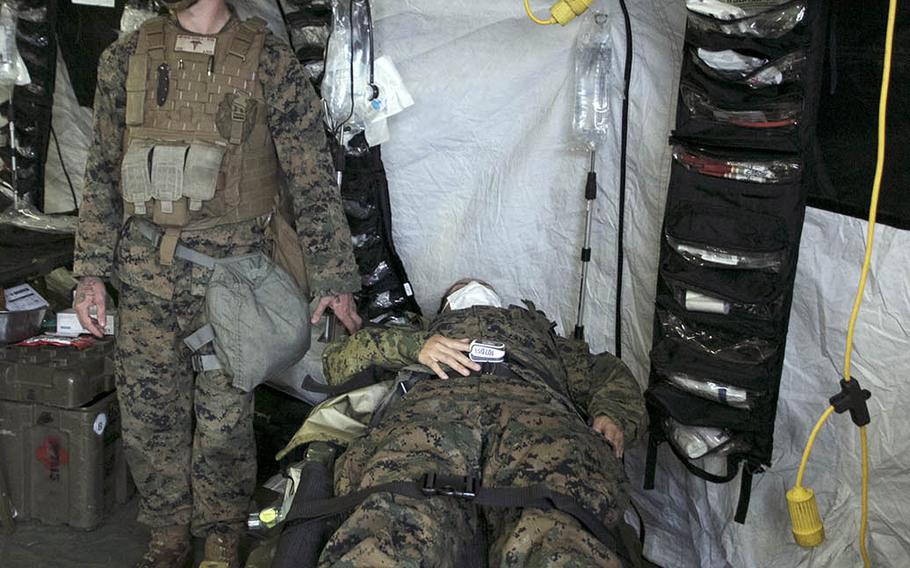 A Marine from the 9th Engineer Support Battalion checks to make sure fuel is running to a 500-pound bladder during a combat readiness exercise for the 1st Marine Aircraft Wing at Kin Blue Beach, Okinawa, April 20, 2021. (Matthew M. Burke/Stars and Stripes) 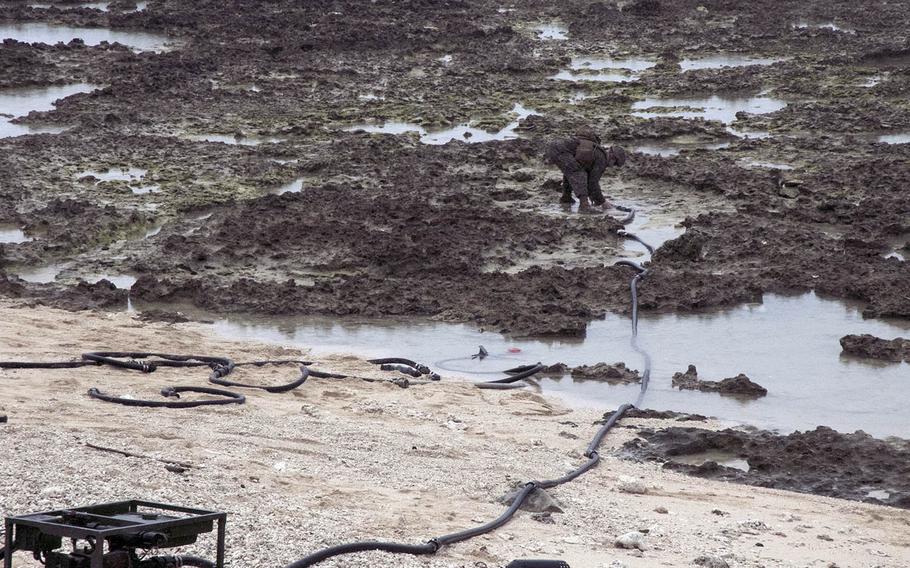 A member of Marine Wing Support Squadron 172 sucks up seawater that will be purified during an exercise on Ie Shima, Okinawa, April 16, 2021. (Matthew M. Burke/Stars and Stripes) IE SHIMA, Okinawa – The Marine Corps on Okinawa put the commandant’s island-fighting doctrine into practice in another series of military exercises this month by sending Marines, fighter jets and helicopters to rough landing sites in an austere location.

“It’s about recalibrating the mindset of the typical Marine to be able to deploy to various islands, to deploy in a distributed manner and be able to survive as a standing force in the Pacific,” Lt. Col. James Pryor, commander of Marine Wing Support Squadron 172, told Stars and Stripes on April 16 on Ie Shima.

“It forces us to embark our gear and equipment and deploy people out here,” he said. “It’s a little bit more challenging and that’s what we’re looking for, to replicate what it would be like to move to other islands.”

Marine Corps Commandant Gen. David Berger made expeditionary advanced base operations a Corps doctrine in planning guidance he issued in July 2019. It complements the 2020 National Defense Strategy that identifies big power competition with Russia and China as the U.S. military’s highest priorities. The Castaway exercise in March and Noble Fury in October also experimented with the concept.

Expeditionary advanced base operations mean Marines must move inside the range of an adversary’s “long-range precision fires” and establish difficult-to-target forward bases, according to Berger’s guidance.

That translates to seizing and holding territory, supporting naval units at sea, refueling, rearming and relaunching aircraft and denying sea lanes to the adversary. From April 12-26, units of the Okinawa-base 1st Marine Aircraft Wing are demonstrating their ability to do some of that, Pryor said.

Reconnaissance Marines dropped onto Ie Shima and AH-1Z Vipers and UH-1Y Venom attack helicopters landed on cleared dirt patches near the beach for refueling and rearming.

A camouflaged net concealed a direct air support center, experimenting for the first time with a 12-man team, smaller than a full complement of around 20.

“We control aircraft and flights as well as make sure those aircraft and missiles do not impact each other in flight,” said Capt. Tyler Madden, support center commander.

The Marines covered other tasks that fit the advanced base concept, such as short, arrested landings by F-18 Hornet jet fighters and hauling a 500-pound fuel bladder with a CH-53E Super Stallion heavy-lift helicopter to serve as a refueling station.

“This is something that has to be practiced continuously because if you lose the feel for it, then you might make a mistake,” said Lance Cpl. Bryan Becerracamarena of the fuel-bladder team. “This is a really important job.”

The concept is sound, as far as modernizing the Marine Corps, but it won’t be enough to defeat a peer adversary like China in the event a conflict erupts, said Tetsuo Kotani, a senior research fellow at The Japan Institute of International Affairs, told Stars and Stripes by phone Wednesday.

“The basic objective of [expeditionary advanced base operations] is the diversification of forces to avoid Chinese precision strikes,” he said. “On that point, I don’t see a big problem.”

The weak links are the Navy’s amphibious assault ships, the warships that carry Marines and their air support elements to the fight and keep them reinforced and supplied.

They are key to projecting power but the U.S. and Japan badly need smaller, faster, stealthier transport ships, Kotani said. These ships would ferry equipment and reinforcements around an operations area marked by countless disputed islets, but Kotani said he doesn’t see a willingness by either country to provide them.