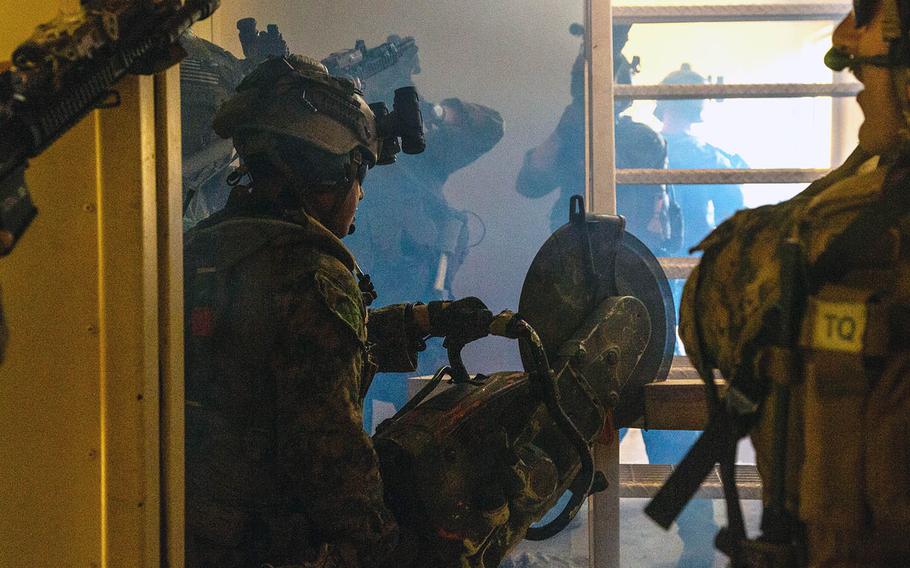 But Tuesday night after visitors had left for the day, the deserted 25-acre park was the scene of a mock raid by Marines and sailors with the Okinawa-based 31st Marine Expeditionary Unit, joined by local FBI agents and officers with the Honolulu Police Department.

Marine and FBI snipers atop the towering Tornado ride fired live rounds into an enemy silhouette target placed in the center of the park – four-out-of-four shots to the head.

As the only permanently forward-deployed MEU, the 31st is the go-to first responder for crises situations in the Indo-Pacific region, routinely working closely with agencies in other countries during disaster relief and humanitarian assistance.

This was the first time the 31st MEU had undergone realistic urban training in Hawaii. It has normally been conducted in Guam, but after the Mariana Islands were hit by Typhoon Mangkhut in September and Typhoon Yutu in October, planners looked to Hawaii.

“This was a great opportunity here,” Capt. Jordan Vargas, a platoon commander in Tuesday night’s raid, said as the raiders were preparing to take their “prisoners” to the nearby FBI headquarters for interrogation.

“As a reconnaissance platoon commander, it’s nice to get out of Okinawa once in a while to see a different look, and coming to Hawaii is a different look altogether,” he said. “There are a lot more bases, more scenario spaces.

“Hawaii provides pretty good realistic training that we just wouldn’t be able to do in Okinawa due to the possible sensitivities,” he said, alluding to ongoing complaints by some local residents about U.S. military activities there.

Asked if he had seen any downsides to urban training in Hawaii, Vargas laughed.

“Not really; not that I’ve seen so far. I haven’t heard one Marine say he’s upset to be stationed in Hawaii.”

The training challenges the Marines by tossing them into unfamiliar yet realistic urban terrain for scenarios in which they must also communicate and collaborate with local law enforcement agents.

A series of night raids on sites on Oahu led up to the culminating event at the water park. On Monday, a reconnaissance team had scouted the water park during business hours to survey sites where the high-value target would likely hold a meeting.

On Tuesday, the Maritime Raid Force, outfitted with night-vision goggles, climbed up the hill in the rear of the park, quietly ascended on the target building and set off a blast as they breached the door.

Realistic urban training will return to Hawaii early next year, with plans for an alternating the training between here and Guam.