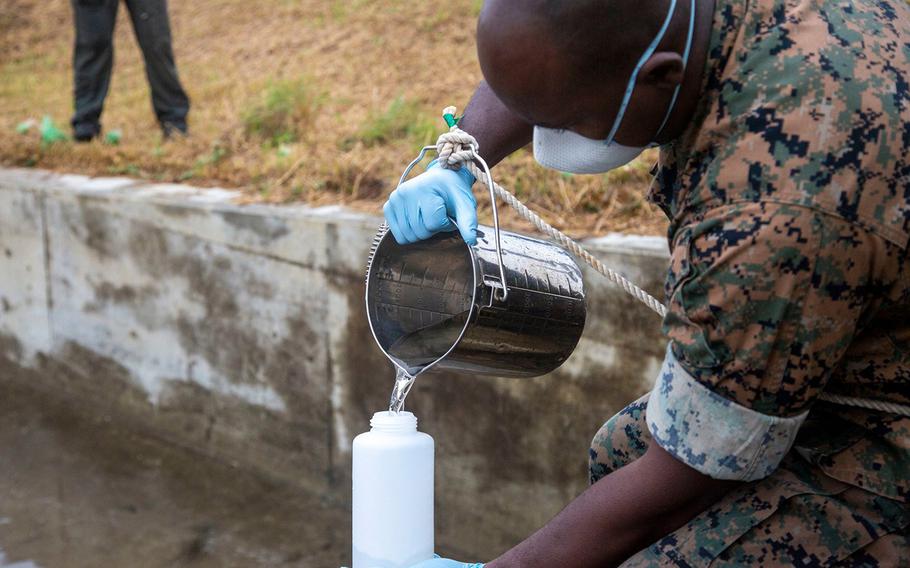 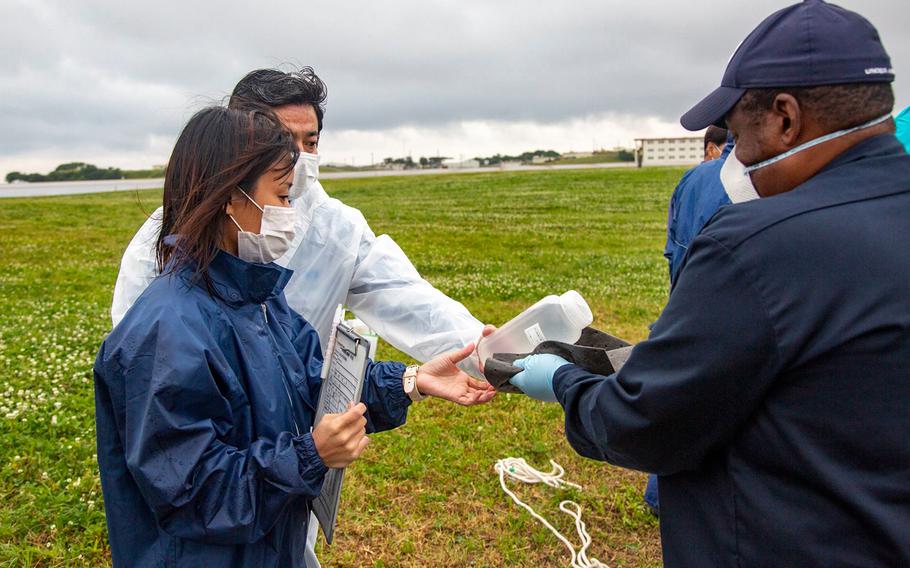 Ten representatives from the Japanese, Okinawa prefectural and Ginowan city governments, including Ginowan Mayor Masanori Matsukawa, were taken Tuesday to a hangar south of the runway where the spill occurred April 10.

The group collected one gallon of water at three separate drains near the spill site, the first time Japanese government officials have taken water samples from the air station, a defense bureau spokesman said.

The group included representatives from the prefectural environmental department; the Okinawa Defense Bureau, which represents Japan’s Defense Ministry; the Ministry of Foreign Affairs bureau on the island; and the Ministry of the Environment, a defense bureau spokesman said Thursday.

The samples were divided between the prefectural and central governments for testing, the spokesman said. Some government officials in Japan speak on condition of anonymity as a requirement of their positions.

“The visit was set up to help evaluate the effectiveness of the cleanup following the recent [firefighting foam] spill by collecting water samples from where the spill happened,” according to a Marine Corps Installations Pacific statement Wednesday afternoon.

“The visit was done in accordance with bilateral agreements between the United States and Japan, and highlighted the transparency and cooperation between our governments in environmental matters,” the statement said. “We appreciate the [government of Japan’s] bilateral approach to this issue, and we were happy to discuss our environmental stewardship.”

“It was good this sampling happened, but it would have been better if we could have done it when the incident happened,” a prefectural spokesman told Stars and Stripes on Thursday. “In the future, if we can send out the team as soon as the incident happens, we can find out how much [foam] went into the river and such. It has been so many days and it’s been raining since the incident happened, so I believe the sample result won’t contain high amounts of PFOS/PFOA.”

PFOS, or perfluorooctanesulfonic acid, and PFOA, perfluorooctanoic acid, are found in firefighting foam and are known to cause tumors, increases in body and organ weight and death in animals. The synthetic, fully fluorinated organic acids are also found in aircraft grease, water-repellant materials, cleaning agents and other products.

Both the defense bureau and prefectural spokesmen declined to say when their testing would be completed. The defense bureau is negotiating with U.S. officials to return to the base and collect soil samples.

The April 10 spill occurred after something triggered a fire-suppression system inside a hangar at the air station, officials said earlier this month.

Of the approximately 60,000 gallons spilled, 22,000 gallons were contained on the base. The remainder of the foam traveled off base through a storm drain and into a nearby stream and neighborhood.

Japanese officials expressed anger at what they called a “mass-leakage incident.”

Defense Minister Taro Kono said they may ask the United States to pay for damages.

Okinawa Vice-Governor Kiichiro Jahana toured the scene of the spill at Futenma on April 17. He received a briefing and an apology by Marine Corps Installations Pacific commander Brig. Gen. William Bowers.

Marine officials said Thursday they can’t release more details about the spill or what caused it because it remains under investigation. Marine Corps Installations Pacific spokesman Maj. Andrew Aranda Thursday called it “an accident.”