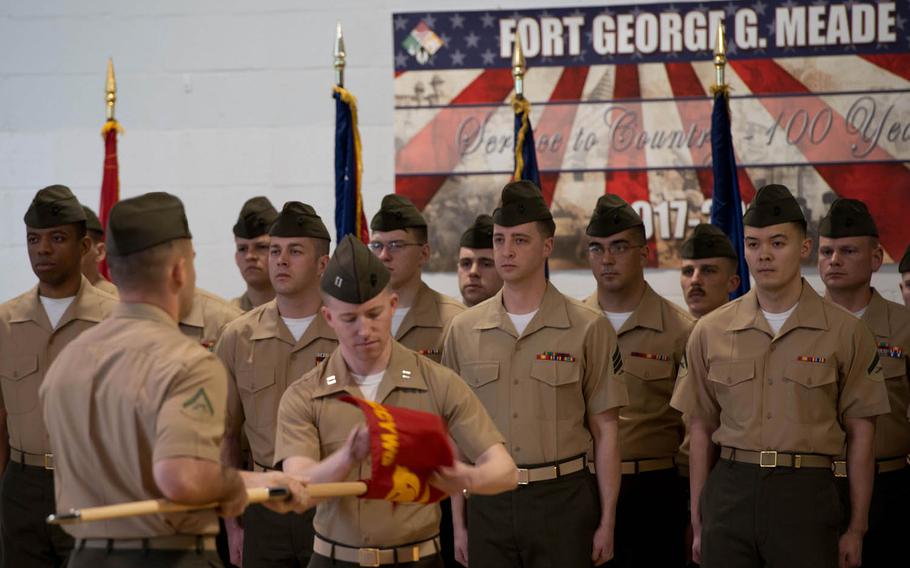 Marines with Marine Corps Cyberspace Warfare Group prepare to post the guidon during an activation of command ceremony at Fort George G. Meade, Md., March 25, 2016. Its mission is to man, train and equip Marine cyberspace mission teams to perform both defensive and offensive operations in support of U.S. Cyber Command and Marine Forces Cyberspace Command. (Courtesy of the U.S. Marine Corps)

The Marine Corps is standing up a new unit of cyberwarriors as the global battlefield evolves to include more and more computer networks.

The Marine Corps Cyberspace Warfare Group was activated Friday in a ceremony at Fort George G. Meade, Md., a Marine Corps statement said. Its mission is to man, train and equip Marine cyberspace mission teams to perform both defensive and offensive operations in support of U.S. Cyber Command and Marine Forces Cyberspace Command.

The unit has “a few” cyber teams up and running, the statement said; however, it won’t be fully operational until sometime next year.

“We’ve always had the means to communicate and the means to protect that communication, but today we’re in an environment where those methods are more and more reliant on a system of transmissions, routers and networks,” the unit’s commander, Col. Ossen D’Haiti, said in the statement. “So, the ability to protect that, the ability to control that and deny an adversary to interdict that, is crucial to command and control.”

Everything from power grids, banking, government operations to defense contractor weapons’ plans have shifted online in the past few decades. That information is a tempting target for both state-sponsored hackers and criminal organizations that are becoming increasingly sophisticated at cybertheft.

“While we’ve been fighting, our adversaries, many of them in this part of the world — pick one: China, North Korea, Iran, Russia — what have they been doing? Making money, buying new gear, stealing all of our secrets,” he said. “Ever look at all the Chinese equipment? What’s it look like? It looks like our stuff. How is that? They stole our stuff, fair and square.”

The Navy, Army, Air Force and Coast Guard are also actively recruiting cyber soldiers and standing up their own cyber units and programs.