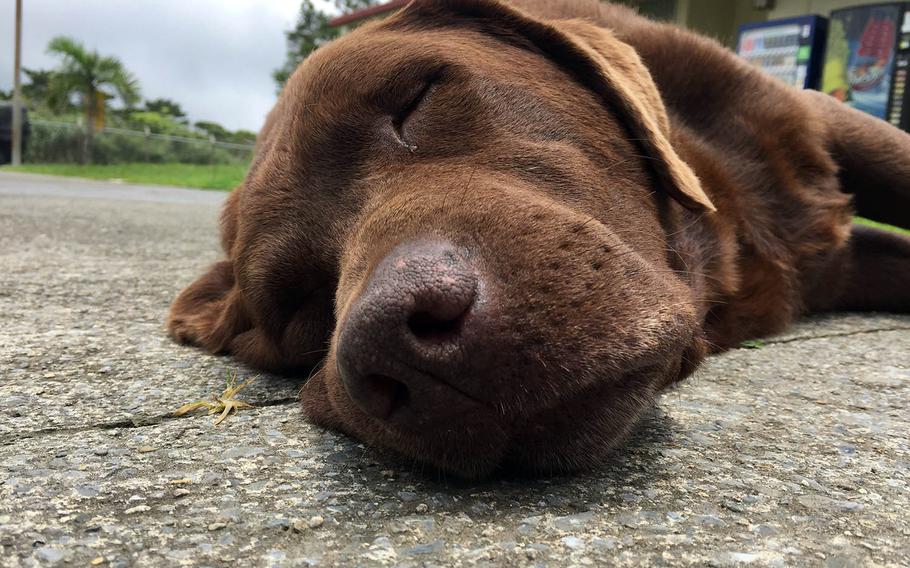 Lance Cpl. Bear takes a nap at Camp Gonsalves, Okinawa, in the summer of 2017. The mascot for the Marine Corps' Jungle Warfare Training Center died from liver cancer on Sept. 3, 2020. (Matthew M. Burke/Stars and Stripes)

Lance Cpl. Bear takes a nap at Camp Gonsalves, Okinawa, in the summer of 2017. The mascot for the Marine Corps' Jungle Warfare Training Center died from liver cancer on Sept. 3, 2020. (Matthew M. Burke/Stars and Stripes) 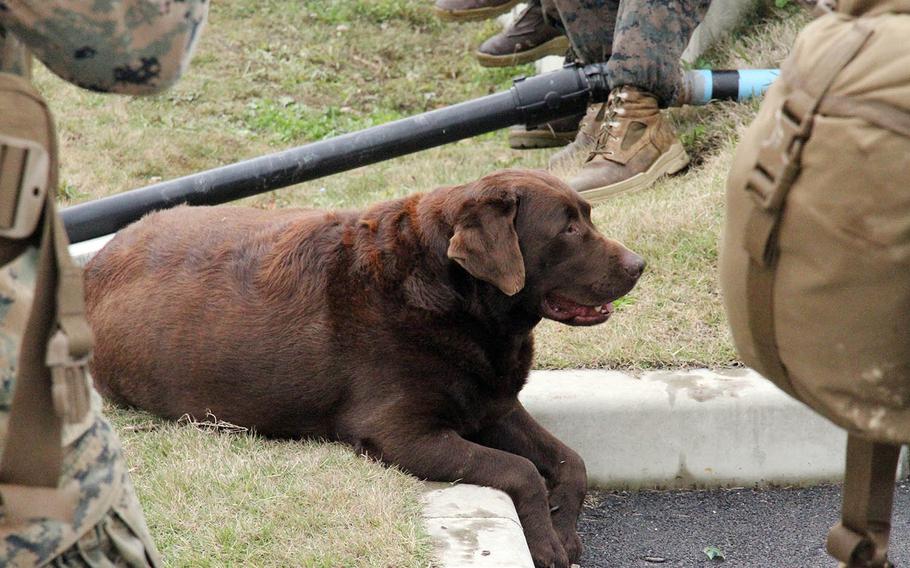 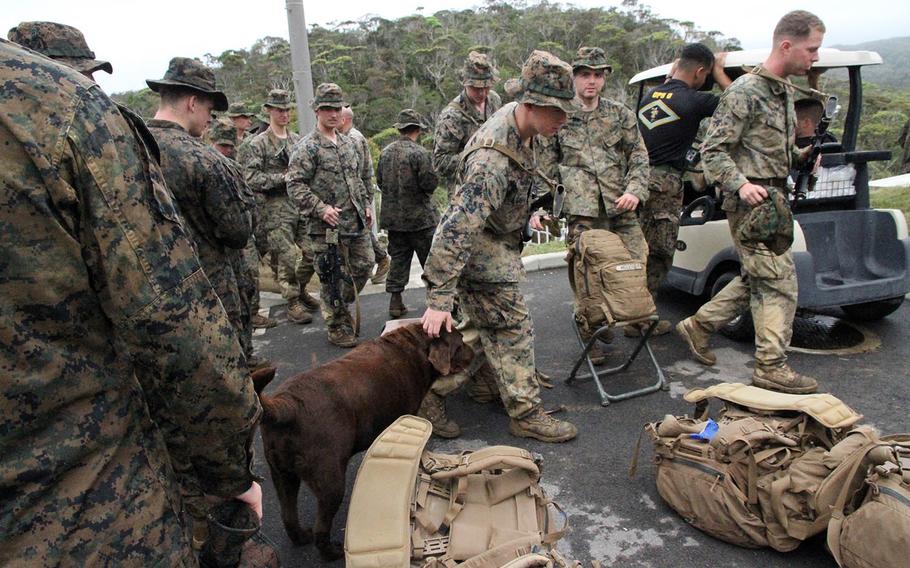 A Marine pets Lance Cpl. Bear before heading out into the jungle at the Jungle Warfare Training Center at Camp Gonsalves, Okinawa, in March 2015. (Matthew M. Burke/Stars and Stripes)

He was lazy and overweight. He smelled terrible. He ate colorful, neurotoxic newts and survived repeated bites by poisonous snakes. But at the end of the day, he was every Marine’s best friend.

The chocolate Lab was the mascot for Okinawa’s Jungle Warfare Training Center at Camp Gonsalves until his death Sept. 3 at age 11. A rare form of liver cancer accomplished what over a decade living in Okinawa’s treacherous jungles could not.

Bear was impossible to miss, a 140-pound oak barrel with legs, and a big heart to match. He was never far behind the units at the training center, offering a reassuring cold nose in the hand or a bark to warn of impending dangers like jungle pigs or snakes.

A memorial service was held Jan. 11 to say goodbye to a Marine who had truly mastered jungle survival.

“He was just one of the guys, you know,” Navy corpsman Petty Officer 2nd Class Phillip Morris said Thursday by phone from the center, where he was charged with Bear’s medical care the past two years. “He did the training and then came inside the Habu Pit (lounge) where everybody hangs out at night, then he’d find someone’s room to sleep in and that’s it.”

However, Bear was a puppy when he arrived in the remote Northern Training Area town of Higashi on Feb. 16, 2009. Right away, the Marines could see the little dog was different.

Bear insisted on always being with the Marines and eating what they ate. He could often be seen relentlessly giving his paw to a Marine chowing down on a Meals Ready to Eat, begging for scraps which were readily given.

Given free run of the remote jungle warfare training base, Bear would often appear at the Marine bivouacs as they prepared for training. He was a constant presence throughout and would mill around at the briefings and laze on the warm pavement.

Bear never bristled at anyone trying to pet him. He was always smiling, and his tail would wag more and more violently the closer one got to him.

He ballooned to 135 pounds near the end of his life, but that didn’t stop him from scaling sharp jungle cliffs like a mountain goat.

In 2015, Marines from 3rd Battalion, 2nd Marines, were traversing a rocky jungle stream with high walls on either side, heading to a natural pool called the “Slide for Life” where they would practice making flotation devices out of their gear. They seemed to be in the middle of nowhere and had already killed one habu snake.

A commotion of shaking branches and leaves on the steep cliffside to their right flank spooked everyone – until a smiling Bear emerged through the bush. He peered down at the Marines and then disappeared. His presence could be felt for the rest of the hike.

Afterwards, a lance corporal threw up bright yellow chunks of macaroni on the pavement by the stairs down to the stream. Bear was there to lap it all up.

Every morning, Bear would go on physical training runs with the Marines. He would keep up for a little while, McGuire said, but would soon fall behind. The Marines would be resting briefly before turning back when Bear would jog up gasping.

Bear would also follow the Marines through each iteration of the training center’s vaunted E-Course, complete with mud pits, obstacles, ropes and water, Morris said. He would always go with the first group.

Bear worked tirelessly to get back in shape before his passing. After being temporarily “demoted” by a cheeky camp medical staff, he ate a restrictive diet and was dropped off a couple of miles from home each day, Morris said with a laugh.

Bear always found his way back. After losing more than 40 pounds, he was reinstated as a lance corporal.

McGuire, who wasn’t too keen on the smelly dog at first, said Bear helped him get through much of his tour away from his family. The dog’s tail wagged enthusiastically to the very end.

Bear's ashes rest in honor at Camp Gonsalves with the base’s other previous mascots.

“I won’t forget him just being there, helping out with morale,” McGuire said.