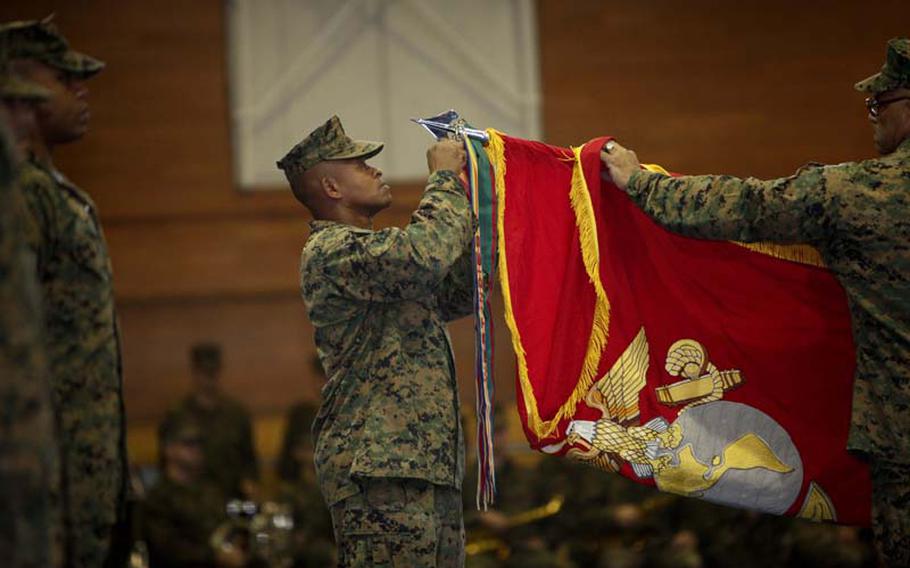 CAMP FOSTER, Okinawa &ndash; The Marine Corps is building up its middleweight force in the Pacific.

This week, the service created a permanent command structure on Okinawa for the 3rd Marine Expeditionary Brigade, a unit that has been activated temporarily for crises and multi-national exercises for more than a decade.

The move comes on the heels of efforts by the service to redefine its role within the military following a decade of land wars. In September, Marine Commandant Gen. James Amos sent a letter to the secretary of defense staking out his vision of a fleet-footed, &ldquo;middleweight&rdquo; crisis response force that operates quickly and lethally over the world&rsquo;s oceans.

The permanent brigade command created Tuesday at Camp Courtney means such a force will be standing ready in the Pacific to respond to conflicts and &ldquo;allow us to do that against a little bigger threat,&rdquo; said Col. John Ostrowski, chief of staff for the 3rd MEB, who spoke with Stars and Stripes on Monday.

Under the new 3rd MEB command, the brigade can swoop in fast and kick down bigger doors to make way for more U.S. forces.

&ldquo;It truly would be the initial theater force,&rdquo; with the Marine Expeditionary Force coming in afterward, Ostrowski said.

The core of the brigade will be comprised of the 4th Marine Regiment, Marine Aircraft Group 36 and a combat logistics regiment, but its size and makeup with remain highly flexible, he said.

Commanders will be able to mix and match units for a scalable force of 7,000 up to 15,000 Marines pulled from existing Pacific forces, depending on the mission. By comparison, the 31st MEU has about 2,200 and III MEF has about 26,000 troops.

&ldquo;There are not formally assigned units,&rdquo; Ostrowski said. &ldquo;We will form habitual relationships with units that will fill the [brigade] out.&rdquo;

Despite the formal stand-up ceremony Tuesday, it will take about two years to fully staff the brigade command. About 35 personnel will come over the next year and another 60 will arrive in fiscal year 2013, he said.

The history of 3rd MEB goes back to 1917 and it has been reactivated during most of the major conflicts over the past century, including World War II, the Korean War, and Vietnam.

Since its reactivation in the Pacific in 2000, the brigade has operated with a provisional command and kept busy with multi-national training exercises &ndash; the Marines here participate in about 70 such exercises each year &ndash; as well as disaster relief in Indonesia, the Philippines, and most recently earthquake-ravaged Japan.

It is a role that will only become more important in the coming years according to U.S. leaders.

In November, President Barack Obama said he has made the Asia-Pacific region a top priority for his national security team and the U.S. will remain involved here for decades to come.

It is familiar territory for the Marine Corps.

&ldquo;You can see the country is strategically reorienting to the Pacific,&rdquo; Ostrowski said. &ldquo;The Marine Corps has always been a Pacific Force.&rdquo;