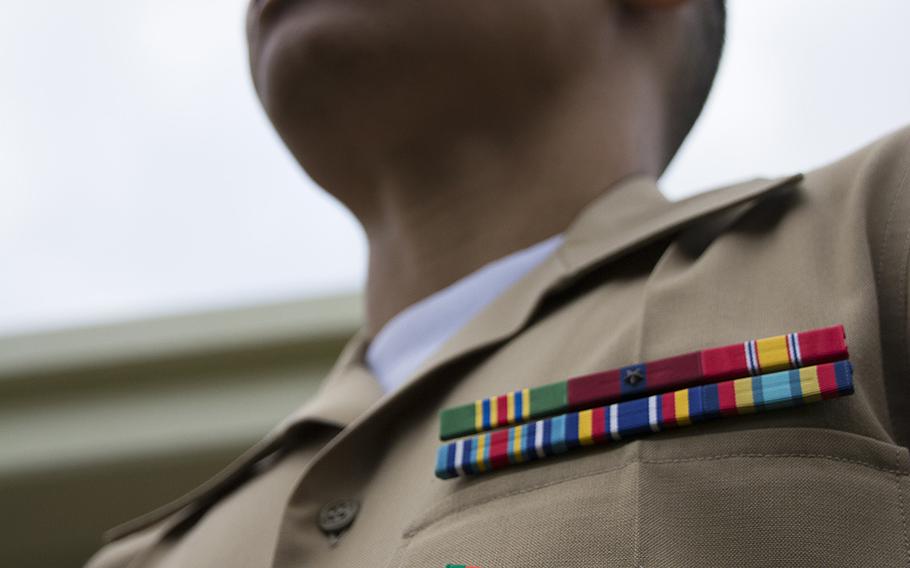 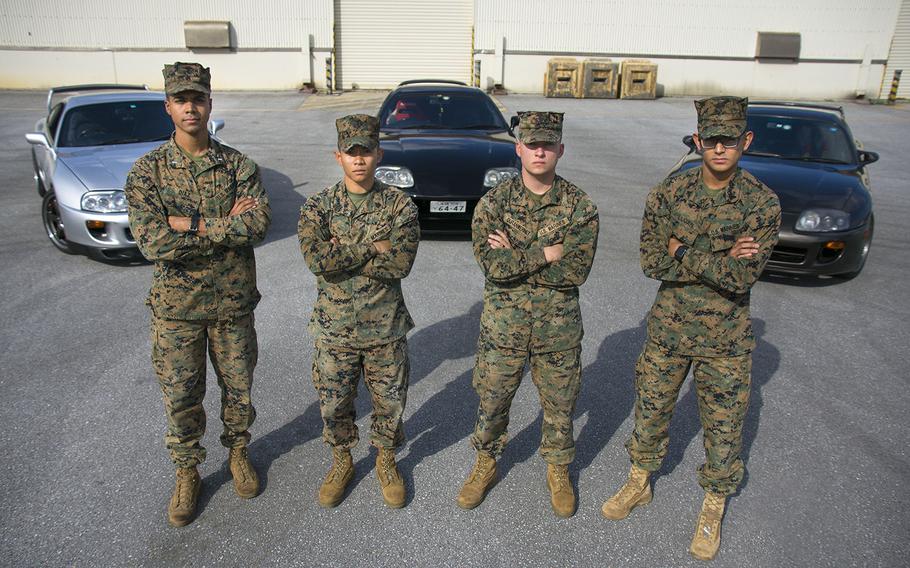 From left to right: 1st Lt. Jose Antonio Diaz Jr., Sgt. David Nguyen Lam, Cpl. Devon Duran-Wernet and Cpl. Gerardo Lujan pose with their cars Jan. 24, 2019, at Camp Foster, Okinawa. The Marines were among those who responded to a motorcycle accident in northern Okinawa on New Year's Eve. (Carlos Vazquez/Stars and Stripes) Airman 1st Class Chace Wozniak was touring in northern Okinawa that afternoon alongside a group of five Toyota Supras — including one driven by Sgt. David Nguyen Lam — when he collided with a pair of roadside barriers and a water pipe. His left femur and right arm were broken, and bones were protruding from his body.

Lam and other Marines involved that day recently told Stars and Stripes how they relied on their training and basic lifesaving skills to assist the injured airman.

“Being in the military, it gave me more confidence in this situation to know that I could do something,” Lam said. “Instead of being in shock, I was able to give a quick reaction.”

Lam was decorated by Lt. Col. Matthew Mulvey, commanding officer of the 3rd Transportation Support Battalion, during a Friday morning formation at Camp Foster. It was unclear whether the other Marines involved would also be honored.

“I had an ‘oh, snap’ moment,” Lam said when recalling the crash. “I put my emergency brakes on. I stopped and ran towards [Wozniak].”

Lam, the first at the accident scene, was soon joined by six Marines in the four other Supras. The group had started at 8 a.m. on a farewell ride for one of their drivers.

“We cruised around Okinawa to look at the scenery … and stopped at certain areas to take pictures of our cars,” Lam said.

Wozniak, assigned to 353rd Special Operations Aircraft Maintenance Squadron, crossed paths with the Supras around 1 p.m. as their drivers turned back toward a missed exit. He complimented the crew on their vehicles and asked to join the ride, said Cpl. Devon Duran-Wernet.

Less than 30 minutes later, Wozniak maneuvered from the rear of the pack to the middle and in front of Lam. He took a turn on the curvy, two-lane road, struck two roadside barriers and hit a water pipe, according to the Marine witnesses. They said Wozniak appeared badly injured.

Duran-Wernet, of the 3rd Law Enforcement Battalion, said he had a bad feeling something had happened before coming around the corner.

“I got a little closer and saw Sgt. Lam’s vehicle stopped with its hazards on and quickly realized the bike wasn’t in front of me anymore,” he said. “I saw the bike wedged in between the poles and ran to help him.”

Lam said a Japanese woman who lived nearby called an ambulance, and the other vehicles in the group turned around to assist.

When Cpl. Gerardo Lujan of Bravo Company, also of the 3rd Law Enforcement Battalion, arrived, he asked the woman for scissors to cut Wozniak’s clothes to look for injuries.

“She took me to her house,” Lujan said. “I saw a piece of wood, too, that I took to use as a possible splint.”

All seven Marines played individual roles: Some applied first aid to the injuries on Wozniak’s arms and legs; others supported his head to lessen the possibility of injury to the neck and back.

“That’s what gave me so much confidence in this situation, being with a group of Marines that I didn’t know that well before this,” he said. “Everybody knew to do the right thing.”

At about 2 p.m., an ambulance took Wozniak to a helicopter that carried him to emergency care.

He sent the Marines text messages after the accident, thanking them for their response.

“A mere thank you to the Marines and responders is invalid,” said Wozniak in an email sent to Stars and Stripes through a 353rd Special Operations Group spokesperson.

“The Marines who were there that day will forever have an impact on my life,” said Wozniak, who is expected to make a full recovery. “The scars across my body serve as a constant reminder that I am able to continue life to my new normal, thanks to them.”