A Chilean and U.S. Marine practice clearing a room together during urban operations training as part of Rim of the Pacific exercise at Marine Corps Base Hawaii, June 28, 2018. (Miguel Carrasco/U.S. Marine Corps photo)

A Chilean and U.S. Marine practice clearing a room together during urban operations training as part of Rim of the Pacific exercise at Marine Corps Base Hawaii, June 28, 2018. (Miguel Carrasco/U.S. Marine Corps photo) 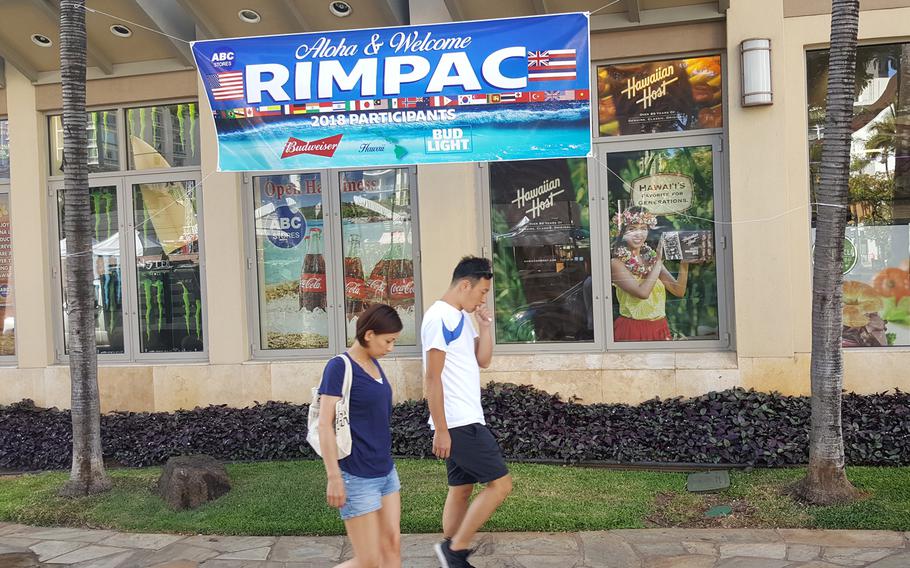 Buy Photo
A banner displayed outside a convenience store on Waikiki Beach welcomes the thousands of mariners in Hawaii who have arrived for RIMPAC, which runs through Aug. 2. (Wyatt Olson/Stars and Stripes) 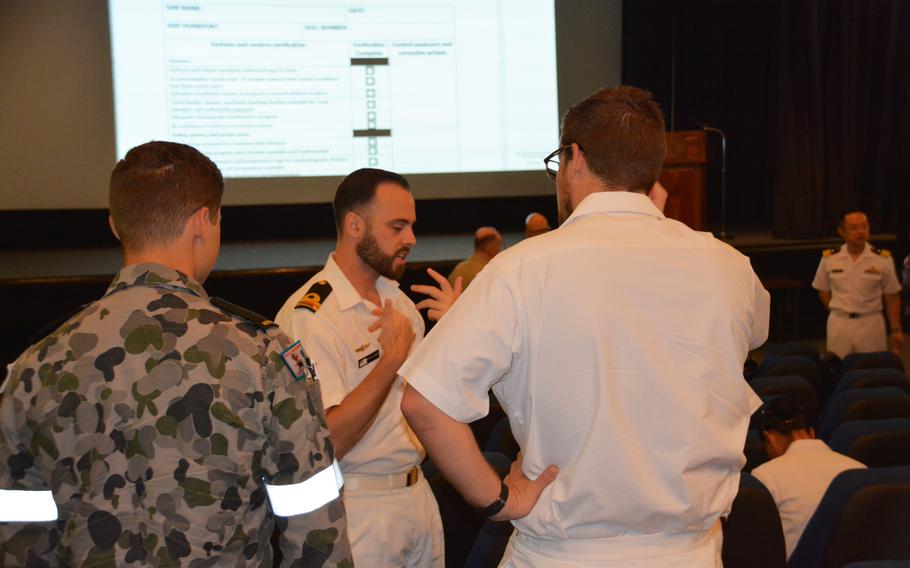 Buy Photo
Medical personnel chat during a break at Joint Base Pearl Harbor-Hickam July 6 during a break in a two-day symposium held as part of the Rim of the Pacific exercise. (Wyatt Olson/Stars and Stripes) An Australian soldier swims to shore during a drill as part of the Rim of the Pacific exercise on Marine Corps Base Hawaii, June 29, 2018. (Thomas Miller/U.S. Marine Corps photo) 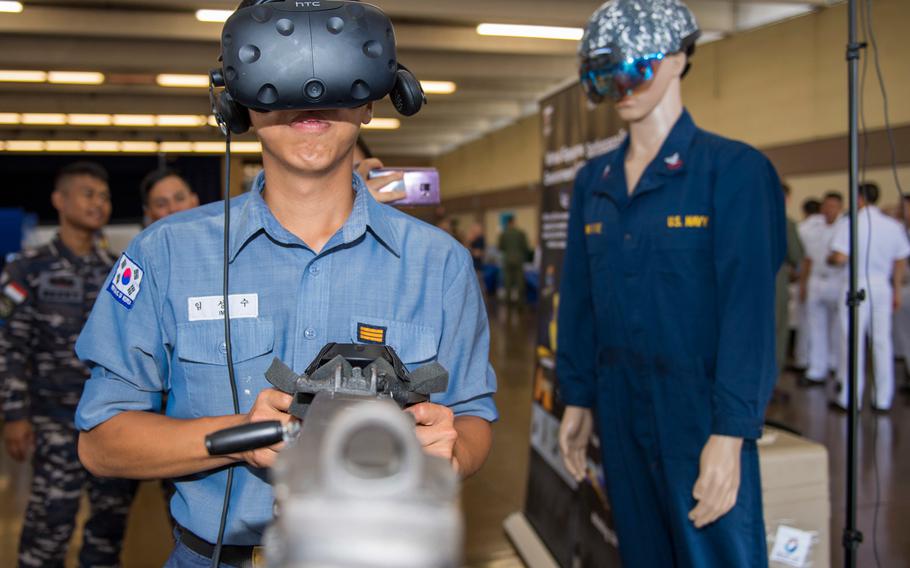 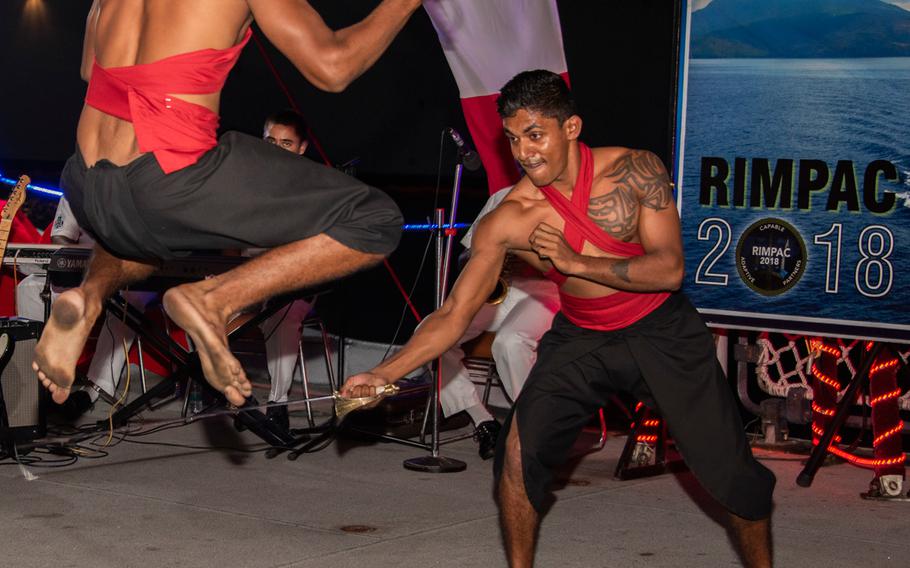 Sailors assigned to the Indian Navy frigate INS Sahyadri perform a traditional dance during a reception at Pearl Harbor July 5, 2018, as part of Rim of the Pacific exercise. (Natalie Byers/U.S. Navy photo) A U.S. Marine with the 3rd Reconnaissance Battalion jumps from a CH-53E Super Stallion helicopter July 2, 2018, during amphibious drills as part of Rim of the Pacific exercise on Marine Corps Base Hawaii. (Thomas Miller/U.S. Marine Corps photo)

JOINT BASE PEARL HARBOR-HICKAM – French Navy Lt. Gaetan Lamour faces plenty of challenges as the sole doctor aboard a French frigate — but coping with the isolation at sea isn’t something he learned about in medical school.

“You can feel really alone because the Pacific Ocean is so vast,” said Lamour, a crewmember on the Prairial, one of the 41 vessels now in Hawaii for the biennial Rim of the Pacific exercise.

“You really feel on your own during all those weeks,” he said. “Finally, when you arrive at RIMPAC you see all the ships, the sailors, all the medical providers, and it really feels great. Like a family, we do the same jobs.”

As RIMPAC winds up its first week, many of the 25,000 personnel who have gathered in Hawaii and Southern California spent this initial “ashore” phase getting to know their international counterparts as much as they did sharing information, or training for upcoming amphibious and at-sea drills.

“I think for all of RIMPAC, there is a social and networking aspect to the exercise — and that’s not by accident,” said Lt. Cmdr. Johnathan MacDonald with the Royal Canadian Navy, who is serving as a medical planner for the exercise. “It really allows us during the first week, when we get on ground, to meet one another — the partners we will be working with.”

“This is my first RIMPAC, and it’s been an extraordinary experience so far,” he added. “I’ve never personally experienced any such military opportunity where there are so many different nations involved.”

MacDonald coordinated exchanges of medical personnel between three ships on Monday and Tuesday — including aboard the Australian HMAS Adelaide, where medical personnel demonstrated the challenges of moving an injured patient through the ship’s narrow passages, ladders and stairs.

“It’s potentially small challenges that can grow into bigger ones when a patient is injured on one end of the ship and needs to be moved to the surgical area,” he explained.

Meanwhile, troops at Marine Corps Base Hawaii spent the week training with counterparts from partner nations such as Australia, Chile, the Philippines, and Japan. The training included small-unit insertions via parachute and rubber raft, urban-clearing operations, and small-arms live fire.

Music has also provided a chance for the international mariners to mingle with each other, as well as with members of the public.

Musicians from the Royal Australian Navy, Royal Canadian Navy, Indonesian Navy and the U.S. Pacific Fleet performed together Sunday at the Defense Department-owned Hale Koa hotel on Waikiki Beach, while American grunge rockers Stone Temple Pilots performed for an international audience at Joint Base Pearl Harbor-Hickam on the Fourth of July.

Another opportunity for interaction in the opening days of the exercise came during the inaugural Innovation Fair, which drew 2,000 visitors to Pearl Harbor-Hickam during its two-day run on June 29 and 30.

“This Innovation Fair provided an ideal platform for our international participants to experience face-to-face interactions with partners-at-sea,” said Cmdr. Brett Elko, who is assigned to the Third Fleet, in a Navy statement.

Despite the opportunities for global partnership and cross-cultural socialization, the influx of thousands of mariners to Oahu during RIMPAC does bring some inconvenience for Honolulu residents.

Flyovers by helicopters and jets are routine throughout the exercise, and increased traffic near Pearl Harbor often causes delays for drivers.

The Navy also notified residents that electromagnetic activity generated by the presence of so many ships can affect remotely controlled garage-door openers, by either making them open spontaneously or preventing remotes from working temporarily.