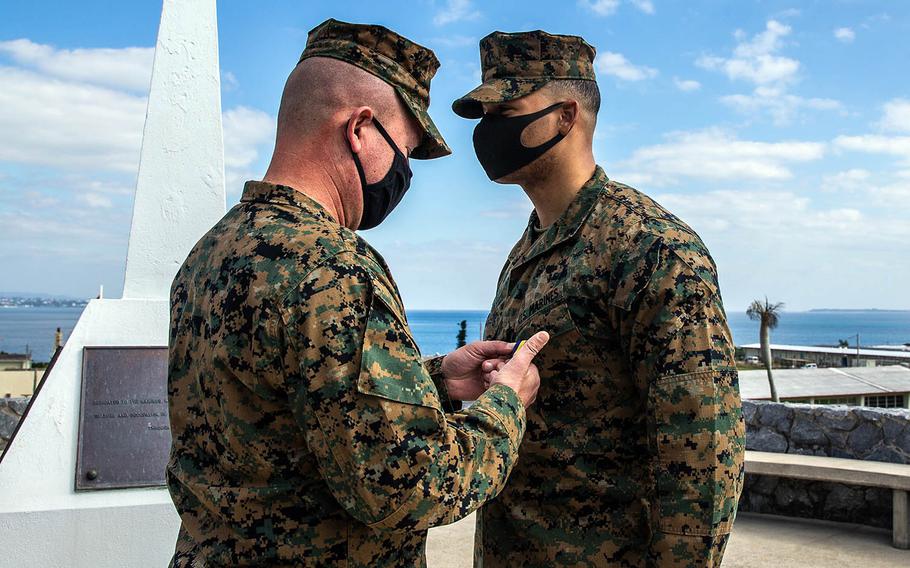 CAMP FOSTER, Okinawa — An Okinawa-based Marine who helped rescue a comrade threatening suicide in 2018 has received a medal for his lifesaving actions.

Sgt. Brandon Antoine, a 3rd Marine Division radio operator, was awarded the Navy and Marine Corps Medal during a ceremony at Camp Courtney on Jan. 13, according to a Marine statement released last week. Division commander Maj. Gen. James Bierman presided over the ceremony.

The New Orleans native was awakened by a commotion early on the morning of June 16, 2018, according to a copy of his citation. He rushed outside Camp Courtney’s Barracks 4433 and saw an intoxicated Marine threatening to take his own life by jumping off a fourth-floor air duct.

The air duct was slick with rain and Antoine feared the Marine might slip and fall to his death even if he did not jump, the citation said.

Antoine ran up four flights of stairs and helped Marines pry open a locked bathroom door, according to the citation. He then instructed two Marines to hold his legs and waist as he leaned out from the window. He hung upside-down 45 feet above the ground for over 10 minutes.

“Despite the risk of severe injury to himself, Sergeant Antoine demonstrated poise and resolve as he kept the Marine calm and communicated with the rescue team below, providing the fire department time to raise their bucket and recover the Marine,” the citation said. “By his courageous and prompt actions in the face of great personal risk, Sergeant Antoine reflected great credit upon himself and upheld the highest traditions of the Marine Corps and the United States Naval Service.”

The Navy and Marine Corps Medal is the highest non-combat decoration for heroism that is awarded by the service.

The award took over two years to process due to a high level of scrutiny placed upon recommendations, 3rd Marine Division spokesman Maj. Kurt Stahl wrote in an email to Stars and Stripes.

“The Navy and Marine Corps Medal is not an award that is taken lightly, and it requires approval from the Commandant of the Marine Corps, which demonstrates just how heroic Sgt Antoine’s actions were the day he saved the life of a fellow Marine,” he wrote.

Antoine declined to be interviewed for this story for “personal reasons,” Stahl said.

Bierman praised Antoine’s heroism in a statement emailed to Stars and Stripes on Thursday evening.

“When faced with a dangerous and unfolding situation, he conducted himself in the best traditions of the Marine Corps," Bierman wrote. "His actions were bold and decisive; he didn’t hesitate to risk his own life to save a fellow Marine. It was an honor to be part of the ceremony in which he was recognized."