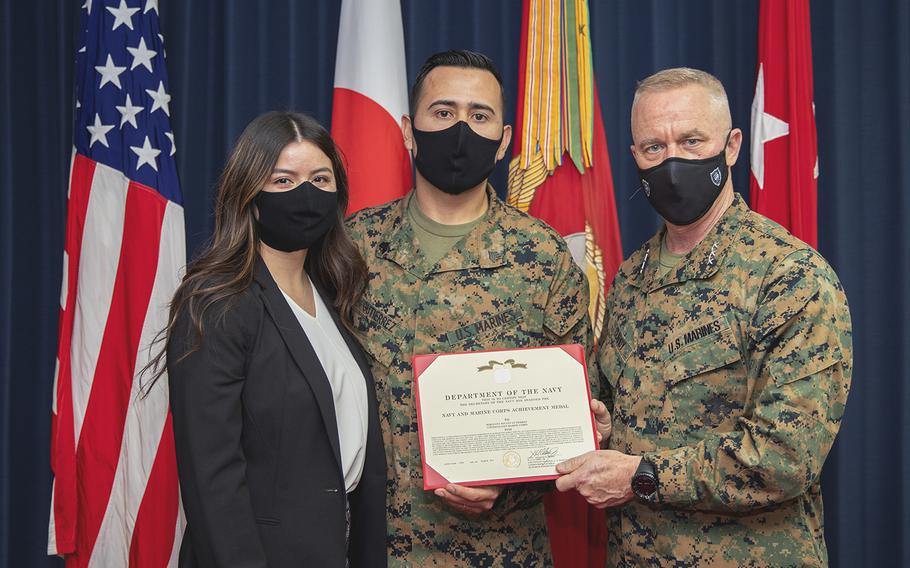 CAMP FOSTER, Okinawa — An Okinawa-based Marine who rescued a local woman from a dark, busy roadway earlier this year has received a medal for his actions.

Marine Sgt. Jovany Gutierrez, 27, a military police officer and the driver for III Marine Expeditionary Force commander Lt. Gen. H. Stacy Clardy, was awarded the Navy and Marine Corps Achievement Medal during a ceremony at Camp Courtney on March 12, according to a Marine statement shortly after the ceremony. Clardy presented the award.

Gutierrez, of Albuquerque, N.M., was on his way to work around 5 a.m. Jan. 6 when he spotted a young Japanese woman in his headlights, he recalled during an interview March 24 at Camp Courtney.

The woman stumbled along the sidewalk, dangerously close to the roadway, on Route 224 near its intersection with Route 8 in Uruma, Gutierrez said. He drove past carefully.

“As I looked in my rearview mirror, I saw her collapse in the middle of the road behind me,” he said. “In the distance I saw some vehicles coming up… I knew the dangers that posed to both her and the possible driver.”

Gutierrez — a dog handler and seven-year Marine — said he acted fast. He pulled his car around, placing it between her and the oncoming traffic on the poorly lit roadway.

He then tried to flag down the oncoming vehicles to warn them while at the same time trying to communicate with the young woman. She was in and out of consciousness and did not speak English.

“I asked her and pointed to the sidewalk to see if I could motivate her to get herself up and move towards the sidewalk,” he said. “She wasn’t in a good state. Her legs were failing her at that moment. She was out of it, unfortunately.”

Gutierrez picked the woman up and carried her to the sidewalk, he said. She then went on what he calls “an emotional roller-coaster,” drifting back and forth between breathing easy and relaxing to hysterical, yelling and convulsing.

He waved down another Marine who was able to help. They placed the woman in the recovery position and waited for paramedics, who had been called by another driver, to arrive.

“We were trying to keep her at ease and tell her, ‘Hey, it’s okay; we’re getting you help,’” he recalled.

Gutierrez said the paramedics told him the woman would be fine.

He briefed his command on what had happened, and they began the paperwork for the achievement medal without his knowledge, he said.

“It was pretty heart-warming,” he recalled.

The Navy and Marine Corps Achievement Medal is awarded to service members below the rank of colonel for meritorious service or achievement in combat or noncombat. The medal can either be used to recognize sustained performance or a specific achievement that does not warrant a higher award.

“He regularly demonstrates selflessness in the workplace, and during his off-duty time,” Sullivan wrote Thursday in an email to Stars and Stripes. “He has always gone above and beyond to assist others in his section and around him.”

Gutierrez dedicated his award to all the Marines on Okinawa performing heroic actions every day.

“I knew I had to do something,” Gutierrez said of the rescue. “I’d like to think anyone would do the same thing. It’s especially our duty as Marines stationed here on Okinawa.”