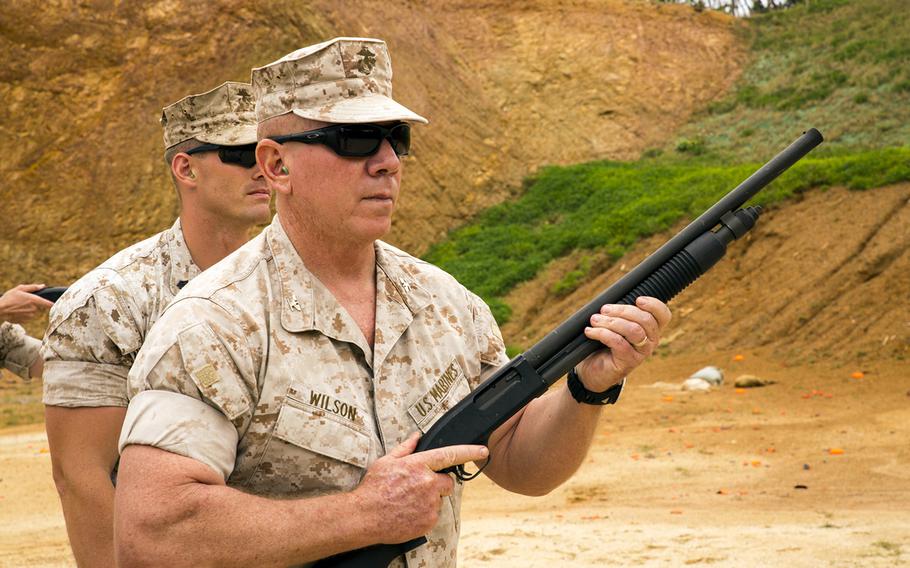 A three-judge panel from the U.S. Navy-Marine Corps Court of Criminal Appeals in July overturned a child sex abuse conviction against Marine Col. Daniel Wilson without ever hearing from the 7-year-old accuser in person.

In a move unique to military justice, the appellate judges supplanted the court-martial jury’s decision and made their own determinations about Wilson’s guilt.

However, unlike the jury, they saw no witnesses testify, including the alleged victim, and made their decision based solely on trial transcripts and videotaped interviews from early in the investigation.

The panel overturned the verdict of the jury’s four generals and three colonels, citing a legal standard known as “factual sufficiency.”

The July dismissal angered the family of the girl, who was 6 when the abuse allegedly occurred, as well as advocates for victims of sexual abuse who argue that civilian appellate courts could not, in most cases, make a similar decision.

Wilson was released from the brig in October and just last week, allowed to retire, while the girl’s parents, Marine Lt. Col. Breck Perry and his wife, Adrian Perry, began to lobby members of Congress to change the Uniform Code of Military Justice to strip factual sufficiency review powers from military appellate judges and bring the UCMJ more in line with the civilian justice system.

“The powers of factual sufficiency review given to military criminal appeals courts need to be revoked,” Breck Perry said at a news conference Oct. 4 in Okinawa, Japan, where he is stationed.

“As it stands now, [appellate judges have] the ability to overturn a conviction of a predator based solely on his/her interpretation of a cold stack of court papers,” he said. “Under its current construct, the criminal appeals process is a failed system that requires an overhaul now.”

During a court-martial in 2017, Wilson was convicted of the sexual abuse of a child, six counts of conduct unbecoming of an officer and a gentleman and absence without leave. He was sentenced to 5 ½ years in prison and dismissed from the service. His wife, Susan Wilson, denied the charges against her husband in multiple emails to Stars and Stripes after the conviction.

The Perry family sued the Marine Corps for $25 million in June 2018 for not punishing Wilson for earlier misconduct, which, they alleged, allowed him to prey on their daughters, but they later dropped the suit.

Sufficiency of the evidence means there is evidence of each element of the crime, without regard to the strength of that evidence, said Anthony Musto, co-executive director of the American Bar Association Criminal Justice Section’s Specialized Practice Division. This means, if the evidence is believed, in a light most favorable to the prosecution, a reasonable jury could convict.

Weight of the evidence is a measure of whether evidence points jurors to one side or the other, such as a conviction, he said.

In the July 1 appellate decision, Senior Judge Navy Cmdr. Angela Tang took issue with the weight of the evidence against Wilson.

There was no other compelling evidence in the case, the panel’s decision states. Without ever seeing the alleged victim testify under oath, the panel dismissed the charges with prejudice, meaning they cannot be refiled.

“This is a particularly cruel result,” said Don Christensen, a former Air Force chief prosecutor, military judge and current president of Protect Our Defenders Foundation, a nonprofit dedicated to ending rape and sexual assault in the military. Christensen and the foundation provided legal assistance and support to the Perry family in their suit against the Marine Corps.

“It is not easy to go through a court-martial, especially as a child, and to later have three adults sitting in an office in [Washington,] D.C. attack your credibility having never met you, never observed you, is just not what American justice is about.”

On Feb. 5, Assistant Secretary of the Navy for Manpower and Reserve Affairs Gregory Slavonic allowed Wilson to retire with an “other than honorable” discharge as a lieutenant colonel, according to a copy of the decision. He declined to consider the sexual abuse allegations made against Wilson.

Second-guessing Having someone accuse another person of sexual abuse and testify under oath is generally considered enough evidence to send a case to a judge or a jury, meeting the bar for sufficiency of the evidence. The weight of the evidence is then left up to the judge or jury to decide.

In the civilian justice system, appellate judges generally won’t consider challenges to weight of the evidence, Musto said. “There’s a reason for that. The trier of fact – the jury or the judge — they observe things. They hear the tone of voice; they see the facial expressions; they see the body language of all of these people that are testifying. … Appellate courts tend very much to say, ‘We’re going to let that trier of fact make that determination.’”

The federal courts are similar, according to Lisa Schenck, former senior Army appellate judge and George Washington University Law professor. They are required to view evidence in the light “most favorable to the government, resolving conflicts in the government’s favor, and accepting all reasonable inferences that support the verdict,” Schenck wrote in a 2016 paper in the Southwestern Law Review. They will not second-guess credibility determinations made by judge or jury in lower courts.

In the military system, the opposite is true.

Convictions are not affirmed by military appellate courts unless the judges believe in guilt beyond a reasonable doubt, which essentially means the cases are retried. Military appellate judges don’t have to give any deference to decisions made at earlier trials.

“What it’s saying is we don’t trust court members in the military to deliver verdicts that are appropriate,” he said. “And if you don’t have enough trust in the very foundation of your justice process, then I don’t know why you have a justice process.”

‘Outdated’ The Defense Department in 2015 recommended that Congress amend the UCMJ code that covers courts of criminal appeals and factual sufficiency as part of the Military Justice Act of 2016, DOD spokeswoman Lisa Lawrence wrote in an email to Stars and Stripes.

Military legal experts recommended forcing appellate judges to give deference to the trial court on “controverted questions of fact,” the recommendation said.

While appellate judges would still have the authority to overturn a conviction, they would have to be “clearly convinced the finding was against the weight of the evidence.”

The Senate passed the reform as proposed, but it was rejected by the House Armed Services Committee and stricken from the final defense authorization bill, Lawrence said.

Legal scholars and academics, however, overwhelmingly favor the reform. They point to two UCMJ articles — prohibiting and punishing unlawful command influence — to show that the factual sufficiency review of weight of evidence is no longer needed.

“I would advise it to be removed,” the Reserve Army lawyer said.

Kastenberg and Pinsker mentioned other actions that could strengthen the independence of the judiciary and protections for the accused, such as separating military judges from the Judge Advocate General’s Corps and requiring unanimous trial verdicts.

“This [power] is dangerous,” she said. “This allows judges to decide based on words on a paper that they don’t believe a witness. That is the quintessential job of the jury,” she said. “The military factual sufficiency review is a complete anachronism and it should have been eradicated from the military justice system decades ago.”

Adrian Perry knows it will be an uphill battle to get members of Congress to reconsider factual sufficiency review.

“Our family has been put through absolute hell between the loss of innocence in our child at the age of 6 and her stolen justice from the Navy-Marine Corps Court of Criminal Appeals,” Perry said. “What happened to our daughter at the appellate level of military justice is a disgrace to our country and an embarrassment to the military justice system.”