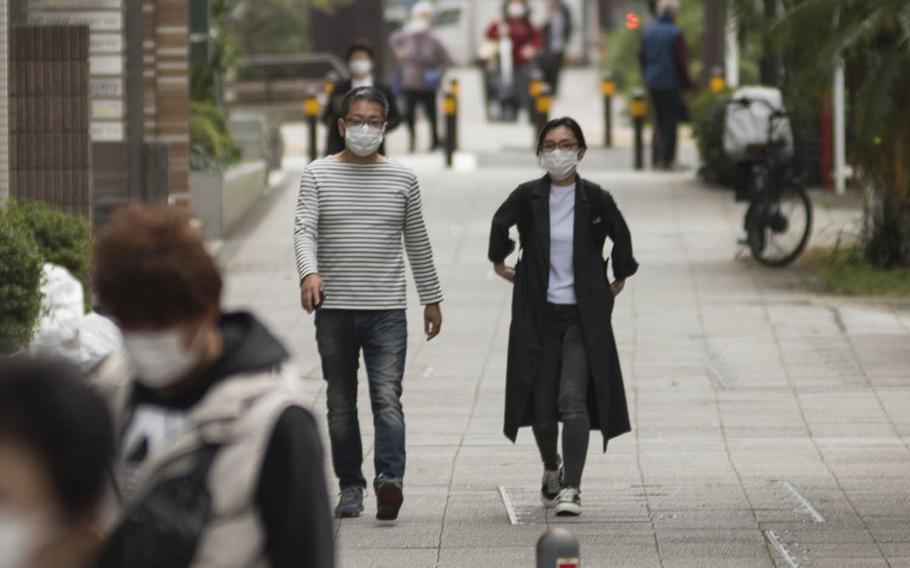 Buy Photo
People wear masks to guard against the coronavirus while strolling in Yokohama, Japan, Nov. 20, 2020. (Akifumi Ishikawa/Stars and Stripes)

TOKYO – The U.S. Marine Corps announced 72 new cases of the coronavirus Monday on Okinawa, more than the service has reported there in over a month.

All those cases, divided between two bases, were discovered among personnel recently arrived from the United States and still in the 14-day isolation period, Marine Corps Installations Pacific said in a Facebook post.

The new patients came up positive on a test required of all U.S. military personnel in Japan before they are permitted to leave quarantine.

Fifty-two of the patients are at Camp Hansen and 20 are at Marine Corps Air Station Futenma, according to the Facebook post.

“There is no risk to the off-base community or to the larger military and civilian populations aboard either” installation, the Marines said. “These are all personnel who traveled from the U.S, and who have been in a [restriction of movement] status since their arrival.”

The Marines stopped publicly reporting their Okinawa cases in early November, but during the summer accounted for more than 300 during an outbreak that began in July. Other U.S. military commands in Japan and South Korea since Friday confirmed 23 new coronavirus cases, some stretching back three weeks. U.S. Forces Korea reported 14 new cases, all but one of them new arrivals to the peninsula since Nov. 9. The one exception, a soldier posted to Camp Casey, tested positive Saturday and was quarantined at the Camp Humphreys hospital in a room designated for coronavirus patients, the Army said in a news release. USFK broke down the other cases this way: Four service members arrived at Osan Air Base via Patriot Express charter flights on Nov. 9, 11, 16 and 23. Seven other service members and two dependents arrived via commercial flights at Incheon International Airport on Nov. 10, 17, 20, 24, Wednesday, Friday and Sunday. Seven tested positive upon arrival on their first test; six tested positive on their second test, according to the Army. All are in quarantine at either Osan or Humphreys. Back in Japan, Sasebo Naval Base on the island of Kyushu reported one new case Monday; Kadena Air Base on Okinawa reported six new cases Sunday; and U.S. Army Japan reported one new case on Monday and two on Okinawa on Friday, according to Facebook posts and Army news releases. All of those patients were already in isolation, according to their commands. The Army patients and those in Sasebo were new arrivals. The six with the Air Force recently returned from abroad and were tested Friday, according to an 18th Wing email Monday. The Army said its Okinawa patients are family members who arrived recently at Kadena and were tested Nov. 24. The Army patient announced Monday was tested Saturday by Japanese health authorities, according to an Army news release. Japanese tests typically take place after the individual arrives at one of the country’s international airports aboard a commercial flight. The Army, headquartered at Camp Zama, west of Tokyo, did not specify where that patient is located. None of the three Army patients showed any symptoms of COVID-19, the respiratory disease caused by the coronavirus, the Army said. U.S. commands in Japan do not always specify whether their new cases are service members, civilian employees or family members. While a record-breaking viral surge continued in both countries, the daily count of new cases in some areas declined over the weekend, a common phenomenon during the pandemic. Japan reported 2,585 new cases on Sunday, a new pandemic high, according to the World Health Organization. Tokyo, which on Friday reported an all-time high of 570 new cases, on Monday reported 311, according to public broadcaster NHK. South Korea’s nationwide count fell steadily over the weekend from 583 new cases on Thursday before rising again to 414 on Monday, according to the Korean Disease Control and Prevention Agency. Dotae Kang, coordinator of the Central Disaster and Safety Countermeasure Headquarters, during a briefing Monday, said small-scale spreading traced to multiuse facilities such as gyms, aerobic dance academies, private educational institutes and saunas is becoming mass infections when people gather with their families, co-workers and acquaintances. “If this situation continues, a third wave of the COVID-19 pandemic is highly likely to be extended for a long time during the year-end holiday season,” Kang said, “when a lot of contact from person to person and movement among people take place.” Above all, he said, the government “earnestly requests” people to cancel gatherings of more than 10 people.