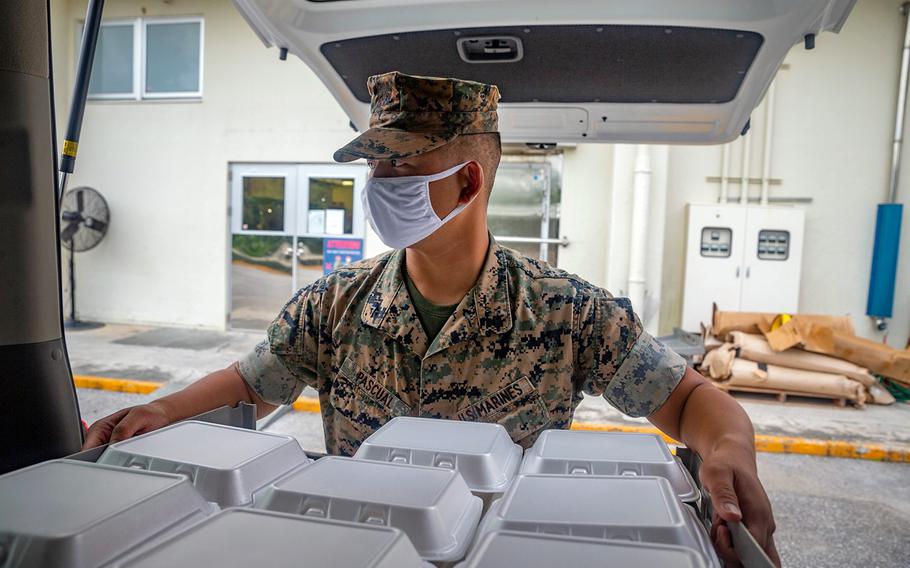 The Marine Corps on Okinawa has reported a total of 225 coronavirus infections from two clusters discovered on the island after Fourth of July weekend. Many of those have since recovered. (Karis Mattingly/U.S. Marine Corps)

CAMP FOSTER, Okinawa – The Marine Corps on Okinawa reported 41 new coronavirus cases on Friday and another 31 over the weekend, bringing to 225 the total from two clusters discovered after Fourth of July weekend.

Twenty-seven of those cases stem from a cluster outbreak at Marine Corps Air Station Futenma, while the other 14 are at Camp Hansen, site of the other outbreak.

On Saturday, 23 new infections were announced by Marine Corps Installations Pacific. Twenty-two of those cases, which were identified through the trace-and-test process, are related to the Camp Hansen cluster and one recently arrived from the United States, according to a statement posted on Facebook.

"These 22 individuals have been in quarantine for at least a week," the statement said.

The new arrival is listed as attached to Camp Courtney because that is where the person’s sponsor works or is stationed, Kunze wrote in an email Sunday to Stars and Stripes.

"This individual has been in [restriction of movement] in base housing since July 10, and has had limited contact with any personnel," the Marine statement said.

On Sunday, eight new infections were announced by Marine Corps Installations Pacific. Seven belong to the Camp Hansen cluster and have been in quarantine "for nearly two weeks" due to the Marines’ policy to "test all individuals in quarantine" with "close contact" to infected persons before being released, a statement said.

The other individual works at Camp Foster and was a close contact of someone who recently tested positive in the MCAS Futenma cluster, Kunze wrote in his email Sunday.

Since Friday, 82 Marines involved in the cluster outbreak have been released from isolation after recovering, according to the Marine Corps. They join 27 others released earlier last week.

To date, the service has reported 116 cases at Camp Hansen and 109 at MCAS Futenma.

The 18th Wing at Kadena Air Base also announced a new positive case Friday. The individual tested positive before leaving the 14-day quarantine period mandated upon arrival on Okinawa and had no contact with anyone on or off base, a wing statement said.