Marine Corps beefs up its Osprey presence in Hawaii 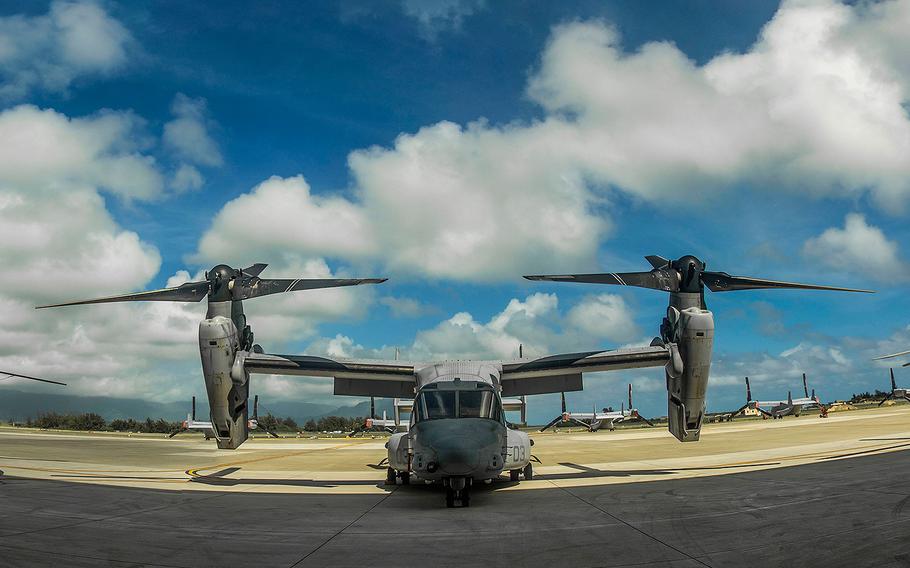 A MV-22B Osprey helicopter is on display during a dedication ceremony at Marine Corps Air Station Kaneohe Bay, Marine Corps Base Hawaii on Sept. 21, 2018. The ceremony celebrated the arrival of Marines with VMM 363 and everyone who assisted in the construction of the hangar. (Aaron S. Patterson/U.S. Marine Corps)

A MV-22B Osprey helicopter is on display during a dedication ceremony at Marine Corps Air Station Kaneohe Bay, Marine Corps Base Hawaii on Sept. 21, 2018. The ceremony celebrated the arrival of Marines with VMM 363 and everyone who assisted in the construction of the hangar. (Aaron S. Patterson/U.S. Marine Corps) 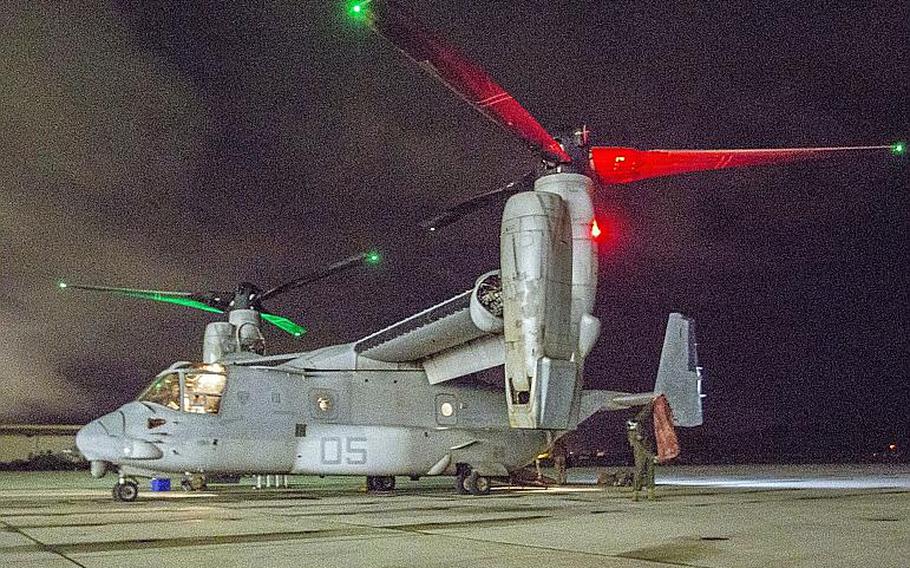 FORT SHAFTER, Hawaii — The Marine Corps continues to extend its reach in the Pacific with the recent relocation of an MV-22 Osprey squadron to Hawaii and a 6,100-mile trans-Pacific flight by eight of the tiltrotor aircraft.

VMM-268 completed a similar journey for the first time last year while flying only four Ospreys.

By tilting their rotors, Ospreys can take off, fly and land as helicopters, but they can also be flown at high speeds as fixed-wing aircraft.

“We were traveling at fixed-wing top rotor airspeeds,” said Lt. Col. Richard Alvarez, commander of VMM-268. He piloted one of the Ospreys from Darwin, where they had been deployed for training since April, along with about 1,600 Marines.

That was an average speed of about 288 mph.

The flight was done in three legs: Darwin to Guam, then to Wake Island, then to Hawaii. Each leg took five to eight hours, Alvarez said.

In two legs, the Ospreys flew in smaller divisions of four that are more maneuverable, particularly when aerial C-130 tankers are used for refueling, as was the case in this trans-Pacific flight, he said. In another leg, the eight aircraft flew as one division.

Each Osprey has the capacity to carry 25 Marines, but only the flight crews were aboard the eight aircraft, which had arrived in Darwin aboard a Navy ship.

Alvarez described the trans-Pacific flight as further confirmation that the Marine Corps has “the ability to self-deploy in MV-22s anywhere in the world we need to go.”

There are now more Ospreys deployable from Hawaii.

On Sept. 21, the Marines held a ceremony dedicating the relocation of Marine Medium Tiltrotor Squadron 363 to Marine Corps Base Hawaii, as well as the squadron’s new hangar built at Marine Corps Air Station Kaneohe Bay.

“The arrival of a second MV-22B Osprey squadron to our Hawaii-based Marine Aircraft Group significantly increases our combat capability and allows us to better respond to crises throughout the Indo-Pacific area of responsibility,” Col. Stephen Lightfoot, commander of Marine Aircraft Group 24, said in a statement.

The move to Hawaii brings the Osprey squadron about 2,500 miles closer to the Western Pacific.