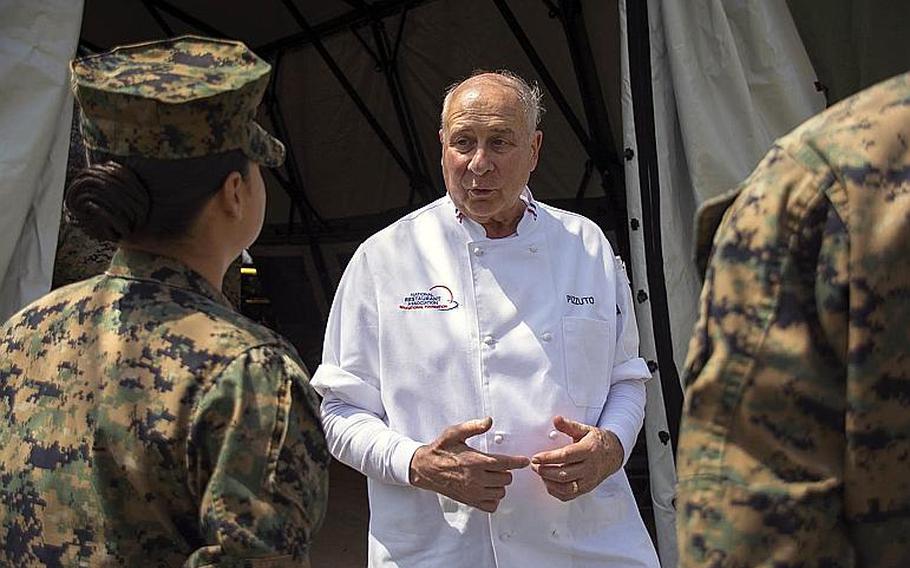 Buy Photo
Michael Pizzuto, of the National Restaurant Association and a judge in the W.P.T. Hilll award competition, speaks to Marines at Camp Kinser, Okinawa, Japan, on March 14, 2019. (Carlos Vazquez/ Stars and Stripes) 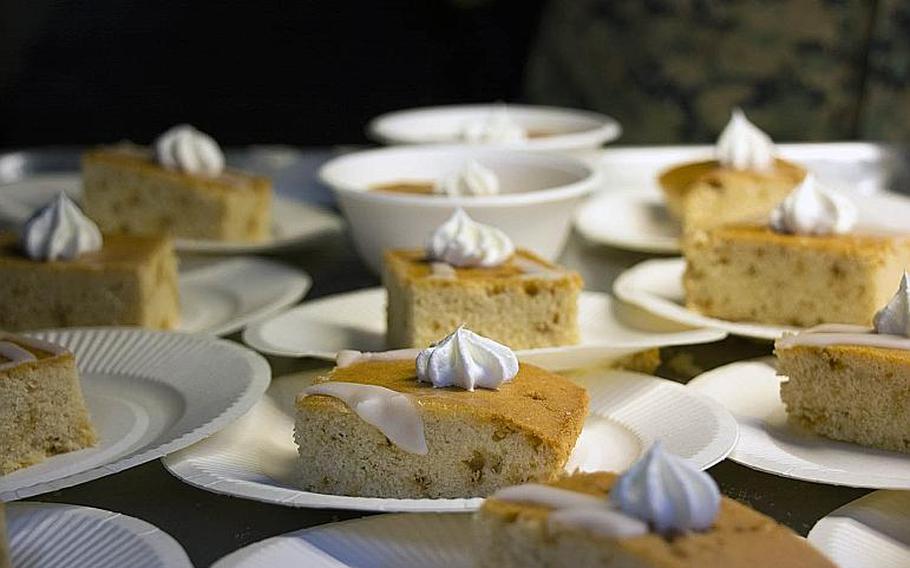 CAMP KINSER, Okinawa — On the strength of a favorite Okinawan dish, members of Combat Logistics Regiment 37 are representing the III Marine Expeditionary Force at a competition for the Marine Corps’ top culinary award.

The Maj. Gen. W.P.T. Hill Memorial Awards for Food Service Excellence were established in 1985 with the aim of improving food service operations and identifying the best expeditionary dining facility in the Marine Corps. The award winners — I MEF and II MEF cooks are also competing — are expected to be named in early April and will be able to attend a ceremony in Chicago in May.

Food specialists of the 37th Regiment presented a “build your own” meal of Okinawa taco rice to judges and patrons on Thursday. It’s an island lunchtime staple of ground beef or chicken, lettuce, cheese and tomatoes served on top of rice.

The competition involved more than a meal; the regiment also had to build a field mess tent fitted with a kitchen, serving line, seating area and physical security.

The team dedicated its expeditionary field kitchen, or EFK, to Pvt. Howard P. Perry, who in 1942 became the first African-American to enlist in the Marine Corps. Construction started on Feb. 28 and builders overcame strong winds and heavy rains to finish the job.

“It took about three weeks to set up the site,” the regimental mess chief, Gunnery Sgt. Julia Criquimatura, told Stars and Stripes on Thursday. “The EFK itself can feed over 800 Marines, twice a day.”

On competition day, a three-person panel – two senior food-service specialists from Headquarters Marine Corps and a civilian representative from the National Restaurant Association – judged the regiment’s presentation. Servicemembers from various commands were invited to experience the field kitchen and taste the menu items.

“I am very impressed with what I am learning about the Marines in particular with the standards they adhere to, how they evaluate their performance, how they hold everyone accountable and the teamwork where everybody is a mentor for one another, helping each other grow,” Michael Pizzuto, a judge from the National Restaurant Association, told Stars and Stripes.

Pizzuto, on his first trip to Okinawa, said being a part of the judging panel held a special meaning for him. The island was his father’s last duty station while serving in the Army during World War II.

This year’s competitors prepared the taco rice meal to highlight their connection with Okinawa, according to Col. Scott Johnson, commander of CLR 37.

“This year they brought it,” he said. “Not only the tactical setup, with the camo-netting and concertina wire, but also the internal setup with the best chow on the menu.”

The Marines put their own spin on the menu’s side items with names like “quarterdeck quesadillas,” “fire watch nachos” and “sea bag salad bar.”

Aside from judging the food quality and taste, the judges evaluated the entire process, from site layout, management and sanitation, to food preparation, maintenance, storage and financial accounting.

Pizzuto said the MEF that comes out victorious would most likely be close in final scores, but he said he was impressed by the quality and maturity of the Marines he evaluated, compared to the chefs he speaks to in civilian kitchens.

“The military travels on its stomach,” he said. “If they are not healthy and not well fed, they are not going to perform or get the mission done. But I don’t see that happening, especially with the kind of enhancements here.”

“I really hope we win,” said food-service specialist Lance Cpl. Carolina Campuzano. “This morning we gave our best, we put our love and everything into this meal and this whole set up.”

Criquimatura said the competition brought out the best in the regiment.

“The highlight of today was everybody’s mood; everybody was just really happy to be here, the cooks, the patrons, everything was amazing,” she said. “It was hard work. It was all worth it.”