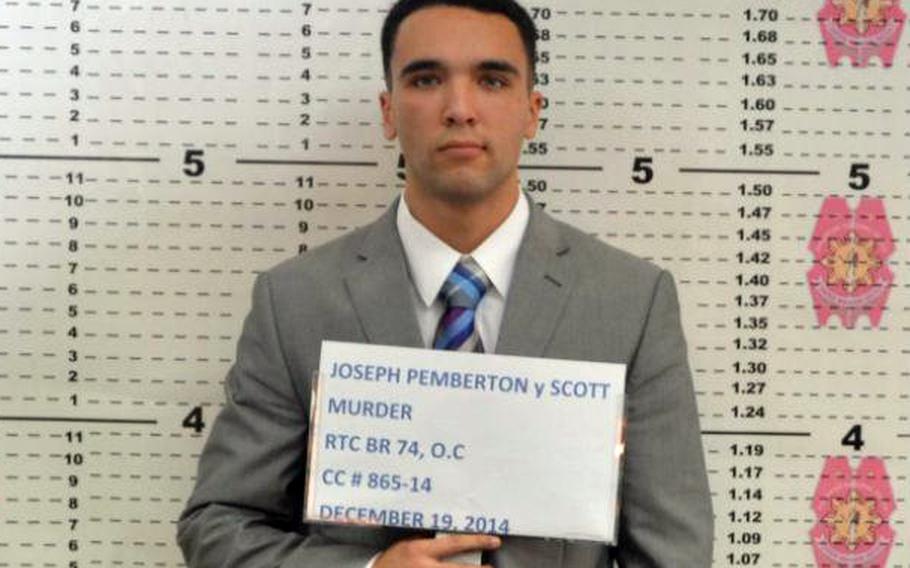 OLONGAPO CITY, Philippines — A Philippine court on Tuesday convicted a U.S. Marine of killing a transgender woman he picked up in a bar during shore leave last year and sentenced him to six to 12 years in prison — setting off a custody dispute whose outcome could affect U.S. efforts to rebuild military ties with the island nation at a time of concern over a resurgent China.

Pfc. Joseph Scott Pemberton of New Bedford, Mass., was found guilty of strangling and drowning Jeffrey “Jennifer” Laude in the toilet of a hotel room in Olongapo, the main city along Subic Bay, in October 2014. The court convicted Pemberton of the lesser charge of homicide rather than murder because the crime was not premeditated and he was impaired by alcohol. He was also ordered to pay nearly $100,000 in damages to the victim’s family.

But the Americans refused to hand him over, citing provisions of the agreement that allow U.S. authorities to hold servicemember-defendants “until completion of all judicial proceedings.” Under the U.S. interpretation, those proceedings aren’t complete until all appeals are exhausted.

Following the verdict, Pemberton huddled with several U.S. officials on the top floor of the courthouse in Olongapo City while a temporary deal was worked out. After the haggling dragged on until nearly 7 p.m., the judge ordered Pemberton returned to Camp Aguinaldo, a Philippine military base in Manila where he has been guarded by U.S. personnel during the trial.

She gave officials five days to reach an agreement on custody or she would send him to Bilibid.

Many Filipinos believe the United States has never treated the Philippines, a former American colony, as a truly independent country and equal partner. Those suspicions can boil over at any sign of what Filipinos consider special treatment for Americans.

When Marine Lance Cpl. Daniel Smith was convicted of rape in 2006 and sentenced to 40 years in prison, many Filipinos were outraged that he was detained at the U.S. Embassy rather than a Philippine prison.

In 2009 the Philippine appeals court overturned Smith’s rape conviction after the victim recanted, and he returned to the United States.

The fact that Pemberton was convicted, however, helped defuse public anger, despite concern that protests could erupt later if the custody dispute cannot be amicably resolved.

Laude’s mother, Julita, said she had hoped Pemberton would be convicted of murder rather than the lesser homicide charge.

“But the important thing is he will be jailed,” she told The Associated Press. “My son’s life is not wasted.”

The Laude family’s private attorney, Harry Roque, told the AP that “this is a bittersweet victory because it is not murder.”

“If what he did isn’t cruelty, I don’t know what is,” Roque said.

Pemberton met Laude on Oct. 11, 2014, in a disco in a red-light district of Olongapo while bar-hopping with other Marines following joint U.S.-Philippine military exercises. They checked into a nearby hotel, and Laude was later found dead in the bathroom. The cause of death was determined to be drowning; her head was in the toilet.

Pemberton, an anti-tank missile operator assigned to the 2nd Battalion, 9th Marine Regiment, 2nd Marine Division based at Camp Lejeune, N.C., testified that he had drunk a half-dozen beers and several shots of liquor on the night of the slaying. He said that when he got to the disco, he was approached by what he thought were two provocatively dressed women who offered sex.

Pemberton said that when he discovered Laude was a man, a fight ensued. Pemberton said he used a choke hold to subdue Laude but claimed she was still breathing when he left and that someone else must have killed her. A shipmate testified that after Pemberton returned to his vessel, he said, “I think I killed a he-she.”

The case has cast a pall over the renewal of military relations between the U.S. and the Philippines, providing fodder for those who object to any American presence. About 100 riot police cordoned off streets around the courthouse in Olongapo, about 80 miles from Manila, as about 200 protesters awaited the judge’s decision on where to house Pemberton. Some in the crowd waved placards with photos of Laude, while speakers told of other crimes committed by U.S. troops over the years.

The crowd had dispersed by the time the standoff was over.

While the slaying has sparked some protests, public support has been growing for a stronger U.S. military presence, particularly with China’s territorial claims in the South China Sea, the ongoing threat of terrorism and the need for international in coping with the typhoons, earthquakes and volcanic eruptions that regularly batter the country.

President Barack Obama recently signed an agreement with the Philippines to allow U.S. forces to pre-position disaster relief supplies and other materials in the country.

Nevertheless, the deal spawned its own backlash, with the Philippine Senate calling it a treaty that should require Senate ratification rather than a presidential signature alone. The national Supreme Court is considering the constitutionality of the agreement, with a decision expected this month.

Patricio Abinales, a Philippines expert at the University of Hawaii, says any fallout from the Pemberton case is likely to be short-lived.

“I think there will be the usual noise from the small left-wing groups, but in the light of what China is doing, and with Obama reiterating American commitment to Philippine security during last week’s APEC meeting, Pemberton’s case will be in the media for at most a week, then disappear to the inside pages,” Abinales said.