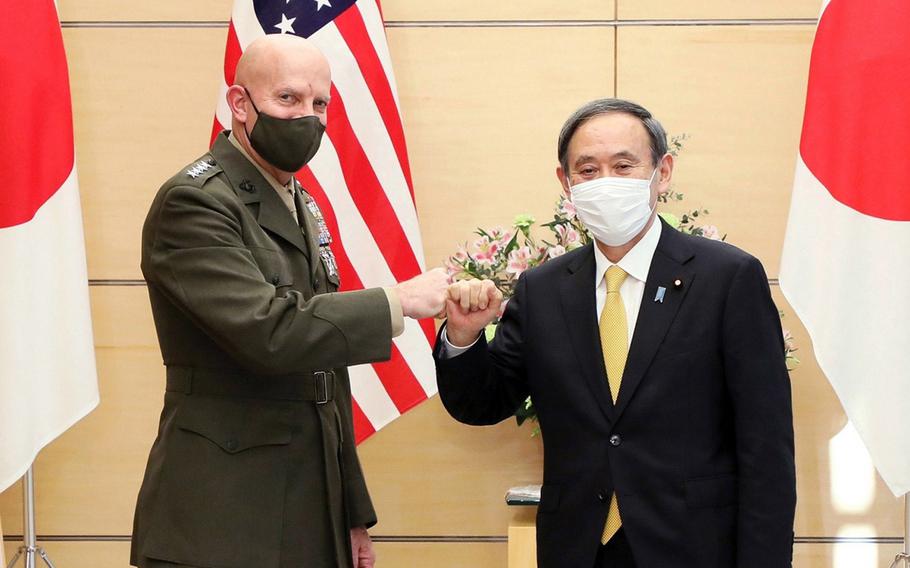 A brief meeting Wednesday between Prime Minister Yoshihide Suga and Gen. David Berger is another sign that the United States is rallying allies and friends in the region to counter an assertive China.

“I understand this severe security environment you are in, and that, I think, drives us to move ahead to change, to maintain the deterrence, and we do that together as one team,” Berger said in a video of the meeting posted online by Suga’s office.

Since 2012, Beijing has militarized dozens of islands and reefs in the East and South China seas, most of which it claims as territorial waters. The U.S. and Japan maintain that the seas are international waters.

Japan faces off against China over control of the Senkaku Islands, a small, uninhabited chain west of Okinawa. The islands sit near vital sea lanes, near fishing grounds and close to potential oil and natural gas reserves.

Japan administers the islands, but China and Taiwan also claim them. Chinese coast guard vessels have spent a record number of days near the islands this year, watched by their Japanese counterparts.

The U.S.-Japan alliance has “never been more important,” Berger said in the meeting. It’s “very important for me to listen to understand how you view … what the Marine Corps and the U.S. military can do as partners.”

Berger is the latest top U.S. commander to comment on the alliance with Japan. On Oct. 26, during the Keen Sword exercise, U.S. Forces Japan commander Lt. Gen. Kevin Schneider emphasized the two nations’ ability to deploy rapidly and defend the Senkakus.

U.S. Marines practiced island landings during Keen Sword with their Japanese counterparts in the Amphibious Rapid Deployment Brigade. The new brigade is patterned after the Corps.

Suga told Berger that the Japanese “highly appreciate the effort of the U.S. Marine Corps” to maintain a ready deterrence,” according to the video.

“We’d like to continue to deepen our coordination together with the United States by enhancing our response and deterrence capabilities of the bilateral alliance and also achieve the free and open Indo-Pacific,” Suga said.

Berger and Suga also discussed the importance of gaining Japanese citizens’ cooperation and understanding to maintain U.S. forces in Japan during the planned realignment of forces on Okinawa, according to a statement on the Japanese Foreign Ministry website.

The U.S. is building a new airfield near rural Camp Schwab on Okinawa to relocate Marine Corps Air Station Futenma from a crowded urban area farther south. The Marines also plan to relocate thousands of Marines from Okinawa to Guam.

Berger and Suga agreed that reducing the Marine Corps’ burden on Okinawa was important but emphasized that keeping the U.S.-Japan alliance strong is also vital, according to the Foreign Ministry statement.