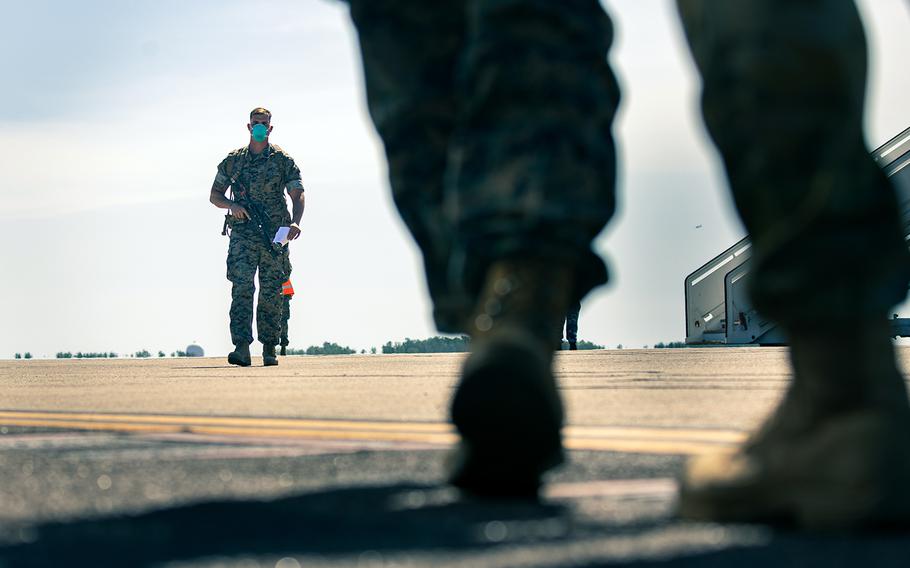 A U.S. Marine has tested positive for the coronavirus in Darwin, Australia, the service announced in a statement Friday.

The Marine was in a third wave of troops arriving Down Under as part of the annual rotational force, which includes only half as many Marines as originally planned for a summer training mission cut short by the coronavirus.

The Marine arrived in Darwin on Wednesday and received the test result two days later, the statement said.

Officials are waiting to confirm the Marine’s positive result along with results for other Marines in the most recent wave, the Marines said.

The Marine who tested positive followed Northern Territory and federal health guidelines and has been in mandatory quarantine since arrival, the statement said.

“The Marine is currently under strict isolation at Royal Darwin Hospital and the [Northern Territory] government remains informed and is providing support,” it said.

Those who had contact with the Marine has been quarantined and will receive additional testing, the statement said.

“Medical specialists will continue to monitor the health and safety of all Marines,” the Marines said.

Any Marine whose condition becomes serious will be taken to Royal Darwin Hospital for observation, testing and treatment, the statement said.

The rotation had been scheduled to begin in March but was delayed following an order that month from Defense Secretary Mark Esper barring nearly all official movement overseas for Defense Department personnel.

The modified rotation involves around 1,200 Marines training exclusively in the Northern Territory until September, Australian officials said in May.

Marines deploying to Darwin are screened and tested upon arrival before being quarantined for 14 days at specially prepared defense facilities. Each Marine is re-tested at the conclusion of the quarantine period, the Marines said in a statement in May.

However, in the southern state of Victoria, where residents have been locked down inside their homes, an overnight surge of 288 new cases was recorded overnight, Australia’s news.com.au website reported Friday.