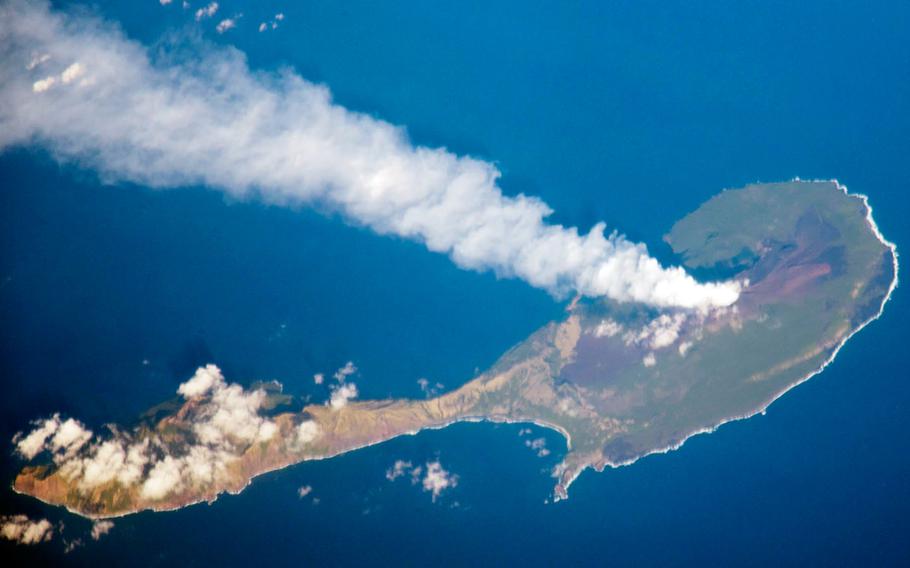 A plume rises from the volcano on the northern end of Pagan Island in this photo taken from the International Space Station on March 6, 2012. (National Aeronautics and Space Administration )

A plume rises from the volcano on the northern end of Pagan Island in this photo taken from the International Space Station on March 6, 2012. (National Aeronautics and Space Administration ) 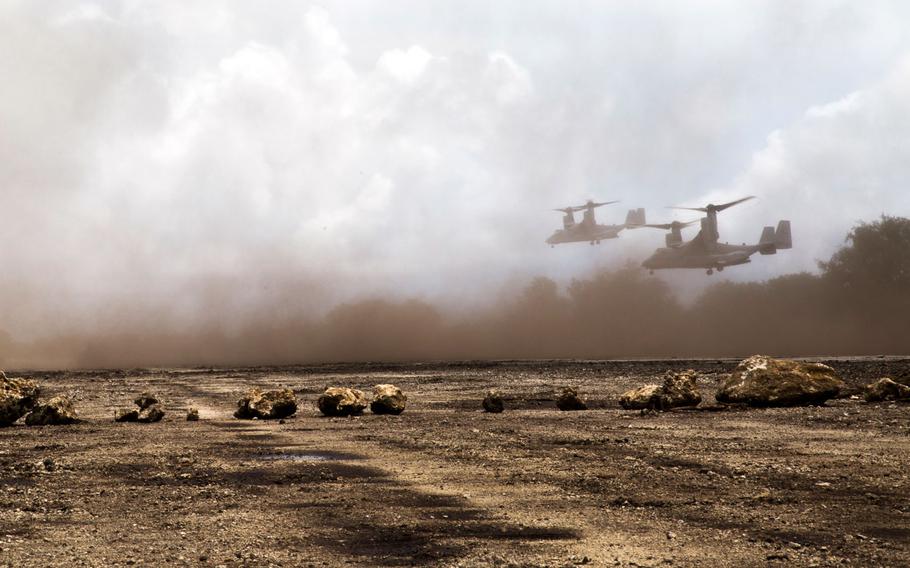 Two MV-22B Ospreys land on Echo Field in Tinian Island, in the Commonwealth of the Northern Mariana Islands, on Sept. 21, 2014, during the Valiant Shield exercise. (Alex Walters/U.S. Marine Corps) Marine infantrymen make their way to a compound held by Guam Army National Guard soldiers, who are acting as an opposing force, during the Valiant Shield exercise at Tinian Island's North Field in September 2014. (D.A. Walters/U.S. Marine Corps) 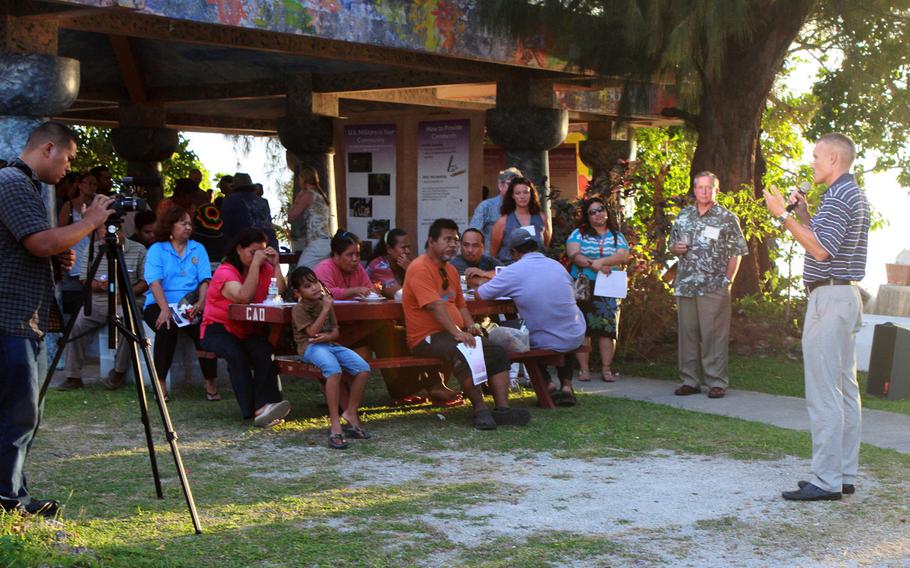 Activists and legislators in the Commonwealth of Northern Mariana Islands are mobilizing against a Navy plan to convert the entire island of Pagan into a live-fire training range.

The CNMI legislature is considering a joint resolution calling on the governor to oppose the military expansion on the 10-mile-long island. Meanwhile, officials on the island of Tinian told Guam’s Pacific Daily News that they plan to issue a statement Monday expressing concern over the proposed construction of a live-fire training range there, citing safety issues.

Earlier this month, the Pentagon released a long-awaited environmental impact statement for the proposal to obtain Pagan and to significantly upgrade training capabilities on Tinian.

The U.S. already leases two-thirds of Tinian but would have to negotiate for access to Pagan.

The EIS states that the U.S. “would seek to acquire a real estate interest for the entire island of Pagan.”

CNMI is an American territory, and most federal statutes concerning the environment are applicable there.

“The U.S. is rebalancing military forces in the Asia-Pacific region,” states the Pentagon’s website for the proposal. “In support of this, the U.S. military is proposing to increase joint military training capabilities by developing live-fire ranges and training areas on the islands of Tinian and Pagan.

Pagan is a barbell-shaped island, with a volcano at each end. The massive Mount Pagan to the north still smokes after a 1981 eruption that led to the evacuation of about 300 indigenous Chamorro people to Saipan 200 miles to the south. The CNMI government has not officially allowed them to return, but some have.

Opposition to the Pagan plan has simmered since it was broached in early 2013, with rallies against it held by the Sierra Club, Save Pagan Island, Roots Action and Care2Make a Difference. The proposal spawned an online community called Our Islands are Sacred and a petition on Change.org.

The issuance of the EIS then jolted CNMI lawmakers into action.

The speaker of CNMI’s House of Representatives was among the legislators who have now introduced a joint resolution urging Gov. Eloy Inos to oppose the use of Pagan in particular and to the expansion of the military presence in general.

The resolution contends that CNMI already contributes to national defense by leasing two-thirds of Tinian, property on Tanapag and the island of Farallon de Medinilla for training, maneuvers and live-fire bombing.

The Pagan plan “is basically a military war game plan that demands continuous use and occupation of the entire island of Pagan for warfare function areas not limited to amphibious warfare, anti-submarine warfare, mine warfare, strike warfare, air warfare, surface warfare, electronic warfare and Naval special warfare, among others,” the resolution states.

The U.S. Fish and Wildlife service contracted Michael G. Hadfield, a professor of biology at the University of Hawaii-Manoa, to lead an insect survey team to Pagan in 2010, information that would ultimately be used for the EIS. His was only one of many teams that surveyed the island.

“Speaking as a biologist, it’s got some really unique things about it,” Hadfield said of Pagan. “It’s not a wasteland, which I think some people envision because it’s got an active volcano. There’s a lot there that’s worth preserving — a couple of endangered bird species and snail species — which I specialize in and is about to hit the U.S. endangered species list.” The island is also home to a fruit bat on the endangered species list.

“Even the populations of species there are unique,” he said. “There’s no gene flow, so they’re not genetically related to populations on Sarigan or Saipan and so forth.”

Jerome Aldan, the mayor for CNMI’s Northern Islands, which includes Pagan, recently told a New Zealand radio program that the U.S. military’s description of the island as “uninhabited” was false.

“Our history goes back as far as the 1300s, and the military keeps coming out and stating in every press conference or document that the island is uninhabited, but that’s not really true,” Aldan said.

Hadfield said there were people living on the island when he visited.

“There are a lot of people who consider Pagan Island their homeland,” he said.

In wording that hints at the hornet’s nest the U.S. may have stirred with the proposal, the joint resolution asserts that “throughout the CNMI’s history, foreign powers and outside influences have made major decisions and have dictated the course of development” for the region and that the U.S. “once again stands poised to make some very important decisions with respect to the military utilization of the Northern Islands.”

Hadfield said he’s still digesting the contents of the almost 1,400-page EIS but thinks it gives the flora and fauna of Pagan short shrift.

“They pretty much discount that there are things that are valuable there,” he said. “They pay little attention to that huge bunch of surveys.

“I’ll admit at heart I am a conservation biologist, so part of my goal in life, I guess, is to try to preserve some of the disappearing natural resources of the world.”

The U.S. military is holding three public hearings on the EIS on Saipan and Tinian April 29 through May 1.