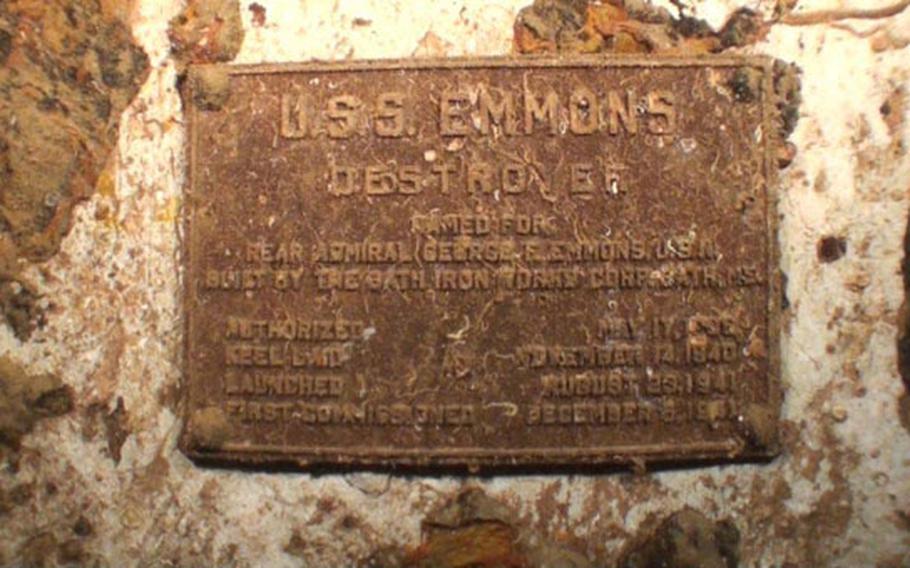 Buy Photo
This plaque showing the USS Emmons&#39; 1941 commission date was returned anonymously last month by mail after being looted from the destroyer shipwreck some time in 2010. (Kurt Reese/Special to Stars and Stripes)

Buy Photo
This plaque showing the USS Emmons&#39; 1941 commission date was returned anonymously last month by mail after being looted from the destroyer shipwreck some time in 2010. (Kurt Reese/Special to Stars and Stripes) 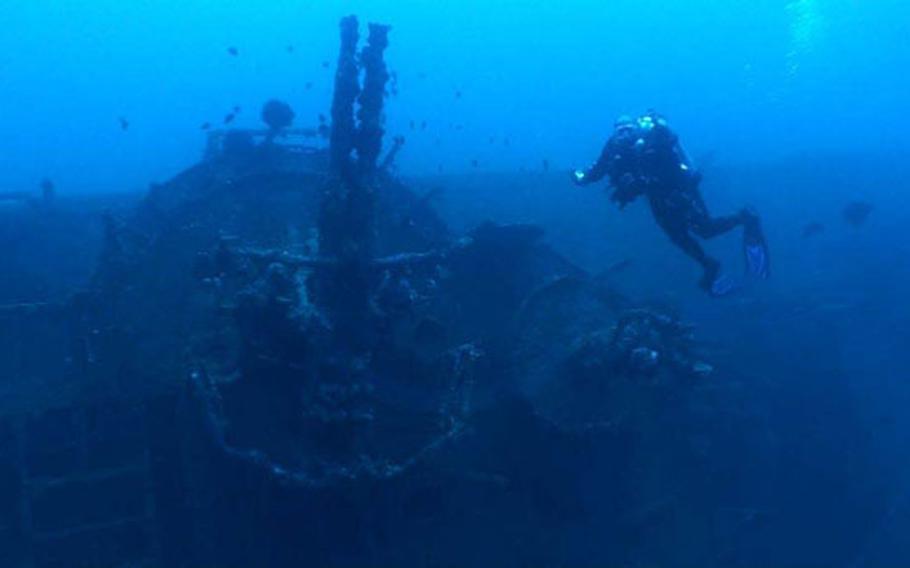 Buy Photo
A diver swims over the USS Emmons shipwreck off the coast of Okinawa in September 2009. (Kurt Reese/Special to Stars and Stripes)

CAMP FOSTER, Okinawa &mdash; A plaque looted from a World War II destroyer sunk off Okinawa has been returned, but the mystery surrounding its disappearance remains.

The builder&rsquo;s plaque on the USS Emmons was pried from inside the shipwreck sometime last year by scuba-diving thieves, triggering a Naval Criminal Investigative Service investigation in September and an appeal by Okinawa divers that the historic plaque be returned.

The trail went cold for months, and many believed the artifact would never be recovered.

Then on April 7 &mdash; one day after the anniversary of the ship&rsquo;s sinking in 1945 &mdash; a package arrived in the mail for Yukio Murata, chairman of the Okinawa Diving Safety Council.

It had been sent from a Naha post office and the only evidence of the sender was the name &ldquo;Jason&rdquo; written in Japanese characters, Murata told Stars and Stripes on Friday.

The missing Emmons plaque, a record of the laying of the destroyer&rsquo;s keel by the Bath Iron Works in 1940 that had rested in the darkness of 135 feet of ocean for over six decades, was inside the package.

Murata, whose efforts were key in recovering the stolen plaque, immediately turned the plaque over to NCIS.

Murata said when he learned of the theft, he offered his help to NCIS, American dive groups and a USS Emmons veteran group in the United States. He also contacted about 300 dive shops on the island to ask that the thief return the artifact.

&ldquo;I felt there were spirits who are still in that ship and it was important to return the plaque to them,&rdquo; said Murata, who was presented Friday with a $1,500 reward by the Okinawa Underwater Explorers dive group for his help finding the ship plaque.

About 50 sailors were killed or left missing in action and 65 were wounded when the USS Emmons was attacked and critically damaged by waves of kamikazes off the northern coast of Okinawa in April 1945, according to the USS Emmons Association veterans group. The U.S. Navy decided to scuttle the ship after the attack to keep it out of enemy hands.

It was rediscovered off the Okinawa coast in 2000 by the Japanese coast guard after local fishermen reported a persistent oil slick on the ocean.

Kurt Reese, a local diver who has visited the wreck often, was among a group of divers who first discovered the plaque was missing.

&ldquo;A buddy of mine wanted to see it, so he went in the ship and stuck his head out and motioned to me that it was gone,&rdquo; he said.

Reese said he and others did not think it would turn up and were concerned that even asking publicly for the plaque to be returned could cause the thief or thieves to destroy it.

But now that the plaque is back in U.S. hands, it is unlikely to disappear without a trace again.

Reese said two copies were made after the recovery &mdash; one will be given to the USS Emmons Association and the second may be returned to the Emmons wreck site.

The original builder&rsquo;s plaque is on its way to the U.S. Naval History and Heritage Command in Washington, D.C., where it will be preserved as a historical relic, said Clifton Everton III, supervisory special agent for NCIS in Okinawa.

Meanwhile, the identity of the thief who took the builder&rsquo;s plaque is still unknown.

Everton said the NCIS investigation is ongoing and the agency would not comment on the details of the case.

&ldquo;We are just pleased to have recovered the plaque, this historic artifact, and to have returned it to the U.S. Navy,&rdquo; he said.