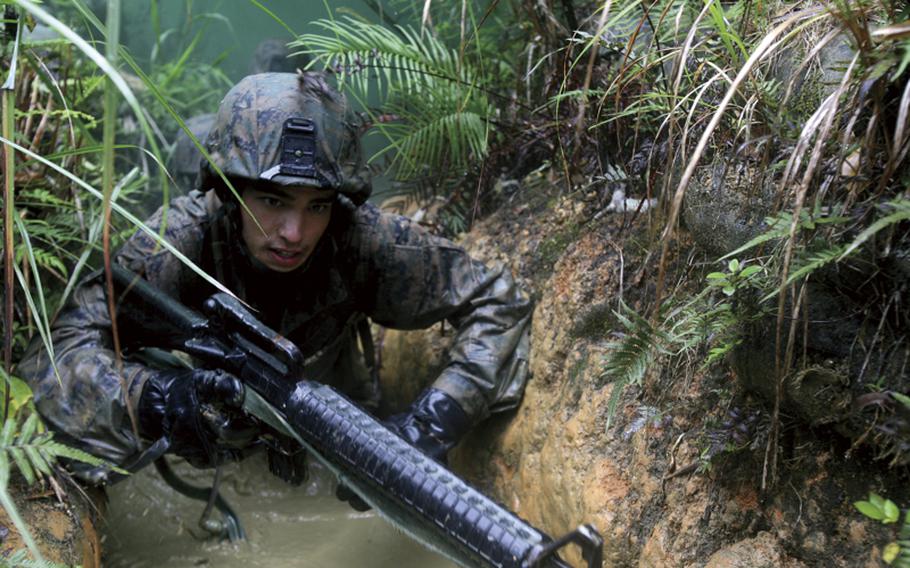 CAMP FOSTER, Okinawa &mdash; The United States faces serious strategic risks if it does not push ahead with plans to shift military forces in the Pacific, experts told House lawmakers Wednesday.

Failure to begin redeploying Marines from Okinawa to Guam and elsewhere in the region could violate the trust of allies and damage U.S. credibility in the Pacific, according to members of the Center for Strategic and International Studies.

The testimony before a House Armed Services subcommittee was part of the first congressional hearing on a Department of Defense-commissioned independent review of the realignment plans released by the Washington D.C. think tank last week. The long-awaited review largely validated the DOD effort to shift forces despite skepticism by powerful members of the Senate.

&ldquo;We have to live up to the commitments we have made [to relocate Marines] or we lose credibility with the very partners with whom we are trying to increase engagement,&rdquo; David Berteau, director of the center&rsquo;s international security program, told the House subcommittee on military readiness.

Michael Green, the center&rsquo;s senior adviser and Japan chair, said past delays on Guam have been closely watched in Japan and have already threatened to undermine support by the administration of Prime Minister Yoshihiko Noda, which has taken a political risk by contributing hundreds of millions of dollars to jumpstart the transfer of Marines from Okinawa.

In April, the U.S. renewed its agreement with Japan to redeploy 9,000 Okinawa-based Marines as part of a larger strategic shift to the region following the wars in Iraq and Afghanistan.

But some in Congress have questioned the need for the realignment and whether cost estimates of the shift were accurate. Funds for the move were frozen in this year&rsquo;s budget &mdash; with another freeze looming next year &mdash; until the U.S. military conducted a study to justify the measure.

Now that DOD&rsquo;s commissioned independent review has been released to Congress, it is up to the House and Senate whether to proceed with the plans and authorize new funding as part of the upcoming defense budget.

Berteau, who co-authored the review, warned that Congress should not look to the Pacific as a place to cut spending.

&ldquo;You wouldn&rsquo;t save much money even with pretty big force structure reductions in the Pacific but you&rsquo;d lose a heck of a lot of capability, and we think that is a pretty bad tradeoff,&rdquo; he said.

The think tank&rsquo;s assessment of the realignment plans received a nod from House members during the hearing Wednesday.

Subcommittee Chairman Randy Forbes, R-Va., said he agreed that the newest realignment proposal from the DOD to redeploy 9,000 Okinawa Marines to Guam and other areas that will likely include Hawaii and Australia is a good value for taxpayers.

&ldquo;Rarely in Washington do we encounter a proposal that expands capabilities and saves money, but I think we have encountered such a proposal in the latest agreement between the United States and the government of Japan,&rdquo; Forbes said.

Guam Rep. Madeleine Bordallo, who represents the territory as a non-voting member of the House, said Congress should &ldquo;get on with realignments in the Pacific or risk undermining our efforts in this critical region.&rdquo;

It remains unclear how much support the expert review might spark in the Senate. Last week, senators who spearheaded the spending freeze on the realignment zeroed in on sections of the review that criticized the military for not articulating the need for the shift in the Pacific, despite overall recommendations to keep on the same path.

&ldquo;We agree with CSIS&rsquo;s emphasis on the need for DOD to articulate the strategy behind its force-posture planning more clearly,&rdquo; according to a joint statement by senators Jim Webb, D-Va., Carl Levin, D-Mich., and John McCain, R-Ariz. &ldquo;Congress must also be confident that the DOD force planning and realignment proposals are realistic, workable and affordable.&rdquo;