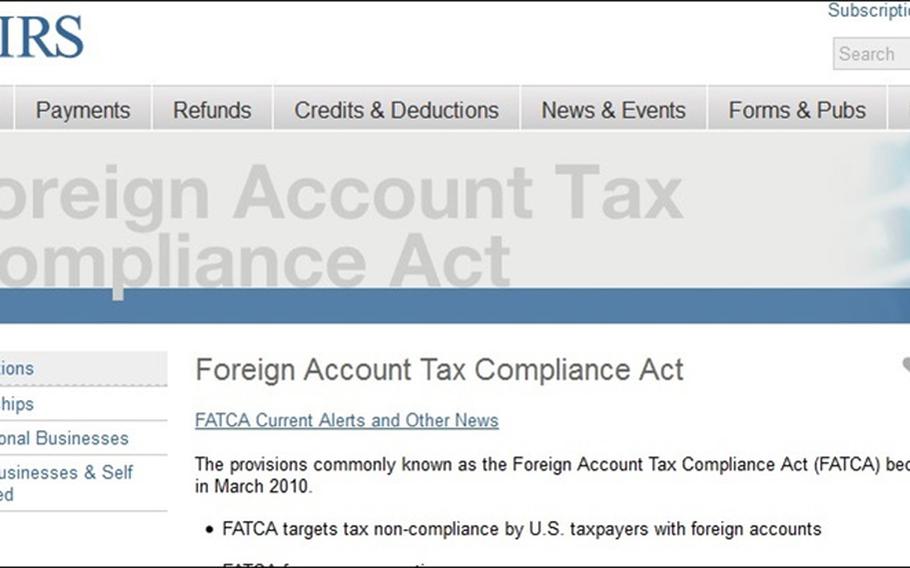 The Foreign Account Tax Compliance Act, passed by Congress in 2010, requires American citizens living abroad to report their nationality when opening a bank account in certain foreign countries. Enforcement mechanisms for the law will go into effect in South Korea on July 1. (Courtesy of IRS.gov)

SEOUL – American citizens now will be required to report their nationality when opening accounts at South Korean financial institutions, under a federal law intended to make sure U.S. residents living overseas don’t skip out on paying their taxes.

The Foreign Account Tax Compliance Act, also known as the FATCA, was passed by Congress in 2010 in an effort to prevent tax evasion. Enforcement mechanisms for the law will go into effect in South Korea on July 1.

“Each year, some wealthy individuals evade millions of dollars in taxes through the use of offshore financial accounts that are not reported to the IRS or other tax authorities,” the U.S. Treasury Department said in a press release earlier this year. “This international tax evasion is illegal, contributes to the federal debt, and creates inequity within the tax system.”

Most U.S. servicemembers and Defense Department workers use on-base banks and credit unions, which are run by U.S. financial institutions. However, the FATCA regulations would affect workers -- particularly those who are in the country long-term -- who open a Korean bank account or have spouses who open a Korean bank account, a step necessary for most expats who get jobs with Korean companies.

The NTS will exchange tax information with the U.S. Internal Revenue Service every September beginning in 2015. Financial institutions that don’t comply must pay a 30 percent withholding tax on some payments from American sources. Large accounts with balances greater than $50,000 that were opened before July 1 face reporting deadlines in 2015 and 2016, according to the FSC.

The FATCA, which also applies to green card holders, has been criticized as being an invasion of privacy that hurts law-abiding expats and not those who use overseas accounts to avoid paying taxes.

According to media reports, some foreign financial institutions have denied mortgages and other services to U.S. citizens because of the extra paperwork involved, and an increasing number of Americans have renounced their U.S. citizenship because of the hassles stemming from the FATCA.

The U.S. has signed or is planning FATCA enforcement agreements with dozens of countries, including Germany, Japan and Italy.