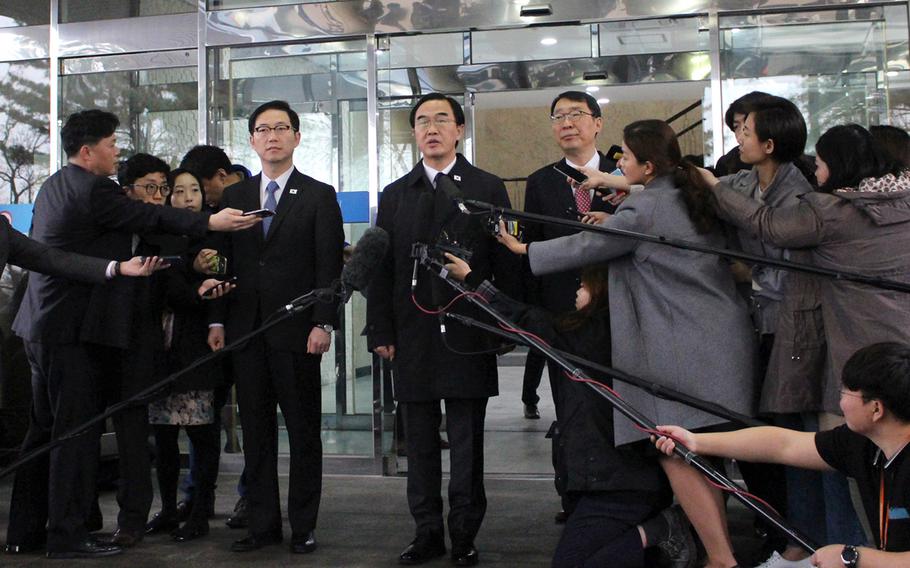 Unification Minister Cho Myoung-gyon, center, speaks to reporters in Seoul before leaving for talks with North Korea to prepare for a summit between the leaders of the two rival nations. (Courtesy of the Joint Press Corp)

Unification Minister Cho Myoung-gyon, center, speaks to reporters in Seoul before leaving for talks with North Korea to prepare for a summit between the leaders of the two rival nations. (Courtesy of the Joint Press Corp) Senior North and South Korean officials hold high-level talks on the North Korean side of the truce village of Panmunjom in the tense border area, Thursday, March 29, 2018. (Courtesy of the Joint Press Corp)

SEOUL, South Korea — North and South Korea will hold their first summit in more than a decade on April 27, the two sides said Thursday.

The date for the historic meeting between President Moon Jae-in and North Korean leader Kim Jong Un was set during a high-level meeting on the northern side of the truce village of Panmunjom in the tense border area.

It came days after North Korea’s reclusive leader made a surprise train trip to China to reaffirm ties and declare that he’s committed to denuclearization.

President Donald Trump expressed optimism, saying his Chinese counterpart told him the meeting with Kim “went very well” and the North Korean leader “looks forward to his meeting with me.”

However, he insisted that he’ll maintain punishing sanctions and other moves aimed at pressuring the North Korean regime to abandon its nuclear program.

“For years and through many administrations, everyone said that peace and the denuclearization of the Korean Peninsula was not even a possibility,” Trump said Wednesday in a tweet. “Now there is a good chance that Kim Jong Un will do what is right for his people and for humanity.”

The United States and South Korean also plan to begin war games on Sunday after a delay to ease tensions for the Olympics and Paralympics.

The annual military exercises usually infuriate the North, which considers them a rehearsal for an invasion. But Kim reportedly said he understood they would go on as planned this year.

The delegations that met Thursday were led by South Korean Unification Minister Cho Myoung-gyon and North Korea’s Ri Son Gwon, chairman of a state agency that deals with inter-Korean affairs.

They issued a joint statement announcing the date and saying another meeting would be held on April 4 to discuss protocol and other details.

The two leaders agreed to meet following a series of breakthroughs that began with the North’s participation in the Winter Olympics, which were held in the South.

That has eased tensions after months of North Korean nuclear and missile tests and saber rattling by both sides that prompted fears of a new war on the divided peninsula.

“For the past 80 days, there have been many historic events that we had not seen before,” Ri said in remarks before the closed-door meeting began. "I believe those historic records were made because we united our minds, efforts and power."

Cho thanked Ri for what he called a warm welcome and said the two sides “should consult honestly today to ensure a successful summit” according to the will of the top leaders of the North and South.

Trump agreed to hold what would be the first-ever U.S.-North Korean summit by May after South Korean officials relayed a message that Kim had invited him to meet as soon as possible and was willing to suspend nuclear and missile tests.

Kim was quoted as confirming that during his meetings with Chinese President Xi Jinping earlier this week, which took place under a cloud of secrecy.

But he also signaled that Pyongyang will be demanding a price for its recent goodwill.

"The issue of denuclearization of the Korean Peninsula can be resolved, if South Korea and the United States respond to our efforts with goodwill, create an atmosphere of peace and stability while taking progressive and synchronous measures for the realization of peace," Kim was quoted as saying by China’s state news agency Xinhua.There was no elaboration, but the North Koreans have in the past used talks to try to gain U.S. concessions and humanitarian assistance.

Many North Korea watchers have cautioned that Kim is unlikely to give up his nuclear weapons and may be trying to create divisions among the United States, South Korea and China to disrupt the increasing effects of economic sanctions and diplomatic pressure against it.

"We hope a clear foundation for permanent denuclearization of the Korean Peninsula and the establishment of a peace regime will emerge in the upcoming South-North Korea summit and the North-U.S. summit," he said.

The Moon-Kim meeting will be only the third summit between the rival Koreas since the 1950-53 Korean War, which ended in an armistice instead of a peace treaty. The leaders are expected to have discussions about Kim’s summit with Trump high on the agenda.