Koreas hold border talks on next steps for military pact 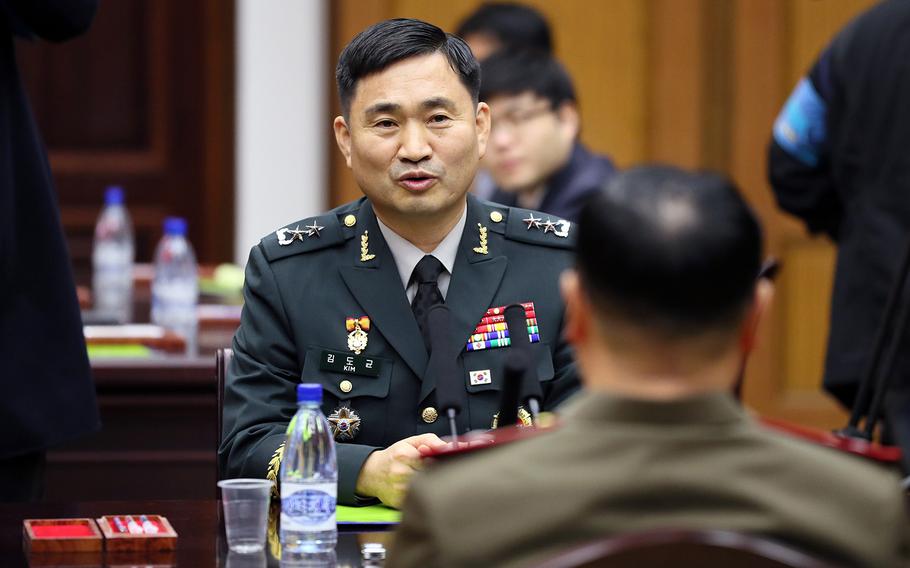 SEOUL, South Korea — North and South Korea agreed Friday to remove 11 border guard posts each by next month as they pressed forward with efforts to ease hostilities and transform one of the world’s most heavily fortified frontiers into a “peace zone.”

The timeline was set during talks led by generals from each side in the truce village of Panmunjom.

They occurred a day after the two Koreas and the U.S.-led United Nations Command completed the removal of firearms and troops from the border area.

“I feel happy to see with my own eyes that steps for the disarmament of the Joint Security Area have become reality,” South Korea’s lead delegate Maj. Gen. Kim Do-gyun said in his opening remarks.

The measures are in line with a wide-ranging inter-Korean military agreement reached last month.

The rival neighbors also agreed Friday on a joint military committee to enforce the agreement, according to a statement issued after the meeting.

Another team will conduct research on allowing safe passage for civilian ships through the previously restricted Han River estuary near the western border, it said.

The 22 guard posts – including staff and equipment – will be removed on a trial basis by the end of November, with mutual verification to be completed by the end of the year, according to the statement.

Working-level consultations will then be held to consider removing the rest of the guard posts along the Demilitarized Zone pending an evaluation of the effort, it said.

Both generals were optimistic after the meeting.

“North and South Korean military authorities proved once again that they can do well to live up to the expectations of our people if we show respect and understanding with each other and honor our leaders’ wishes,” North Korean Lt. Gen. An Ik San said.

The two Koreas, which remain technically at war after their 1950-53 war ended with an armistice instead of a peace treaty, reached the military agreement during a summit last month.

On Thursday, they finished disarming Panmunjom, which is the only point where soldiers from the two sides stand face to face in the DMZ, a 2.5-mile wide, 155-mile long buffer zone lined with barbed wire and dotted with land mines.

Critics have expressed concern that the South is pushing forward with improving inter-Korean relations instead of waiting for the North to take more concrete measures to give up its nuclear weapons.

Trump and Kim agreed to work toward the “total denuclearization of the Korean Peninsula” during their June 12 summit in Singapore. But the two sides have been unable to agree on the details.

The North Korean leader also met with South Korean President Moon Jae-in for a third time last month at which time he promised to visit Seoul “in the near future.”

Foreign Minister Kang Kyung-wha said Friday that South Korea is pushing for the visit to take place by the end of the year, according to the Yonhap News Agency.

The U.S. diplomatic offensive also continued as the State Department dispatched its special envoy for North Korea Stephen Biegun to the peninsula.

The envoy will meet with South Korean officials in Seoul on Monday and Tuesday to discuss “efforts to achieve the final, fully verified denuclearization of North Korea as committed to by Chairman Kim in Singapore,” the State Department said in a statement.