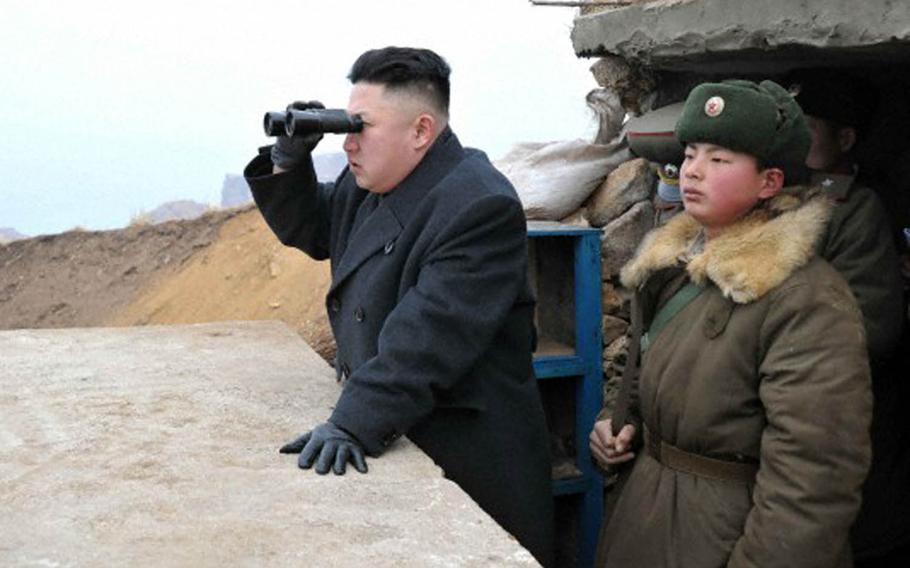 North Korean leader Kim Jong Un inspects an army unit in 2013. Kim wrapped up a week of provocative rhetoric Friday, March 11, 2016, by ordering more nuclear tests and threatening an immediate nuclear attack if ongoing U.S.-South Korean military exercises hurt “even a single tree or a blade of grass” in his country. (Courtesy of KCNA)

North Korean leader Kim Jong Un wrapped up a week of provocative rhetoric Friday by ordering more nuclear tests and threatening an immediate nuclear attack if ongoing U.S.-South Korean military exercises hurt “even a single tree or a blade of grass” in his country.

The directive to step up the nuclear program flies in the face of recent U.N. Security Council sanctions that were passed in response to the North’s fourth underground test Jan. 6 and subsequent rocket launch, and to express anger over the largest-ever spring military exercises the North sees as an invasion rehearsal.

Kim gave orders for “more nuclear explosion tests to estimate the destructive power of the newly produced nuclear warheads and other tests to bolster up the nuclear attack capability” that include striking “at the enemies from anywhere on the ground, in the air, at sea and underwater,” the North’s official Korean Central News Agency quoted him as saying.

Kim referred to the exercises, which began Monday, as “saber-rattling,” reflecting South Korean media reports that they include practice for destroying the North’s nuclear facilities and eliminating its leadership.

But Kim’s been doing more than his fair share of saber-rattling, too.

Pyongyang has threatened to turn South Korea, the U.S. mainland and American bases in the Pacific into a “sea of fire and ashes,” claimed to have produced a miniaturized nuclear bomb that could fit in a missile warhead and fired off rockets into the sea.

Sounding pessimistic that Kim will back down from the current crisis, Japan called further development of the North’s nuclear program unacceptable and said it would coordinate with the international community to send a strong message to Pyongyang.

“When taken into account of the present circumstances surrounding the Korean Peninsula, it is undeniable that North Korea might take further provocative actions,” Defense Minister Gen Nakatani told a news conference.

Kim’s statements also are believed to be directed at his own people to rally support, given his reported difficulties in consolidating power more than four years after taking over following the death of his father, Kim Jong Il. The ruling Workers’ Party also is preparing to hold its first congress in three decades decades in May.

Testuo Kotani, senior research fellow at the Japan Institute of International Affairs, suggested that North Korean provocations will continue until the congress and could include a nuclear test, a rocket launch or even a deadly but limited attack, such as when the North sank a South Korean naval vessel.

“This assembly is very important venue for Kim Jong Un to increase his own authority,” Kotani told the Foreign Correspondents’ Club of Japan. “So, I assume until this assembly is done, North Korea will gradually escalate the situation.”

“From North Korea’s standpoint, the whole world is making a concerted effort to attack them,” Shikata said. “Now even China has endorsed U.N. sanctions. In the South, a joint military exercise with a scenario that targets North Korea is underway. Domestically, Kim Jong Un has yet to establish his leadership.

“There is nothing else he can do now other than shooting missiles and conducting nuclear tests. It is like their hands are all tied,” he said.

But Shikata warned that being “a cornered rat” raises the possibility of a miscalculation setting off a major incident.

China had resisted tougher U.N. sanctions, worried that the impoverished North could collapse under too much pressure, sparking a flood of refugees and questions over what would rise in the place of the nuclear-armed regime.

No one can be sure what’s going on inside the reclusive country, but Kim’s string of high-profile purges of top officials seems to indicate paranoia about discontent and even a possible coup attempt, especially with the U.N. sanctions clearly aimed at tightening the noose on the North’s economy.

Victor Cha, former director for Asian affairs on the National Security Council under President George W. Bush, said the country could be fragile.

“North Korea, I think, quite frankly is one pandemic away from collapse, because they do not have the health system to deal with it,” Cha told Voice of America, pointing out how the country virtually shuts its doors whenever a major international disease outbreak occurs.

But he said that no matter what the penalties or incentives, Pyongyang is unlikely to give up its nuclear program, seeing it as insurance for the regime’s survival.

Stars and Stripes staffer Chiyomi Sumida and Hana Kusumoto contributed to this report.