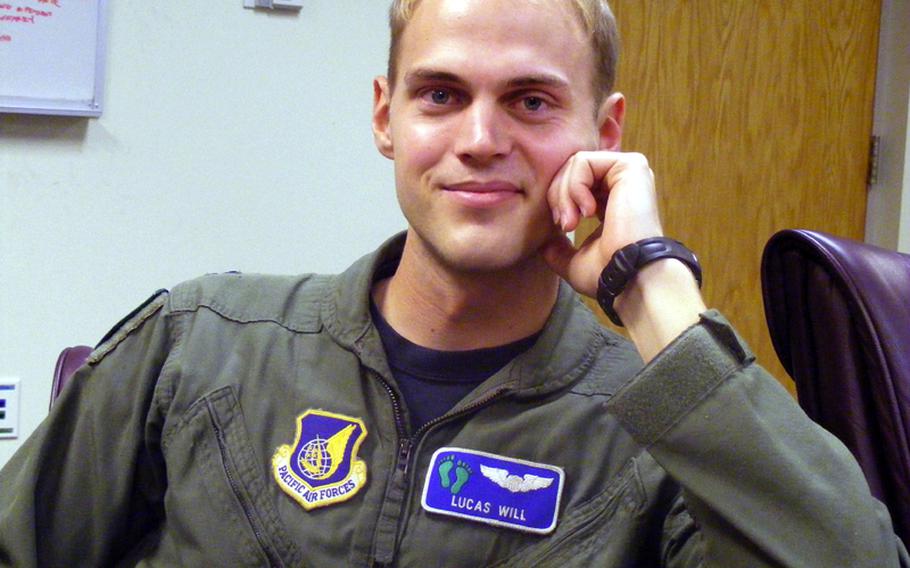 Capt. Lucas Will is one of the four members of the 33rd Rescue Squadron honored on the Mackay Trophy this year for actions during a medevac flight in Afghanistan in July 2009. He was the co-pilot of an HH-60G Pavehawk in that intense rescue mission under fire. (David Allen/Stars and Stripes)

Capt. Lucas Will is one of the four members of the 33rd Rescue Squadron honored on the Mackay Trophy this year for actions during a medevac flight in Afghanistan in July 2009. He was the co-pilot of an HH-60G Pavehawk in that intense rescue mission under fire. (David Allen/Stars and Stripes) 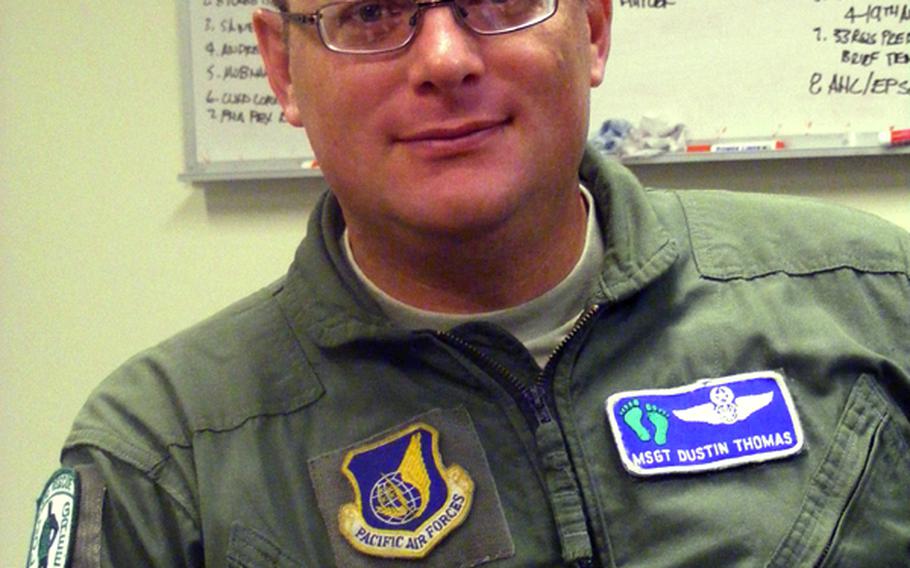 Master Sgt. Dustin Thomas is one of four members of the 33rd Rescue Squadron honored this year on the Mackay Trophy for actions during a medevac flight in Afghanistan in July 2009. (David Allen/Stars and Stripes)

KADENA AIR BASE, Okinawa &mdash; This year&rsquo;s recipient of the Mackay Trophy, awarded for the U.S. Air Force&rsquo;s &ldquo;most meritorious flight of the year,&rdquo; is a four-man helicopter crew assigned to the 33rd Rescue Squadron at Kadena.

The award was presented for a life-saving mission when the crew was flying with the 129th Expeditionary Rescue Squadron out of Kandahar, Afghanistan,

The flight took place July 29, 2009, when the Pedro 16, an HH-60G helicopter, launched on a medevac mission after an Army convoy was hit by an roadside bomb. Three soldiers were injured, and the convoy was being attacked by small arms fire and rocket propelled grenades from Taliban forces in nearby hills.

As Pedro 16 directed fire from two Army OH-58 attack helicopters, another Air Force helicopter, Pedro 15, landed under heavy fire. Its crew rescued the injured soldiers, but the pilot and co-pilot were wounded.

To make the situation more perilous, Pedro 15 was struck again when it took to the air. The enemy rounds damaged its hydraulics and fuel lines, forcing the pilots and crew to land about a mile away. Still under heavy fire, they abandoned the helicopter and took cover.

&ldquo;The mission was pretty intense,&rdquo; said Capt. Lucas Will, the co-pilot of the Pedro 16. Then a first lieutenant on his first deployment to Afghanistan. His aircraft switched from directing fire and executing low-altitude gun runs, to rescuing the men on the ground.

The Pedro 16 crew attacked the insurgents on a ridge line, confirming two kills before both mini-guns jammed, and the gunners switched to their M4 carbines.

&ldquo;I wasn&rsquo;t about to give up,&rdquo; said Master Sgt. Dustin Thomas, who was a gunner on the Pedro 16.

Then came the intense part, Will recounted. His pilot, Capt. Robert Rosebrough, landed to pick up the wounded convoy soldiers and the Pedro 15 pilots, who had suffered minor wounds. Rosebrough also directed the smaller Army Kiowas to land and take one Pedro 15 crewmember and two pararescue airmen on their landing skids after the wounded soldiers and airmen were loaded onto Pedro 16.

&ldquo;We put ourselves down in between the downed Pedro and the hills where the Taliban was being reinforced and firing our way,&rdquo; Will said during an interview at Kadena.

&ldquo;But then we had to return when we realized two [pararescue jumpers] and the flight engineer from the other Pedro, who were supposed to get on one of the Army helos, were still on the ground,&rdquo; Will said.

&ldquo;When we got back, we found out just how hot everything was,&rdquo; Thomas recalled. &ldquo;The Pedro 15 pilot took off his body armor and saw a bullet had dug a furrow in it, and then he pulled the bullet out of his pocket.&rdquo;

All four names of the crew &mdash; Will, Thomas, Rosebrough and Staff Sgt. Tim Philpott, a flight engineer and gunner &mdash; will be inscribed on the Mackay Trophy. Thomas and Will are the only two of the four still based at Kadena. Rosebrough is on another deployment to Afghanistan and Philpott is assigned to Kirtland Air Force Base, N.M.

The recipients of the Mackay Trophy are determined by the Air Force and presented by the National Aeronautic Association. After recipients&rsquo; names are engraved on the silver cup, it&rsquo;s displayed at the National Air and Space Museum in Washington, D.C.

The award will be presented Nov. 8 at a banquet in Arlington, Va.