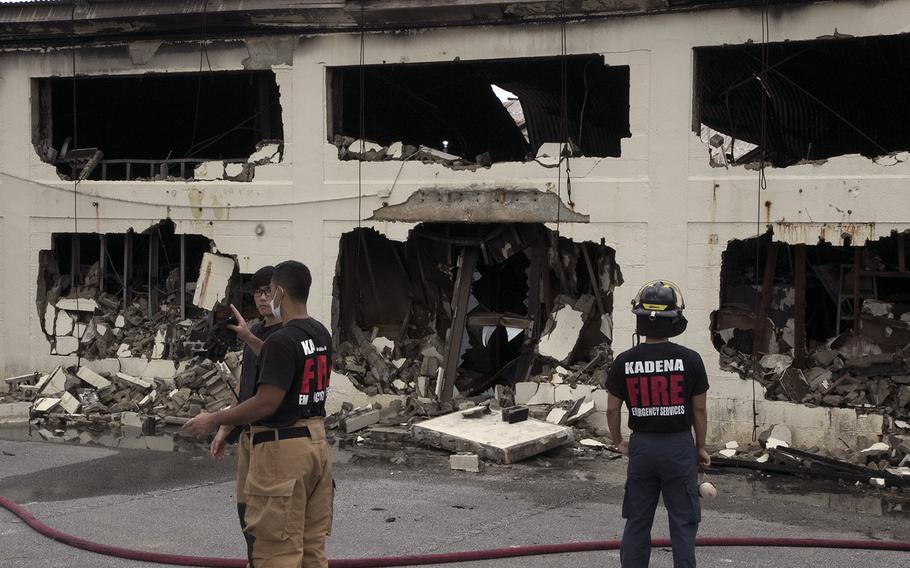 Firefighters survey damage at Kadena Air Base, Okinawa, Tuesday, June 23, 2020, the day after a blaze engulfed a hazardous materials building and released chlorine gas into the air. (Matt Burke/Stars and Stripes)

CAMP FOSTER, Okinawa — Approximately 100 people were “affected by smoke and/or chlorine gas” released by a fire Monday at a Kadena Air Base hazardous materials warehouse on Okinawa, according to updated figures released Wednesday evening by the 18th Wing.

The base began its cleanup Wednesday, which includes a “thorough” investigation of the cause of Monday’s blaze as well as health and environmental monitoring, the wing said in a statement Wednesday. The fire destroyed the 18th Logistics Readiness Squadron’s Hazardous Materials Pharmacy.

Four Japanese government officials from the Okinawa Defense Bureau, which represents Japan’s Ministry of Defense on the island, visited the site on Tuesday to see the recovery efforts and speak to the wing’s lead civil engineer about the blaze.

“At this time, the cause of the fire is still under investigation,” the statement said. “Emergency responders have been on the scene to ensure there are no safety risks to the base or local community and remain involved in recovery operations.”

The fire began at around 8:40 a.m. Monday at the warehouse south of Kadena’s airfield in the central part of the base, the wing said in statements earlier this week.

Thick plumes of smoke smothered areas near the fire and closed off roads as firefighters from 18th Civil Engineer Squadron Fire and Emergency Services worked to get it under control. The base evacuated an area 500 feet upwind and 2,000 feet downwind of the site.

No mutual aid was called, Wednesday’s statement said. The roof collapsed while firefighters battled the blaze.

Firefighters poured 600,000 gallons of water on the fire, a wing public affairs official told Stars and Stripes by phone Wednesday.

The water interacted with calcium hypochlorite stored in the warehouse and released the gas, according to the statement.

Calcium hypochlorite is commonly used in commercial bleaches, cleaning solutions and disinfectants for drinking water and wastewater purification systems and swimming pools, according to the National Institutes for Health.

Other unnamed hazardous materials were also on site.

“With the heavy rain on Monday and large amount of water used to extinguish the fire, run-off may have included residual hazardous materials that would have entered the storm drains,” the statement said. “The base’s civil engineer team monitored the storm water outfalls and did not note anything unusual in the run-off.”

Base civil engineers also monitored the sewage system but the runoff did not enter the system, it added.

The gas traveled no farther than 1,000 feet from the building, the statement said, citing the Bioenvironmental Engineering Flight on base.

At just after 2 p.m., the Kadena Facebook page announced the fire had been contained but that chlorine gas “particles” had been “released.”

Meanwhile, the 18th Medical Group canceled routine care at its facilities and encouraged anyone experiencing breathing or vision problems to seek treatment.

The wing announced Monday night that approximately 45 people had been “affected by smoke and/or chlorine gas.” Most suffered “mild symptoms” involving the airway or eye irritation and were treated and returned to duty.

That figure was revised to “approximately 100 individuals” Wednesday evening, according to the wing’s most recent statement. No Japanese were harmed by the gas, a defense bureau spokesman told Stars and Stripes on Tuesday.

Two firefighters were treated for heat-related injuries and were released, Wednesday’s statement said. Damages to the warehouse, which was a total loss, have not yet been assessed.

“This gas will not affect the local residents around the base,” the defense bureau spokesman said Wednesday. “Also, 18th Wing confirmed that there are no abnormal findings in the water in the sewer pipes on base.”