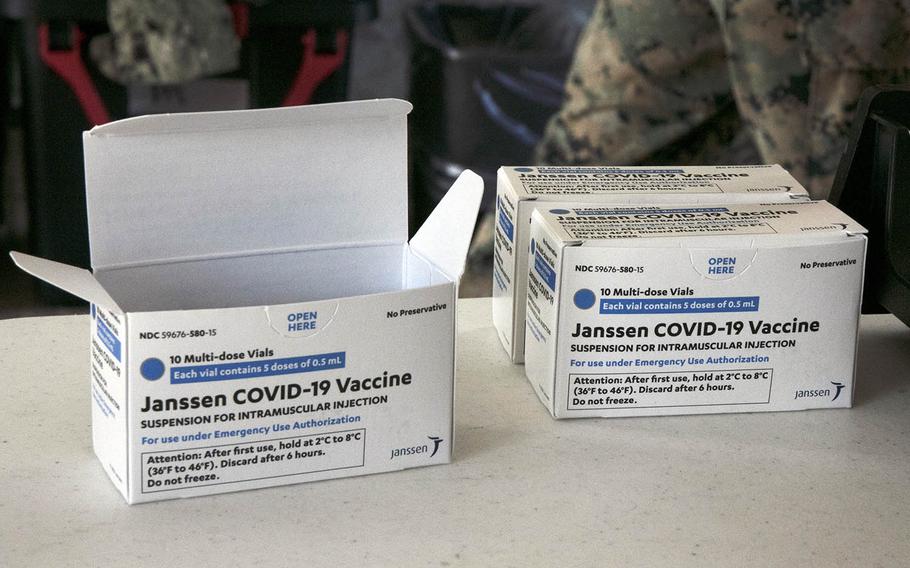 TOKYO – U.S. military bases in Japan and South Korea that scheduled vaccination clinics with the Johnson & Johnson one-shot vaccine either canceled or rearranged their calendars after the government halted the shot’s distribution.

The Defense Department ordered a temporary stop to inoculations with the Johnson & Johnson, or Janssen, vaccine following six cases, one fatal, in the United States of a type of blood clot deemed “rare and severe” by public health authorities.

At Misawa Air Base, 35th Fighter Wing commander Col. Jesse Friedel announced last week the first opportunity for people in the so-called tier two that includes the general population to get vaccinated. The base had received 1,900 doses of Johnson & Johnson, he said.

A good response followed Friedel’s announcement and expectations ran high among those waiting their turn for the shot, base spokesman Maj. Cody Chiles said Wednesday.

“A lot were hopeful, and excited for that opportunity,” he said.

Instead, the base pulled the plug on the event scheduled Friday at the officer’s club.

The overall pause may last only a few days, said Dr. Janet Woodcock, the acting FDA commissioner, during a virtual news conference Tuesday in Washington, D.C. A committee of the Centers for Disease Control and Prevention meets Wednesday to review the six cases, the CDC and FDA said in a joint news release.

No reports of blood clots have followed more than 180 million doses of the two other vaccines approved for emergency use by the FDA, the Moderna and Pfizer-BioNTech two-shot vaccines.

Woodcock said the Johnson & Johnson pause was recommended out of an abundance of caution, and that evidence shows the risk from vaccinations is minimal compared to the risk posed by the coronavirus.

“The risks of the pandemic are significant, and the government is really looking into any safety problems so they can be managed properly with this vaccine and all vaccines,” she said.

The U.S. military overseas administers the Moderna and Johnson & Johnson vaccines. Moderna is still available at U.S. bases in the Western Pacific, though the Johnson & Johnson pause has affected the overall distribution schedule in some places.

U.S. Forces Korea, which started vaccinating its general population April 8 with the one-shot Johnson & Johnson, announced Tuesday it would halt that distribution. USFK commander Army Gen. Robert Abrams on March 26 said the command had expected 11,900 doses of the one-shot vaccine by March 31.

Osan Air Base, south of Seoul, relied solely on the Johnson & Johnson vaccine and paused its vaccine distribution, according to a base Facebook post Wednesday.

Installations in Japan, where the Moderna vaccine is more prevalent, were more fortunate. With some exceptions, including Misawa, vaccine clinics were still on schedule.

Yokota Air Base in western Tokyo halted a plan to begin inoculating its remaining population this week because of the Johnson & Johnson pause. Vaccine lines scheduled Thursday and Friday were canceled until further notice.

“We are working out changes to the vaccine schedule to ensure that all eligible individuals who opt-in can be vaccinated, and we will provide more information when we receive it,” the base said in a Facebook post Wednesday.

Meanwhile, new cases of COVID-19, the coronavirus respiratory disease, continued to mount in Osaka prefecture, hard hit by a spring surge of the virus. The prefecture on Wednesday reported 1,130 newly infected people, its pandemic high and surpassing the previous record set Tuesday, according to public broadcaster NHK.

U.S. military bases in Japan reported seven new coronavirus patients, all on Okinawa, on Wednesday. The Marines reported that two people tested positive for COVID-19 at Marine Corps Air Station Futenma and one each at Camps Hansen and Courtney.

Kadena Air Base reported one person contracted the virus after close contact with another infected individual.

U.S. Army Japan said two people on Okinawa had contracted COVID-19 between April 7 and Wednesday. One was in quarantine after arriving in Japan and the other came up positive on the test required to leave the country, according to an Army news release.