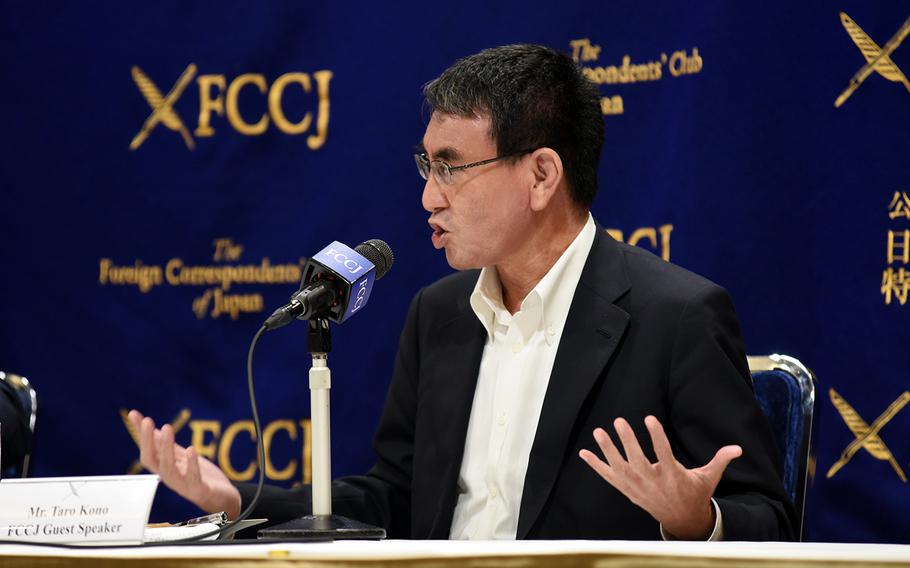 “We need to assess China’s capability and intention,” Defense Minister Taro Kono, speaking in English, said at the Foreign Correspondents’ Club of Japan.

China has gone from a nation without modern fighter jets, submarines or frigates in the early 1990s to one with more than 1,000 fourth- and fifth-generation fighters, he said. Japan has a little over 300 of these aircraft in its Air Self-Defense Force.

“In the East China Sea our fighter jets scramble against Chinese airplanes almost every day, sometimes more than once,” he said.

Japan and China have overlapping territorial claims in the East China Sea, with valuable natural resources at stake.

China is also opening a wide gap between the two nations’ military arsenals, Kono said, and is building many submarines, frigates and destroyers.

“Ships with guns are trying to violate our territorial waters constantly and our coast guard is doing a great job near Senkaku Islands,” he said, referring to the Japanese-administered islands west of Okinawa that are also claimed by China and Taiwan.

A Chinese submarine was detected June 18 near Amami-Oshima, an island in Kagoshima prefecture between the southern tip of Kyushu and Okinawa, Kono said.

“We don’t usually make announcements about submarines; we don’t even tell if we recognize there is a submarine or not, but I think sometimes we need to raise awareness of what is going on around Japan,” he said.

Beijing’s actions have also been alarming in the South China Sea, where it has built up and militarized islets in disputed waters, Kono said. He noted that a Chinese vessel sank a Vietnamese fishing boat there in April.

Other areas of concern, he said, are China’s erosion of the “one country, two systems” principle in Hong Kong and its clashes on the shared mountain border with India.

Meanwhile, the Japanese are watching “quite strange” events in North Korea where the nation’s leader, Kim Jong Un, may have health issues or is avoiding public appearances because of the coronavirus, Kono said.

The North’s recent bellicose statements toward South Korea is an effort to distract its citizens from a poor harvest or sluggish economy, he said.

Turning his remarks toward home, Kono once more addressed the decision announced last week to freeze procurement of Aegis Ashore systems for Japan Self-Defense Force bases in Yamaguchi and Akita prefecture. That decision, he said, was due to his inability to guarantee that rocket boosters from the system’s interceptor missiles would fall within those bases.

He also noted that thousands of Japanese service members have been helping with their country’s response to the coronavirus, but not one of them has tested positive so far.

“That tells you how they strictly follow the regulations and orders,” he said.

But balancing the military’s security duties with battling the coronavirus and responding to typhoons in coming months will be a challenge, Kono added.