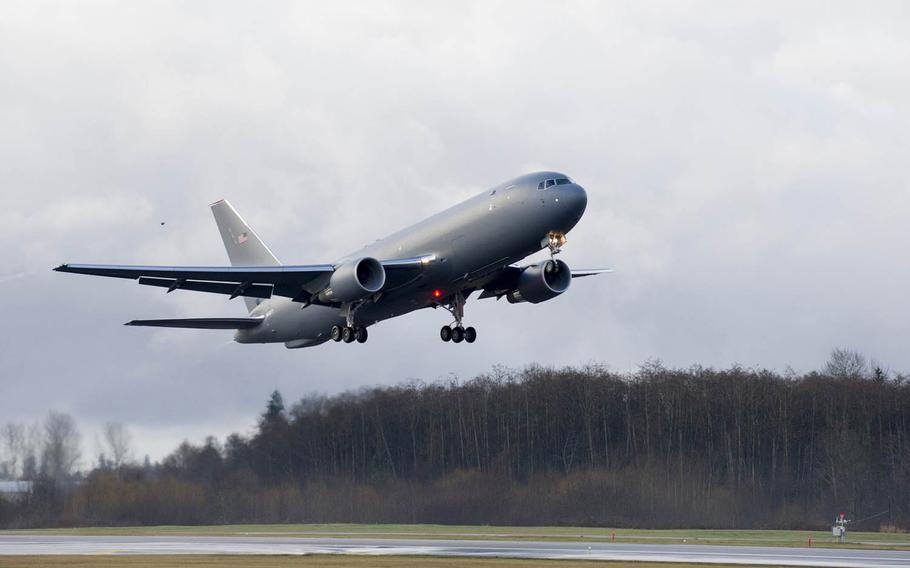 A KC-46A Pegasus takes off on its inaugural test flight Sept. 25, 2015, from Paine Field in Everett, Wash. Japan will purchase the new Boeing midair refueling aircraft, in part because it will help its forces train with the United States, Japanese officials said. (Courtesy of the U.S. Air Force)

Japan chose the Pegasus — which is slated to eventually replace the U.S. KC-135 fleet after its scheduled delivery in 2017 — over an offering from Europe’s Airbus.

Japan Minister of Defense Gen Nakatani called the Pegasus “a superior model for U.S. and Japan bilateral operation and training,” according to a Friday news conference transcript.

In recent years, Japanese fighter jet scrambles have increased in response to potential airspace violations from China and Russia, according to Japan Defense Ministry statements.

The Pegasus can carry up to 212,299 pounds of fuel, according to Boeing’s website.

The U.S. Air Force will acquire 179 KC-46 aircraft by 2027, Boeing said. The Air Force’s KC-135 Stratotankers were delivered between 1957 and 1965, according to the Air Force’s website. They have received periodic upgrades to engines, avionics and other systems.