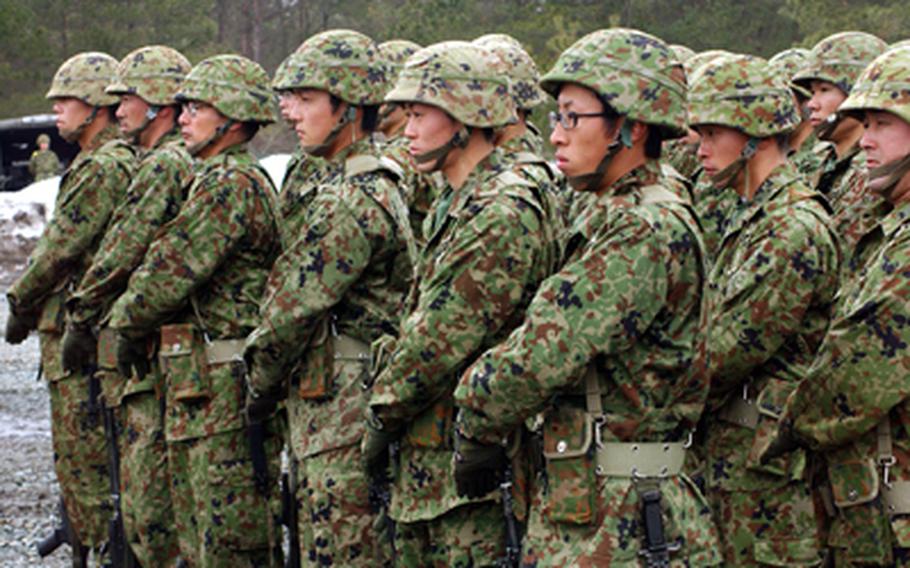 Japan on Friday replaced its Cold War-era defense strategy with what it called a &ldquo;dynamic force&rdquo; approach that will shift its security focus away from Russia and toward more immediate threats such as North Korea, and possibly China.

The National Defense Program Guideline, released by the prime minister&rsquo;s office in Tokyo, calls for scaling back its military position in the north &mdash; geared to stop a land invasion by Russia &mdash; in favor of beefing up mobile forces in the southwest near Okinawa, where China&rsquo;s navy has become a growing presence and where a concentration of U.S. forces in Japan are already stationed.

The new defense plan also calls for increasing regional security ties with the U.S., India, Australia and South Korea, noting the &ldquo;grave&rdquo; and &ldquo;immediate&rdquo; threat posed by North Korea, which threatened Friday to retaliate with force if South Korea goes ahead with a planned live-fire exercise on the island hit by North artillery last month.

Japan will acquire six new submarines, equip two more of its warships with Aegis missile-defense capabilities and build three additional ground-based missile defense units &ndash; systems it&rsquo;s developing with the U.S. &mdash; while slightly reducing ground troops and cutting the number of tanks from 600 to 400, according to the new guideline.

Japan already is collaborating with the U.S. on Aegis and Patriot missile interceptors and has an advanced anti-submarine warfare system.

The previous defense policy &ndash; last revised in 2004 and only sporadically updated since the concept was adopted in 1976 &ndash; was &ldquo;a rather static idea,&rdquo; Shikata said.

While the new concept points toward a slightly more aggressive Japan, the guideline maintained the country&rsquo;s adherence to its pacifist constitution and defense-only military orientation.

No changes to the peace-oriented rhetoric of Japan&rsquo;s defense or foreign policies were expected in the newest National Defense Program Guideline, Sheila Smith, senior fellow for Japan Studies at the Council on Foreign Relations in Washington told Stars and Stripes earlier this month.

To avoid the political backlash likely to accompany any attempt at such a fundamental change in Japan, Smith said, officials will likely continue passing individual laws that direct certain military assets. One such example is a 2005 law that increased the military&rsquo;s decision-making ability against a missile strike, the essence of which was telegraphed to Pyongyang following its 2009 launch of an intermediate-range missile, she said.

&ldquo;The Korean Peninsula and North Korea are imminent and concrete threats to Japan, while China is more of a medium-term threat. ... It is a major risk factor for Japan&rsquo;s security in the southwestern islands and the Japan-U.S. security alliance in the long run,&rdquo; Hideshi Takesada, executive director at the National Institute for Defense Studies, told The Associated Press on Friday.

While the guideline called China&rsquo;s growing military and its lack of transparency as &ldquo;a matter of concern for the region and the international community&rdquo; it did not specifically address the territorial dispute over the islands in the East China Sea &ndash; known as the Senkakus in Japan and the Diaoyus in China. Controversy over the rights to those islands &ndash; and any resources they may contain -- was re-ignited in September when Japan detained but later released a Chinese fisherman whose boat collided with a Japanese coast guard vessel near the uninhabited chain.

The Japanese island of Okinawa, where roughly one-half of the 47,000 U.S. troops stationed in Japan are based, is also in that region.

Shikata said shoring up the southwest would fill a gap where Japan&rsquo;s self-defense forces are sparse, but emphasized that the move was not directed at any specific country.

Despite the stronger language toward China in the guideline, it calls for increasing &ldquo;confidence and cooperation&rdquo; with both China and Russia. Though the Cold War-era concerns about Moscow have cooled, the guideline characterized the country&rsquo;s military activities as &ldquo;increasingly robust.&rdquo;

New diplomatic tension between Japan and Russia surfaced in November when officials from both countries began visiting the Kirul Islands off Japan&rsquo;s northernmost coast, which both claim as sovereign territory.

&ldquo;Relations between Japan and Russia will become solid if the territorial issue is settled,&rdquo; Foreign Minister Seiji Maehara told reporters after viewing the islands by plane earlier this month, Japan&rsquo;s Kyodo news service reported this week.

Japan&rsquo;s move to bring a more flexible force to the south jibes with the U.S. concentration of Marines on Okinawa, touted by American officials for their ability to rapidly deploy to any number of contingencies in Northeast Asia, though regional efforts are now focused on hedging against an increasingly hostile North Korea.

The U.S. has been pushing to bring Japan and South Korea together for military exercises in the aftermath of North Korea&rsquo;s latest attack on the south and revelations about its growing nuclear capability last month. Both countries declined, with officials on both sides saying that kind of move will take time because of lingering tensions in Korea over Japan&rsquo;s colonial rule from 1910 to 1945.

Adm. Mike Mullen, chairman of the Joint Chiefs of Staff, last week urged the two countries to move beyond 20th-century issues to better protect the region.

Despite U.S. efforts to forge new partnerships between Japan and South Korea, there is no effort under way to create a NATO-like operational integration of forces, the State Department said this week.

Japan&rsquo;s new guideline also recommended the country consider easing its ban on weapons exports, which now make it difficult for the Japanese government and private industry to sell or jointly develop defense technology with other countries. The U.S. is exempt from the ban but lifting it would ease potential roadblocks for transferring U.S.-Japan missile defense technology to Europe as part of a new NATO missile shield.