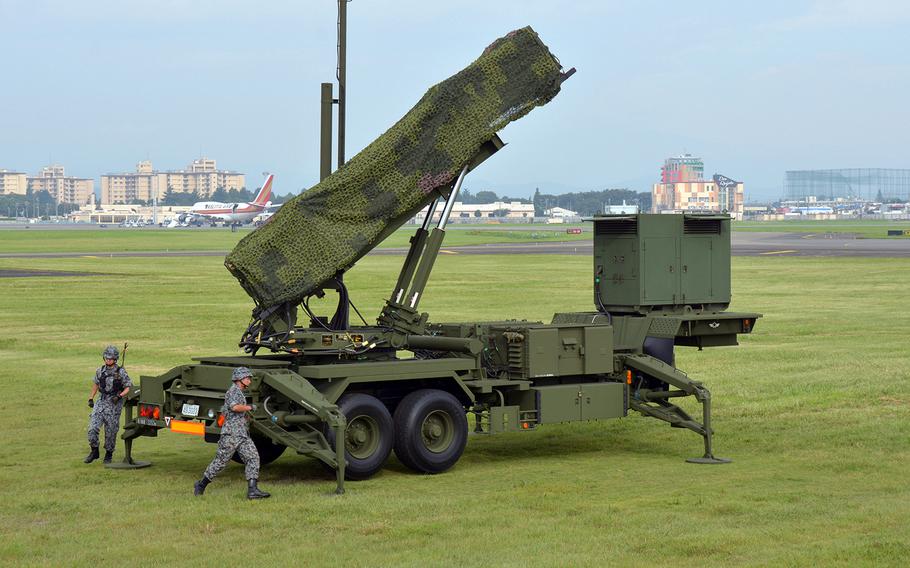 Members of the Japan Air Self-Defense Force set up a Patriot missile-defense battery at Yokota Air Base, Japan, during a demonstration in August 2017. (Seth Robson/Stars and Stripes)

TOKYO — The Japan Air Self-Defense Force deployed Patriot missile launchers to various spots, including a park in central Tokyo, during an exercise Wednesday, according to government officials.

The training aimed to improve the force’s “tactical capability involving ballistic missile measures and build a sense of safety and security among the public by showing readiness and preparedness,” Defense Minister Taro Kono told reporters during a news conference Tuesday.

The drill was an “extremely important opportunity” for the Japan Self-Defense Forces to be ready for every kind of threat, he said.

The exercise involved about 30 troops from the 1st Air Defense Missile Group setting up and then dismantling the PAC-3 battery in about 20 minutes at Tokyo Rinkai Disaster Prevention Park.

JASDF plans to conduct similar exercises throughout Japan, according to a statement.

Earlier this month, North Korea confirmed that it successfully test-fired a new submarine-launched ballistic missile days before the communist state was due to start nuclear talks with the United States.

The Pukguksong-3 missile was launched Oct. 2 from the water near the eastern city of Wonsan, the state-run Korean Central News Agency reported.

Japan’s missile-defense training was just the fourth time troops had conducted such a deployment exercise outside of Japanese or U.S. military bases, officials said.

The last off-base exercise was held at a park in Osaka in 2013. In August 2017, JASDF demonstrated a Patriot missile-defense system at Yokota Air Base, home of U.S. Forces Japan in western Tokyo, just hours after a North Korean missile flew over Hokkaido.