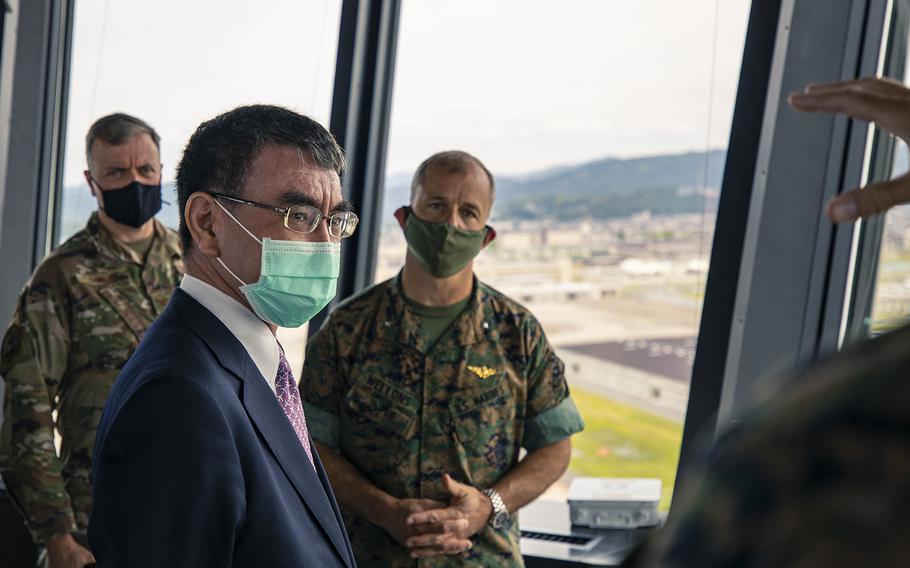 CAMP FOSTER, Okinawa — Four days after a U.S. military family in Japan tested positive for the coronavirus, the country’s defense minister on Friday called on the U.S. military to test all its personnel before they leave the United States.

“We believe that if we can detect these asymptomatic personnel prior to departure [from the U.S.], we can take different measures to contain the virus,” Taro Kono told reporters during a press conference in Tokyo.

U.S. military personnel who fly into U.S. air bases in Japan via the Patriot Express, a government-contracted flight, are not tested for the coronavirus, according to Japan’s Ministry of Foreign Affairs. They are tested only if they enter the country via commercial airlines at Narita and Haneda airports in the Tokyo area.

“I know the U.S. military quarantines SOFA personnel prior to entering Japan,” Kono said, “but they have not tested them.”

Service members, Defense Department civilian employees, contractors and their families are covered by the status of forces agreement, or SOFA, between Japan and the United States.

U.S. Forces Japan did not immediately respond Friday afternoon for a request for comment on Kono’s remarks.

On Monday, a U.S. military family of three flew from Tokyo to Marine Corps Air Station Iwakuni via a Japanese airline after providing false information about their travel plans, Kono said earlier in the week. Later, results of tests taken at their arrival Sunday in Tokyo came back positive.

Kono said the U.S. and Japan are working to ensure another such incident never occurs again.

New U.S. military arrivals are barred from public transportation but must go directly into a two-week quarantine. A spokesman for MCAS Iwakuni on Thursday said contact tracing showed a low risk of further infection from the three individuals.

Including three previously reported cases at Kadena Air Base, the U.S. military on Okinawa as of Friday has reported 141 cases, most of them associated with a cluster outbreak after the Fourth of July weekend.

The same health official said an 80-year-old taxi driver who tested positive for the virus this week is experiencing only mild symptoms. The driver often picked up fares at Camp Hansen.

“We are relieved to hear the patient in his 80s is in mild condition as we were very concerned because of his age,” the official said.