Japan looks to join India, US in naval exercise 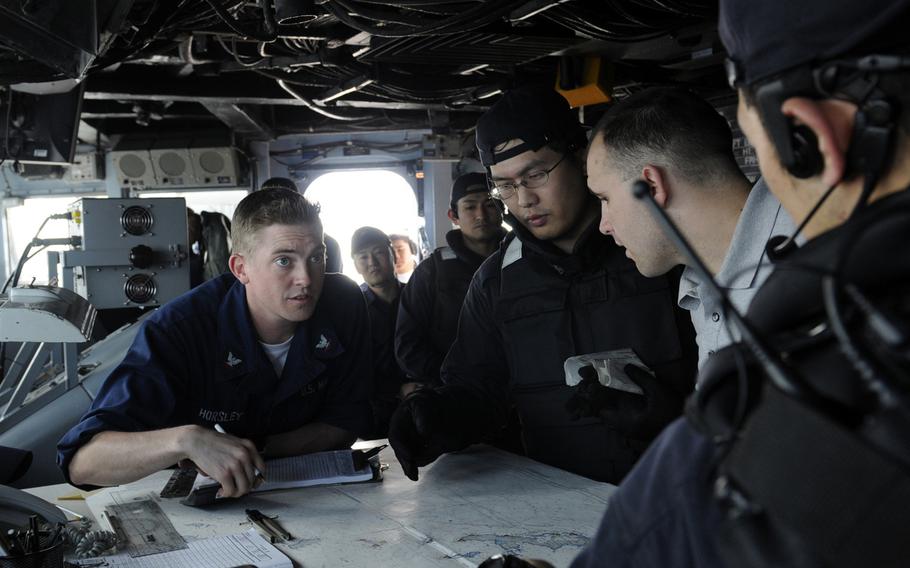 Petty Officer 3rd Class Philip Horsley talks with members of the Japan Maritime Self-Defense Force aboard the USS Blue Ridge during Exercise Malabar 2009. The Japanese are asking to be included in Malabar, which has been only a bilateral exchange between the United States and India in more recent years. (Daniel Viramontes/Courtesy U.S. Navy)

Petty Officer 3rd Class Philip Horsley talks with members of the Japan Maritime Self-Defense Force aboard the USS Blue Ridge during Exercise Malabar 2009. The Japanese are asking to be included in Malabar, which has been only a bilateral exchange between the United States and India in more recent years. (Daniel Viramontes/Courtesy U.S. Navy) 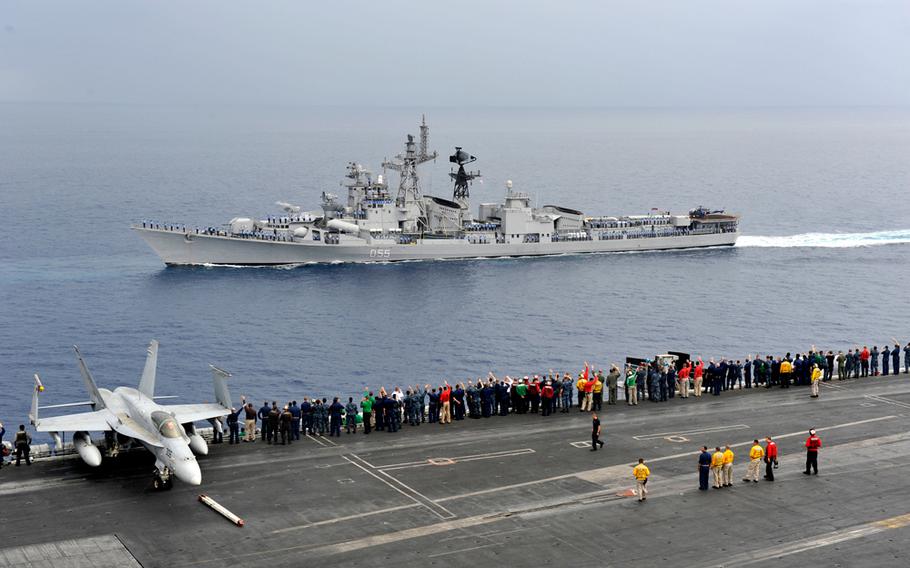 Naval officers from the U.S. and India chat aboard the USS McCampbell during a reception for the exercise Malabar 13, Nov. 13, 2013. (Paul Kelly/U.S. Navy)

YOKOSUKA NAVAL BASE, Japan — The Japanese Self-Defense Force wants to join an annual sea drill held by the United States and India later this year, according to Indian media reports.

The request to participate in the Malabar exercise came during a four-day visit to New Delhi last week by Japanese Defense Minister Itsunori Onodera, and just one month after Japan and India held their first-ever bilateral exercise in the Bay of Bengal.

“During the meeting with [Indian defense minister] AK Antony, I asked for the participation of the Japanese Maritime Self-Defense Forces in the naval war games,” Onodera said recently, according to The Times of India.

“This is not targeting a specific country,” Onodera later added. “This is an exercise between three friendly countries to participate for security of sea lanes; this is an important exercise.”

Neither India nor the United States has publicly said yet whether Japan’s request would be accepted. Japanese Defense Ministry officials were unavailable for further comment Monday, a national holiday in Japan. No date has been specified for the exercise, which most recently was held in November.

Japan last participated in a Malabar exercise in 2009, when part of the drill was held near Okinawa. Since then, a dispute over ownership of a small island group between Okinawa Prefecture and China, known as the Senkaku by Tokyo and Diaoyu by Beijing, has soured relations between the two countries.

The islands, which have been administered by Japan since the U.S. gave them back in 1972, have sparked China and Japan to scramble fighter jets in their defense during the past year, and also provoked tensions at sea.

Indian news outlets wrote last year that India withdrew from plans for a multilateral exercise with the U.S. and Japan off the coast of Guam because of how China might have perceived the exercise, though Indian officials did not publicly comment.

Following that withdrawal in 2013, a Chinese People’s Liberation Army platoon deployed to Indian-administered territory in Aksai Chin, which China considers part of Tibet.

The platoon remained several miles south of the “line of actual control” — a makeshift border agreed upon following the 1962 Sino-India border war — and left only after several weeks of negotiation and an Indian concession to destroy bunkers in another sector, according to Indian media reports.

Malabar 2013 took place in November and included the Yokosuka-based USS McCampbell. The exercise was considerably scaled down from 2012, when it included the USS Carl Vinson carrier strike group.

The at-sea portions in 2011 were conducted in the western Pacific Ocean, east of the Luzon Strait and east of Okinawa, according to past Navy reports.