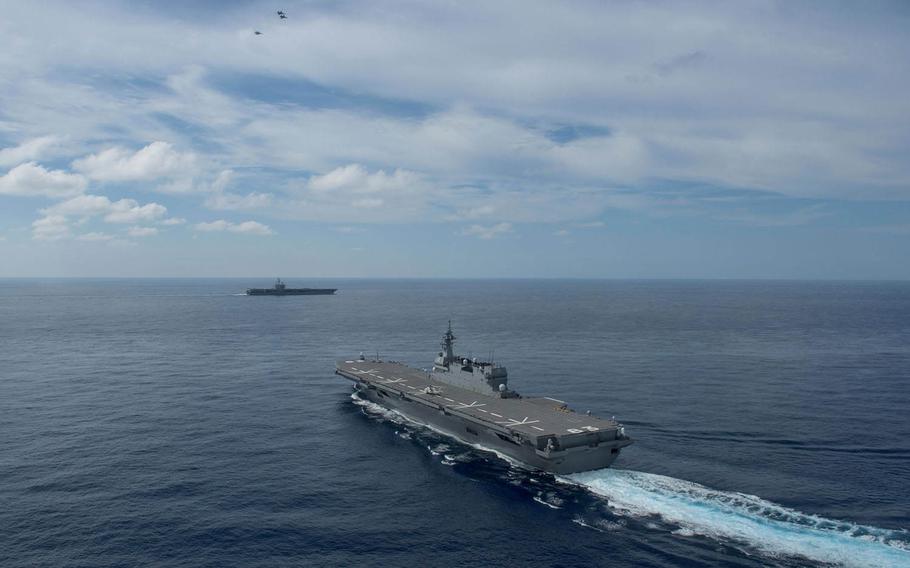 Japan's Defense Ministry canceled a port call at Busan by the helicopter carrier JS Izumo, pictured here during an exercise with the U.S. Navy on June 15, 2017, due to a dispute with South Korea. (Nathan Burke/U.S. Navy photo)

TOKYO — Japan’s Defense Ministry announced Tuesday that it will cancel a port call in South Korea amid tense relations between the two countries.

Japan Maritime Self-Defense Force ships, including the helicopter carrier JS Izumo, planned to anchor in Busan in April before participating in a multilateral exercise as part of the Association of Southeast Asian Nations Defense Ministers’ Meeting.

“It is important to participate in the maritime exercise … from the perspective of maintaining and enhancing the free and open Indo-Pacific,” ministry spokesman Hajime Aoyagi told reporters Tuesday.

However, he said the ministry decided it was appropriate to cancel the port visit when considering current Japan-South Korea relations.

“It is important to respond in a way for Japan-South Korea relations to progress constructively,” he said. “We have decided that [canceling the port visit] was the most appropriate response.”

Japan and South Korea have been in a dispute over whether a South Korean navy destroyer directed its fire-control radar at a Japanese P-1 patrol aircraft in December.

South Korea’s Ministry of National Defense said last week that it will postpone the visit to Japan by the commander of the South Korean navy’s First Fleet scheduled this month, according to a Kyodo News report.