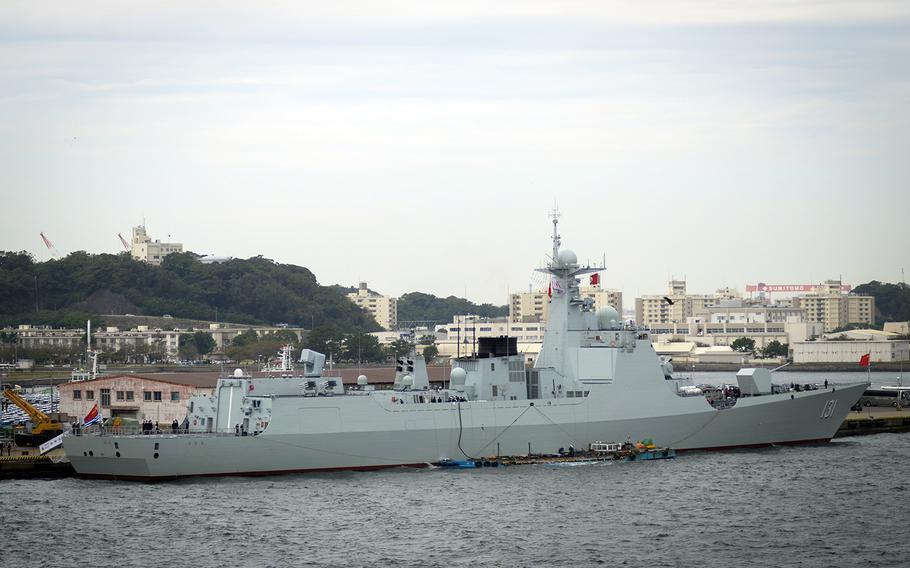 The Chinese destroyer Taiyuan anchors at Yokosuka Port, less than a mile from Yokosuka Naval Base, Japan, Thursday, Oct. 10, 2019. The ship was scheduled to participate in Japan's international fleet review, which has been canceled after Typhoon Hagibis. (Christian Lopez/Stars and Stripes)

YOKOSUKA NAVAL BASE, Japan – The Japan Maritime Self-Defense Force canceled an international fleet review planned for Monday to focus instead on disaster relief in the wake of Typhoon Hagibis.

The deadly storm battered Sagami Bay, the scheduled site of the review, as it moved eastward from the Izu peninsula, where it made landfall at about 7 p.m. Saturday, to the Miura peninsula, where Yokosuka Port is located.

The JMSDF canceled the event to “expand all possible means to disaster relief efforts,” according to a Sunday news release.

Officials were unsure of the number of casualties on Monday. Japanese media reported that Hagibis had left dozens dead, nearly 200 injured and many missing with rescue efforts for stranded residents still underway.

The storm, described as the strongest to hit Japan in decades, brought heavy rain and sustained winds of up to 90 mph. Rivers draining the Kanto Plain, home to many Tokyo-area military bases, surged over their banks in some places, flooding wide swaths.

The city of Yokosuka, where the ships were gathering, was hit by power outages, torn roofs and downed trees and traffic lights in the storm.

Monday’s review would have involved 46 vessels and 40 aircraft from Japan and seven other nations, including the U.S., Canada, Singapore, the United Kingdom, India, Australia and, for the first time, China.

Japan and China exchanged visits by naval vessels this year despite an ongoing dispute over ownership of a chain of small islands in the East China Sea called the Senkakus in Japan and the Diaoyu in China.

Chinese guided-missile destroyer Taiyaun arrived Thursday at Yokosuka Port ahead of the storm and less than a mile from Yokosuka Naval Base, home of the U.S. 7th Fleet. The JMSDF held a welcoming ceremony for the ship at the pier, public broadcaster NHK reported.

In April, Japan sent a guided-missile destroyer, the JS Suzutsuki, to Qingdao for the Chinese navy’s international fleet review, the first JMSDF visit to China in seven years.

But Japan snubbed another ally, South Korea, this year as the two countries feud over trade policy and intelligence sharing.

The JMSDF had already canceled preview events, including public access to its vessels on Saturday and Sunday, as forecasts put Hagibis on track for eastern Japan.

However, ticket holders who expected to board those ships during preview events or the review itself can still do so at Yoshikura and Funakoshi piers in Yokosuka and the Kisarazu public pier in Chiba prefecture from 9 a.m.-4 p.m. Monday, according to the JMSDF statement.

The JMSDF does not plan to reschedule this year’s fleet review; the next one is set for 2022, according to a JMSDF spokesman. Government spokespersons in Japan commonly provide information on condition they are not personally identified.

The fleet reviews are scheduled every three years.

This is the third time a Japanese fleet review was canceled, and the first time in 50 years, the spokesman said. Typhoons in 1958 and 1959 canceled the events.