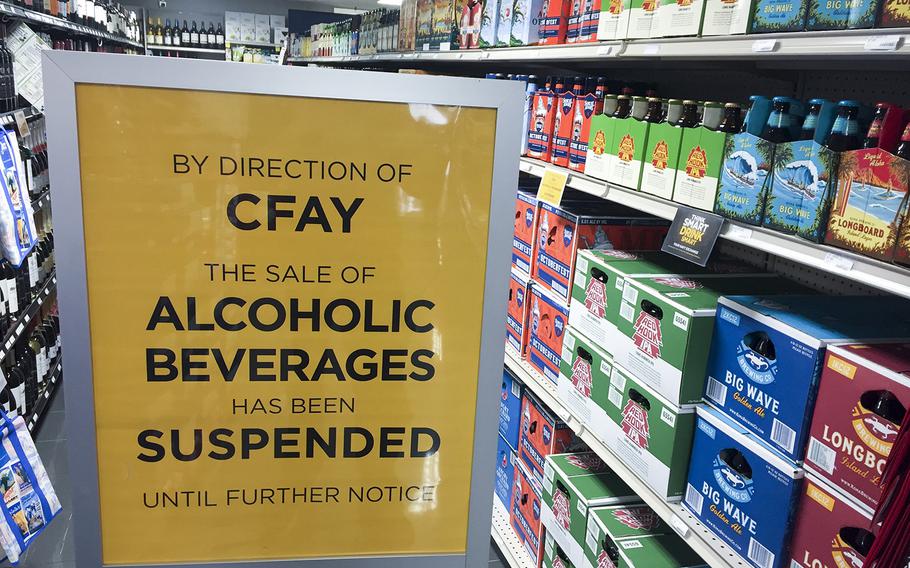 A sign posted inside a Navy Exchange at Yokosuka Naval Base, Japan, informs servicemembers of an alcohol ban, Monday, Nov. 20, 2017. (Tyler Hlavac/Stars and Stripes)

A sign posted inside a Navy Exchange at Yokosuka Naval Base, Japan, informs servicemembers of an alcohol ban, Monday, Nov. 20, 2017. (Tyler Hlavac/Stars and Stripes) This image from a Tokyo Broadcasting System program shows the Marine-driven vehicle involved in a fatal crash in Naha, Okinawa, Sunday, Nov. 19, 2017. (Screenshot from TBS)

YOKOTA AIR BASE, Japan – The U.S. military has ordered servicemembers in Japan not to buy or consume alcohol until further notice after a fatal vehicle accident involving a 21-year-old Marine on Okinawa.

The alcohol restriction, which applies on and off base, took effect Sunday evening and will remain in place until further notice, said USFJ spokesman Capt. Tyler Hopkins.

All servicemembers on Okinawa are under “Tier 3 Liberty Status,” according to a message issued late Sunday by III Marine Expeditionary Force.

“Marines, Soldiers, Sailors and Airmen must return to quarters and cease consuming alcohol effective immediately,” the message said. “Off base liberty is NOT permitted in Okinawa. Authorized leave is to be conducted outside Okinawa.”

Okinawa is home to about half of the approximately 100,000 U.S. servicemembers, civilian base workers and their families stationed in Japan.

Commanders across Japan have been directed to “immediately lead mandatory training to address responsible alcohol use, risk management and acceptable behavior,” a USFJ statement said. All military members and U.S. government civilians in Japan are required to attend.

“The vast majority of Soldiers, Sailors, Airmen, Marines and civilians in Japan serve honorably and make great contributions to the defense of Japan,” the statement added. “When our service members fail to live up to the high standards we set for them, it damages the bonds between bases and local communities and makes it harder for us to accomplish our mission.”

James-McLean was still in custody on Monday, and police planned to refer his case to prosecutors on Tuesday, the Naha police spokesman said.

Taira died at local hospital from chest wounds and bleeding suffered in the crash, the spokesman said. James-McLean had minor injuries.

Police said the minitruck that James-McLean was driving belonged to the U.S. military, and that U.S. officials told them he was off duty at the time of the crash.

Servicemembers on mainland Japan seemed to be taking news of the alcohol ban in stride.

Staff Sgt. Ian Rose of the 515th Air Mobility Operations Group at Yokota Air Base in western Tokyo expected the restriction to affect his Thanksgiving.

“Drinking is a regular part of my off-duty life, so that’s going to change my weekend plans,” he said. “I guess I’ll have to figure out something else to do.”

Petty Officer 2nd Class Brittany Buhmman, a hospital corpsman at Naval Air Facility Atsugi, pointed out there’s a lot more to do in Japan than just “going out and getting trashed on the weekend.”

“We’re in a gorgeous country that people need to take some time and experience sober,” she said. “If liberty isn’t restricted, there are so many things [servicemembers] can go out and do.”

“But I understand that the ambassador and USFJ commander had to show that they took some sort of action to address the problem,” he said. “It’s a necessary evil.”