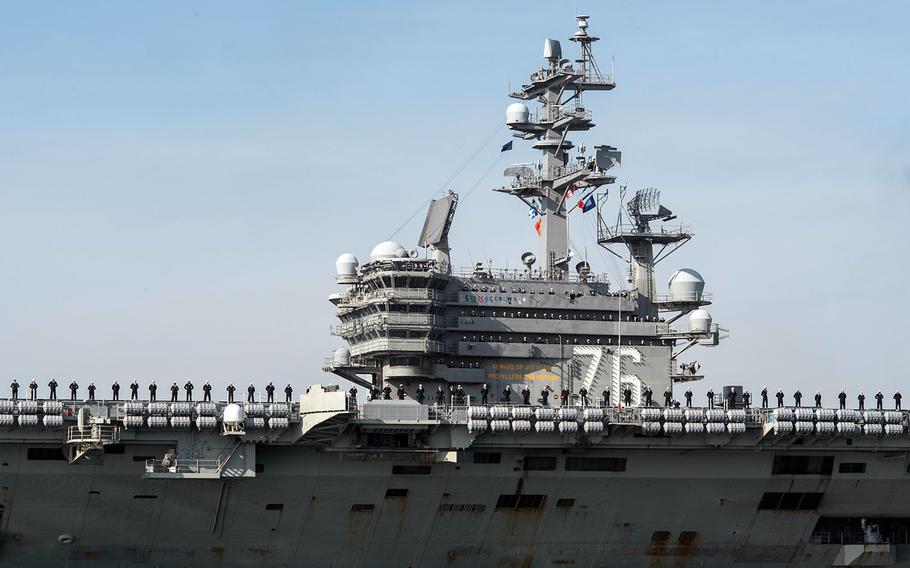 YOKOSUKA NAVAL BASE, Japan — The Navy is investigating an alleged illegal drug ring involving at least a dozen sailors at the home of the aircraft carrier USS Ronald Reagan, Naval Forces Japan and the 7th Fleet.

The sailors, some of whom are assigned to the carrier, are suspected of buying, selling and using illegal drugs, including LSD and ecstasy, according to a report released Friday by The Wall Street Journal. The Navy is also looking into whether the sailors were buying and selling drugs online or distributing them to Japanese citizens outside Yokosuka.

Yokosuka Naval Base spokesman Sean Kelly confirmed to Stars and Stripes on Saturday that the Naval Criminal Investigative Service is looking into the allegations; however, he would not provide more details, citing the ongoing investigation.

“The Navy has zero tolerance for drug abuse and takes all allegations involving misconduct of our sailors, Navy civilians and family members very seriously,” he said.

The allegations came to light on Feb. 6 when the Navy received a tip that a sailor had been using illegal drugs. The sailor was detained before leading investigators to others aboard the carrier who he claimed were distributing or using illegal substances, according to the Wall Street Journal report.

Japanese authorities have also been brought into the investigation amid suspicions that drugs may have been distributed to locals, the report said. A suspicious package belonging to one of the sailors was intercepted by a local postal service.

A Kanagawa Prefectural Police Department spokesman would not confirm or comment on the investigation on Saturday.

The drug probe is the latest in a series of recent misconduct issues involving Yokosuka-based sailors.

On Feb. 3, a Ronald Reagan sailor was arrested by Tokyo police after being accused of sexual assault. The Navy released few details about the incident; however, an official told Stars and Stripes that the victim was not a Japanese national.

A short-term alcohol ban was placed on the carrier’s sailors the following day. Capt. Michael Donnelly, the Ronald Reagan’s commander, implemented the restriction after an uptick in alcohol-related incidents. The ban was lifted on Feb. 5 following an all-hands call aboard the ship.

One of those incidents involved a Ronald Reagan sailor being injured over the weekend at a Yokosuka barracks. Navy officials would not provide further details, but said the incident was under investigation and that the sailor was in stable condition.

Homeported at Yokosuka, the Ronald Reagan is the Navy’s only forward-deployed aircraft carrier and has a crew of approximately 3,000 sailors.