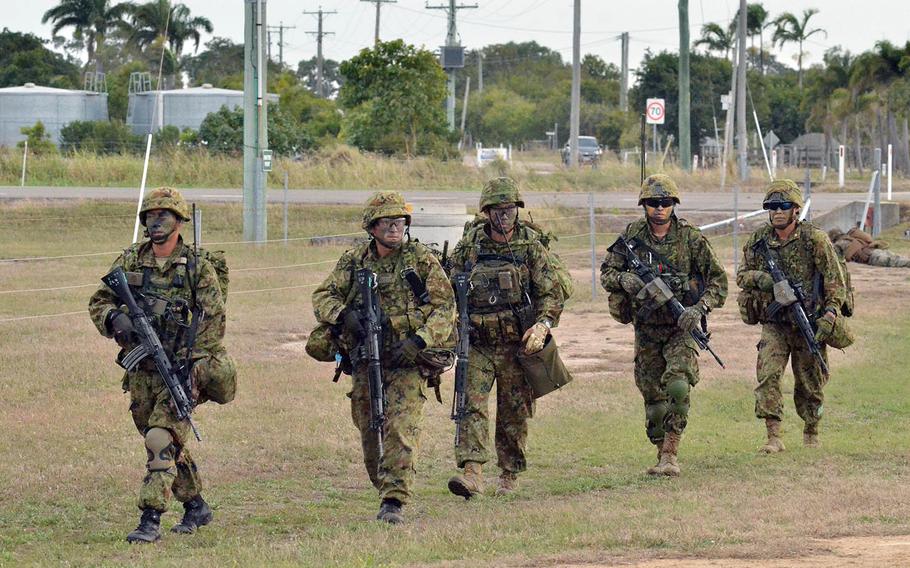 TOKYO — Australian troops will likely be a more common sight in Japan after the leaders of the two nations reached an agreement to facilitate training and operations on each other’s soil.

"In the Indo-Pacific region, security and defense cooperation between Japan and Australia, having the will and capacity to contribute to regional peace and stability, are becoming increasingly important," Suga said during the conference, which was filmed and posted on his office’s website.

"Under this backdrop, I hereby announce that … we have reached agreement in principle on a reciprocal access agreement, that we have been negotiating to elevate security and defense cooperation to a new level."

The agreement has been negotiated over six years but still must be ratified.

“We respect and appreciate that the only other nation that Japan has entered into such an agreement with was the United States,” Morrison said during the conference.

A status of forces agreement signed in 1960 sets the legal framework for basing about 135,000 U.S. troops, civilians and their family members in Japan.

Those installations include Yokota Air Base in western Tokyo, Yokosuka and Sasebo naval bases and Camp Zama on the main islands of Japan as well as Kadena Air Base, Marine Corps Air Station Futenma and White Beach Naval Base on Okinawa, according to the U.N.

“We share a great alliance with the United States,” Morrison said. “We also share a significant … trading relationship with China.”

In a joint statement, Morrison and Suga expressed serious concerns about the situation in the South and East China Seas where China has used force and coercion to press disputed territorial claims. They also expressed concern about the erosion of democratic freedom in Hong Kong.

The troop access agreement is the latest in a string of defense pacts between Australia and Japan, including a 2007 defense cooperation agreement and a 2013 deal to share military supplies that was expanded to include munitions in 2017.

Japanese and Australian warships, along with those from the U.S. and India participated in the Malabar drills in the Bay of Bengal earlier this month.

However, China will likely exert pressure on both countries to try to prevent something like that, he said in an email Tuesday.

The access agreement could facilitate Japan’s air force training Down Under and its navy making port calls in Sydney and near Perth on Australia’s west coast, Ross Babbage, a former Australian assistant defense secretary, said in an email Tuesday.

Australia’s air force and navy will be the most frequent visitors to Japan, he said.

Some visits will be routine refueling and rest and recreation stops but there will also be combined exercises and operations that also involve U.S. forces, Babbage said.

“The bottom line will likely be a substantial development of cooperative activity and a considerable strengthening of personal friendships,” he said. “We are witnessing a deepening of an informal and very trusting partnership that is verging on the edge of becoming a fully-fledged alliance.”