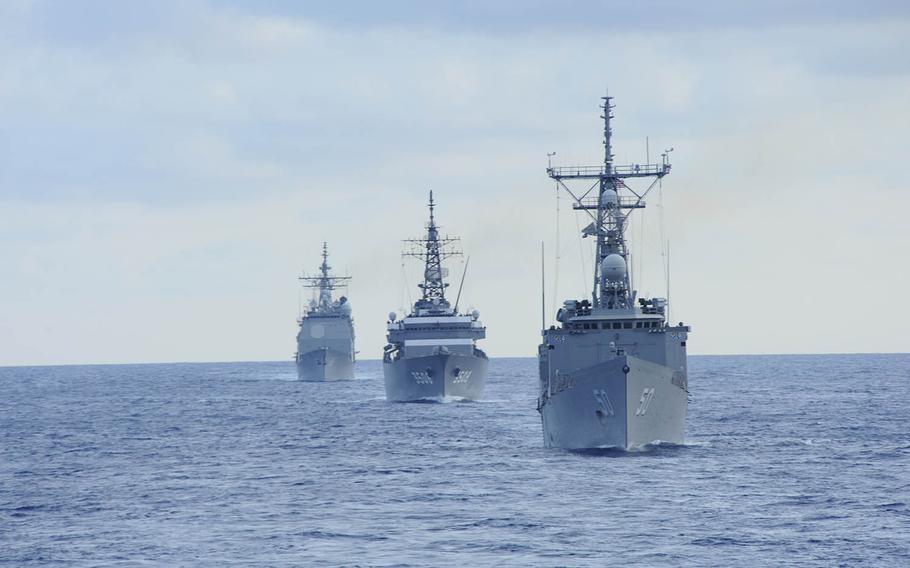 The plan, endorsed the same day by the ruling Liberal Democratic Party, may go to the Cabinet as early as next week, public broadcaster NHK reported Wednesday. The government expects to fund the vessels for the Japan Maritime Self-Defense Force next fiscal year, which starts in April.

The Defense Ministry is also seeking to add the equivalent of about $288 million to its FY21 budget, according to a report Tuesday by Japan's Kyodo news agency.

“I understand that these vessels equipped with the Aegis system, along with other Aegis vessels that are being developed, will make it possible to create a structure, which protects the entire nation constantly at all times and can respond to any situation,” Kato said during a press conference.

He did not say when construction on the ships would start.

The U.S.-manufactured Aegis Ballistic Missile Defense System is the seaborne version of a system designed to shoot down short- and intermediate-range missiles in flight. Some U.S. Navy Ticonderoga-class cruisers and Arleigh Burke-class destroyers — including several based in Yokosuka — are equipped with them.

Japan considered deploying Aegis systems on a floating platform at sea with the U.S. government after the original plan to build Aegis Ashore systems was canceled in June.

The defense minister at the time, Taro Kono, cited technical problems and cost overruns in his decision to freeze procurement of the ground-based systems. They were to be placed at Self-Defense Force bases in Yamaguchi and Akita prefectures.

Japan had already spent or allocated about $1.9 billion on the ashore systems when the plan was abruptly scrapped, Kyodo News reported in June. Local residents had expressed concerns about the potential health effects from the ashore system’s radar, along with the possibility of being targeted during an armed conflict.

Prime Minister Yoshihide Suga, who took office in September, instructed the new defense minister, Nobuo Kishi, to come up with an alternative plan by the end of the year.

The vessels will belong to the JMSDF, which could further burden a service already having difficulty filling its ranks. Kato said the government will work on measures to recruit and retain more personnel.

Kishi, during a meeting with Liberal Democratic lawmakers, also proposed extending the range of surface-to-ship missiles under development.

Critics said this may contradict with Japan’s Constitution, which allows the SDF to respond only for defensive purposes, but Kato said the extended-range standoff missiles would allow forces to respond from beyond enemy missile range.

“I understand that the purpose is to strengthen defense capabilities and will not be used to strike enemy territory nor being developed under a new policy regarding missile interception,” he said.