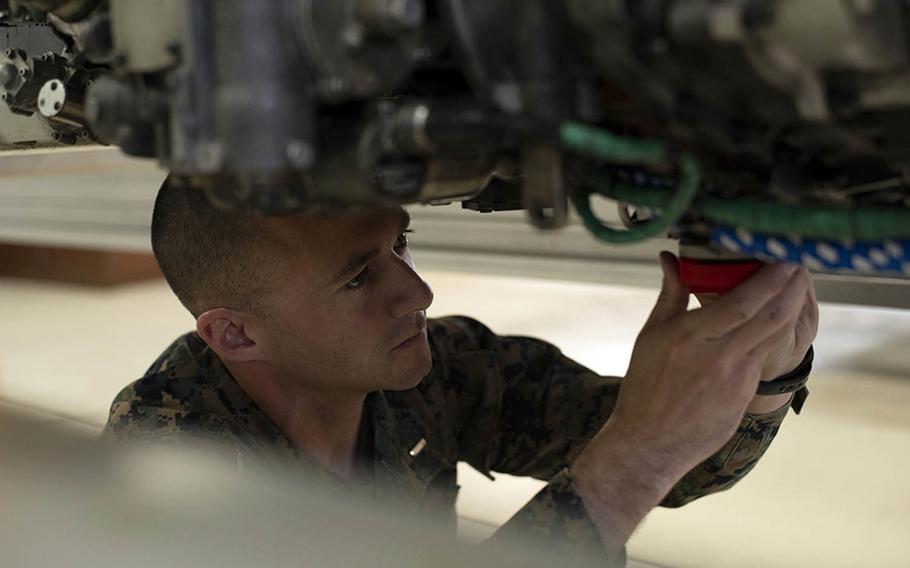 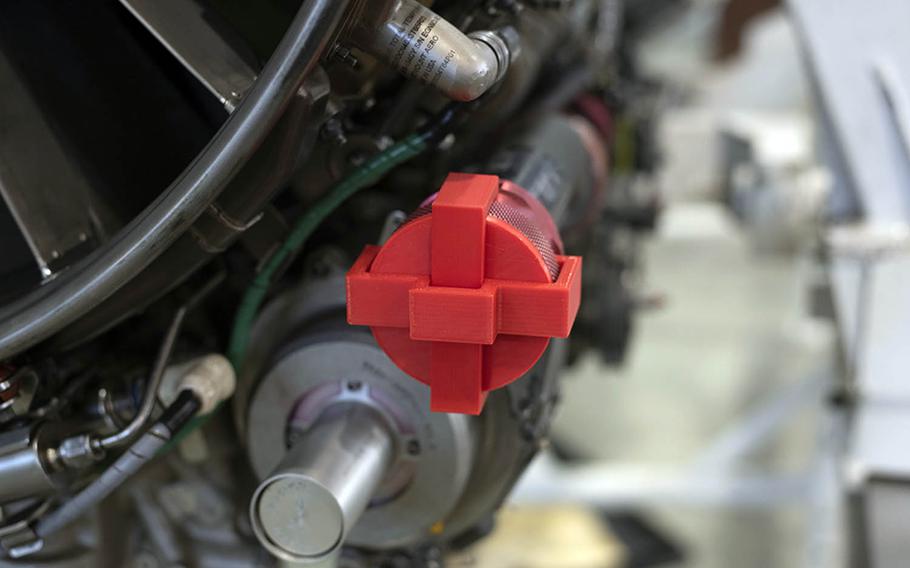 Buy Photo
A pair 3D-printed clips hold a cap onto the engine of an F/A-18 Hornet at Marine Corps Air Station, Iwakuni, Nov. 29, 2018. The plastic pieces allow an engine to be shipped without draining oil and hydraulic fluids. (James Bolinger/Stars and Stripes) 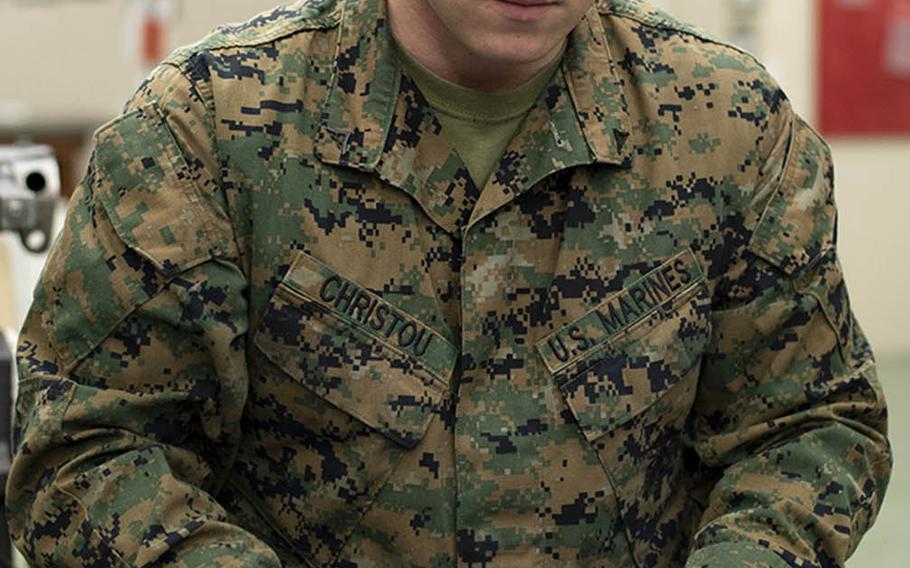 Called an engine ship kit, the first innovation is a set of plastic clips and plugs to prevent oil and hydraulic fluid leaking from aircraft engines removed for repairs. The other is a tool that helps maintainers grease the bearings on the F/A-18’s high-speed Gatling gun.

The kit eliminates the need for maintainers to travel to austere locations to drain oil and hydraulic fluids so an engine can be taken safely back to Iwakuni for repair.

The plastic drain plugs prevent the fluid from leaking and the clips ensure the plugs are not dislodged as the engine is readied for transport.

The kit is the brain child of 1st Lt. Simon Miller and Chief Warrant Officer 3 Mark Willems, who needed to get a broken F/A-18 engine from Wake Island to MCAS Iwakuni late last year.

The engine began to leak while a C-130 crew tried to load it, Garcia said. In the past, a team of maintenance Marines would have traveled to the location to prepare the engine for safe transport, but that takes away from their mission at MCAS Iwakuni.

To solve the problem, Willems had the idea of creating plugs that would stop the leaks. Miller created the pieces using 3D drafting software and MALS 12’s new 3D printers.

“I’m not really sure why no one thought to make this kind of kit before, but this design is going to have an impact across the Navy and Marine Corps,” Garcia said.

The same team behind the engine ship kit also created a tool that makes it easier for maintenance Marines to grease the bearing on the F-18’s M61A Vulcan, a Gatling-style rotary cannon that can fire 6,000 rounds a minute.

The bearing on the cannon must be packed with grease every 30,000 rounds, a job that used to take two Marines more than 30 minutes, said Cpl. Christian Smellie, an aviation life-support systems technician who works at Iwakuni’s 3D printing lab.

Smellie worked with ordnance Marines to design a plastic ring that is used to smash thick grease into the tightly packed bearing, cutting the maintenance time down to less than 10 minutes.

The current design, or “version 2.0,” is two pieces. A large ring holds the bearing in place and a smaller ring pushes the grease into the space between the ball bearings.

The pieces are printed to tight parameters to ensure that the compressed grease doesn’t ooze out the sides. The tight fit can make version 2.0 hard to remove, and the team is already working on version 3.0, which will have a handle to make removing the compression ring from the bearing easier.

The two products are so new that Navy Air Systems Command’s additive manufacturing team has not yet figured out how to track the possible savings, NAVAIR official Liz McMichael recently told Stars and Stripes in a phone interview. NAVAIR is a systems command that provides material support for aircraft and airborne weapon systems in Navy and Marine Corps.

The bearing packer could have impact across the Defense Department once it is complete, because the M61A is used in Navy and Marine Corps F/A-18s, and Air Force F-16s, F-15s and F-22s.