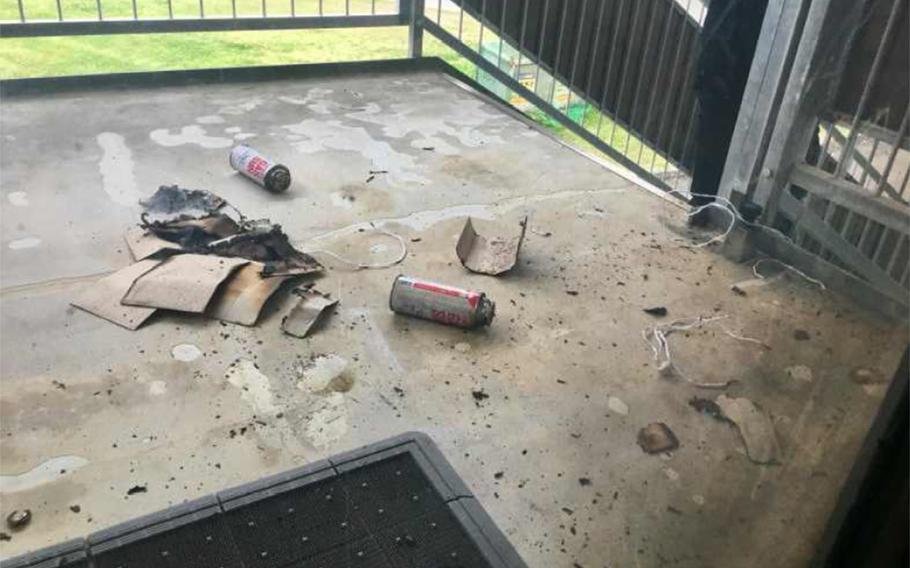 CAMP FOSTER, Okinawa — Japanese police and U.S. military officials are investigating after someone broke into a Marine Corps base and detonated a pair of small gas canisters outside a building that houses Japanese government officials.

The incident happened at about 6 p.m. Sunday at Camp Foster’s Okinawa Defense Bureau office, a bureau spokesman told Stars and Stripes. The office is in a remote compound across a road from the main base. It’s unclear if anyone was inside at the time.

There were no injuries, but the perpetrator apparently cut a fence to gain entry, said the spokesman for the bureau, which represents Japan’s Ministry of Defense on the island.

Bureau and Marine officials declined to provide details on damages or suspects. A photo released by the defense bureau showed two small gas canisters like those used in camping stoves and a burnt piece of cardboard.

“This incident is currently under investigation by both the USMC Criminal Investigation Division, and the Okinawa Prefectural Police,” Marine Corps Installations Pacific spokesman Maj. Andrew Aranda told Stars and Stripes in an email. “It would be premature to comment on any details at this time.”

The incident happened just days after Japanese Defense Minister Takeshi Iwaya announced that new landfill work would begin Monday for a controversial runway at Camp Schwab in the northern part of the island. The runway being built into Oura Bay will one day allow for the closure of Marine Corps Air Station Futenma and the relocation of Marine air assets to Schwab.

The issue has been contentious for over a decade as Tokyo pushes ahead with construction despite opposition from a majority of Okinawan voters. Seventy-two percent of voters who turned out for a referendum on the project last month voted against it.

Okinawa Gov. Denny Tamaki filed suit against the central government Friday at Fukuoka High Court Naha Branch to once again attempt to halt the project, the Okinawa Times newspaper reported. His predecessor, Takeshi Onaga, made several unsuccessful attempts to block it. Anti-military vandalism incidents aren’t uncommon on the island. On the evening of Dec. 22, someone spray painted a security camera, broke a window and threw a flare into the Okinawa Provincial Cooperation Office in Maejima, Naha. The Okinawa Provincial Cooperation Office is a recruitment office for the Japan Self-Defense Force and also houses the Naha office of the Okinawa Defense Bureau.

No injuries were reported but the flare ignited a bed on the first floor, Okinawa Fire Department West District spokesman Toshihiro Kuniyoshi said at the time. No suspects have been identified and no arrests have been made in that case.

“We will not tolerate such crime and we will cooperate with authorities to solve this case,” the defense bureau spokesman said Monday.