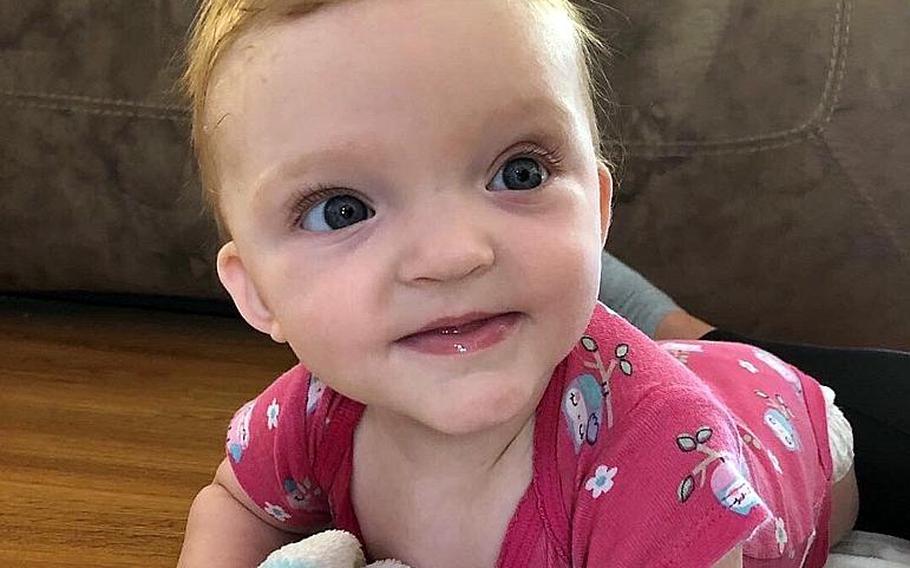 A GoFundMe page was set up Tuesday, Feb. 26, 2019, for a 7-month-old who died Sunday at an unlicensed day care at Aliamanu Military Reservation in Honolulu, Hawaii. (Via GoFundMe)

FORT SHAFTER, Hawaii — Katie Camario didn’t want to involve herself in the unlicensed day care in the house next to hers at Aliamanu Military Reservation in Honolulu, but her growing fear that something terrible could happen to a child there pulled her in. On Sunday, a 7-month-old girl died in the day care.

She and her Air Force husband had moved into the Army-managed housing in October 2017, and Camario quickly noticed the hubbub of children playing in her next-door neighbor’s back yard.

In the weeks to come Camario said she saw disturbing scenes of wailing, unattended children — most appearing to be less than 5 years old. She said she saw children chasing each other with large sticks, a screaming child’s head caught in playground equipment and, on one occasion, a toddler sticking a barbecue butane lighter in his mouth.

So she became involved, making numerous calls to the Army housing authority and the military police, but the unlicensed day care always reopened even after being raided by police several times.

Fed up, Camario filed a sworn complaint last week under the military’s Interactive Customer Evaluation, a grievance that would come to the direct attention of the commander of Army Garrison Hawaii. Military police shut it down again on Feb. 21.

The Honolulu Police Department has opened an “unintended-death” investigation into the girl’s death, according to Michelle Yu, an HPD spokeswoman.

An autopsy is pending at the medical examiner’s office, which had not released the girl’s name as of Tuesday.

A GoFundMe page set up Tuesday to raise money for the funeral identified the girl as Abigail.

Neighbors said the day care had the infant and an older sibling for an overnight stay.

There are “no suspicious circumstances or evidence of foul play at this time,” Yu said.

But Camario and several other neighbors of the day care excoriated Army officials at a town hall meeting Monday night at Fort Shafter for failing to evict the tenant long before now. The meeting was one in a series being held in Hawaii to address recent concerns about the condition of military housing, and officials did not seem prepared to handle questions about day care.

“If you all knew for the span of over a year now that this had been going on at this home, why did you let it go on for this long?” Camario said.

Asked for additional information Tuesday, Army Garrison Hawaii said it could not comment on specific facts of the case because of the ongoing HPD investigation.

So-called “black market” day cares are commonplace in Hawaii military housing because of the dearth of licensed centers.

“Moving to Oahu, every single military family is stuck with the decision of what to do with childcare,” Kelly Norris, an Aliamanu resident told the town hall panel. “We don’t have any. People wait for a year to get their children into the [Child Development Centers]. They are forced to use child care from people they don’t even know.”

“It’s once the second notice has occurred we will look into evicting you from the house,” Barrett said.

A second cease-and-desist order was sent to Camario’s neighbor in April 2018, he said.

Camario asked who enforces the policy of “one, two strikes, you’re out.”

In Camario’s sworn statement for the Interactive Customer Evaluation — which Barrett told the audience he had read — she described a “most alarming incident” on Jan. 8, 2018.

“I was in the house and heard a child’s voice yell, ‘Fire! Fire,’” she wrote in the statement, a copy of which Stars and Stripes obtained. “I knew no one would be outside with these kids, so I went to the window and saw a boy about 4-5 years old with a long lighter. He was holding the lighter trying to light the netting of the trampoline. That’s when I saw a flame come out of the lighter.”

A toddler who looked about a year old subsequently got the lighter and put it in his mouth, she said.

Camario called the military police, who responded and entered the day care, she said.

“Here’s the thing,” Camario told the panel of Army officials at the town hall Monday. “You all constantly tell us — you all who are supposed to keep us safe — drill it into our heads that if you see something, say something. I did.

“That mantra is only effective if you all take care of those offenses before it gets to this point where we have a dead baby.”