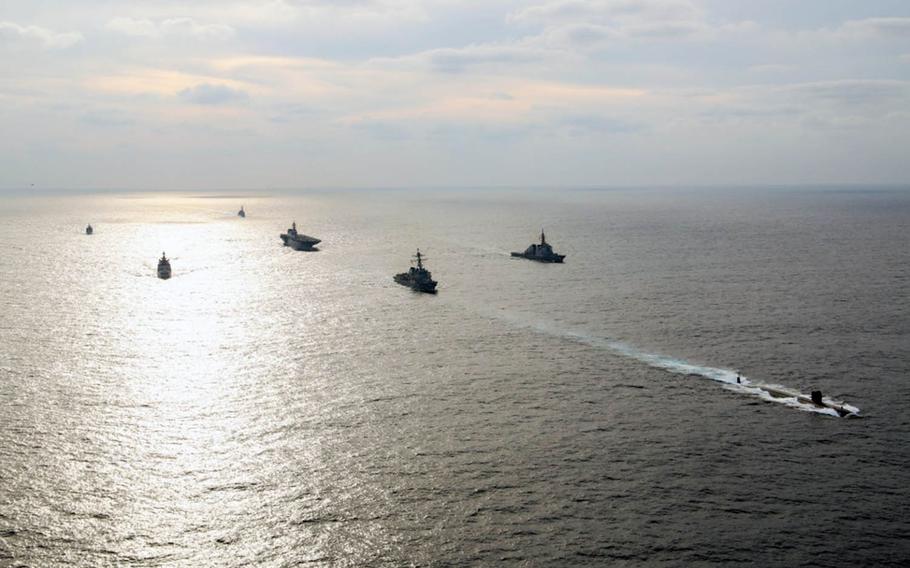 YOKOHAMA, Japan — China’s growing economic might and its “destructive behaviors” in the South China Sea mean for the first time in history one country could control both the Asian mainland and the seas around it, a former Indian foreign secretary said Sunday.

Amb Kanwal Sibal, a former Indian foreign secretary who spoke during a panel discussion on sea power, said China’s rise is intimidating. India sees China as its “greatest challenger,” he said. “Never in history has a country expanded at this rate.”

Sibal and experts from the U.S., Japan and Australia spoke of the Indo-Pacific region’s rising importance and the boiling tensions in the South China Sea. China views the resource-rich South and East China Seas as its territorial waters, though international law considers them international waterways.

The experts convened as part of the upcoming fleet review by the Japan Self-Defense Forces. They agreed their nations’ combined naval strength provides a bulwark to Chinese territorial ambitions.

Still, Sibal said, China’s concern that the international community wants to stop its expansion is unwarranted.

“The idea is not to contain China — the idea is to actually limit China’s destructive behaviors as much as possible,” he said.

U.S. Navy Rear Adm. James Pitts, commander of Submarine Group 7 headquartered at Yokosuka Naval Base, Japan, said the four countries share vital interests in the region, “which has fast become the epicenter for the global economy.”

About 60 percent of the world’s trade flows through the South China Sea, accounting for “an estimated one-third of global shipping,” he said.

The sea, part of a busy commercial highway between the Indian and western Pacific oceans, is also a crossroads for navies of many countries.

The U.S. 7th Fleet, based at Yokosuka, keeps a high profile in the area. It covers an area from the International Date Line in mid-Pacific to the India-Pakistan border in the Indian Ocean. It’s the largest of the U.S. numbered fleets.

“On any given day within the 7th Fleet area of responsibility, there are between 50 and 70 ships and submarines, 140 aircraft and approximately 20,000 sailors and marines,” Pitts said.

Since 2010, China has claimed and militarized 27 islands and reefs in the South China Sea, according to the Center for Strategic Studies’ Asia Maritime Transparency Initiative.

International law does not recognize China’s sovereignty over the islands, but China maintains that countries should ask for permission before transiting within 12 nautical miles of them.

“We have no illusions about being able to control and safeguard the 100 million square miles that comprise the Indo-Pacific on our own,” Pitts said.

Panel moderator and former Japanese defense minister Satoshi Morimoto said the state of affairs between the U.S. and China in the South China Sea is reminiscent of historic face-offs between established and rising powers dating back to Athens and Sparta.

“These tense relationships have occurred in many times,” Morimoto said through a translator. “The collision between the two is unavoidable.”

David Brewster, a senior research fellow at Australian National University’s National Security College, said the U.S. remains the region’s top power but its dominance over the Indo-Pacific is in “relative decline” as China expands its influence.

To maintain its authority, he suggested the U.S. place more emphasis on security partnerships across the Pacific.

“Many people are talking about Cold War II beginning in the region,” Brewster said. “We need to make new friends, new relationships and new alliances in the coming years.”

To start, he offered that Japan, India, Australia and U.S. — as like-minded, democratic, Pacific nations — should “better coordinate coast guard responsibility” because coast guards have less political implications than warships.

“A quad of coast guards would be a non-controversial way to work together,” Brewster said.

The U.S. Coast Guard has become more involved in the Indo-Pacific, sending two cutters on deployments to the region this year. The U.S. Coast Guard cutter Bertholf in March became the first cutter in U.S. history to sail through the tense Taiwan Strait.

Pitts said the four countries’ “combined sea power continues to be the critical foundation of stability and prosperity throughout the region.”

“Even with the threat of rising and revisionist powers, we will remain focused on preserving the rules-based order while enhancing the stability that binds its existing network of its allies and partners,” he said.

The fleet review is set for Oct. 14, and Japan expects 46 ships and 40 aircraft, including those from China, the U.S., Canada, Singapore, the United Kingdom, India and Australia, according to a Japan Maritime Self-Defense Force press release.