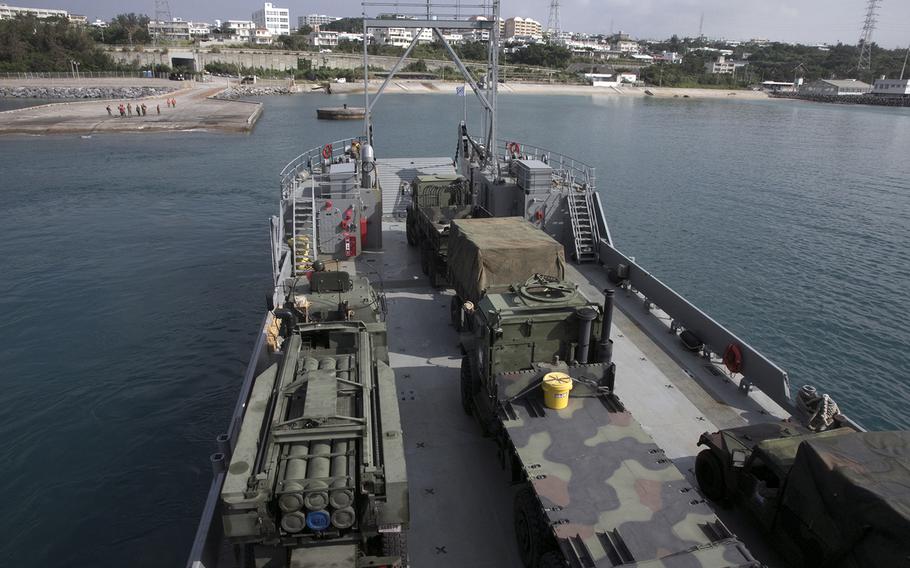 The USAV Harpers Ferry pulls away from Kin, Okinawa, carrying elements of a Marine Corps HIMARS platoon during a joint training exercise on Thursday, Oct. 31, 2019. (Matthew M. Burke/Stars and Stripes)

The USAV Harpers Ferry pulls away from Kin, Okinawa, carrying elements of a Marine Corps HIMARS platoon during a joint training exercise on Thursday, Oct. 31, 2019. (Matthew M. Burke/Stars and Stripes) 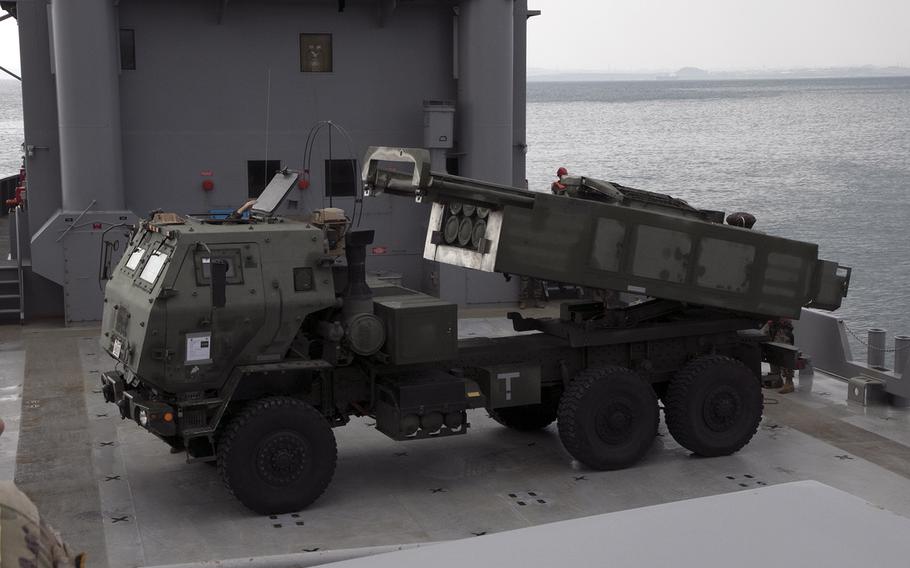 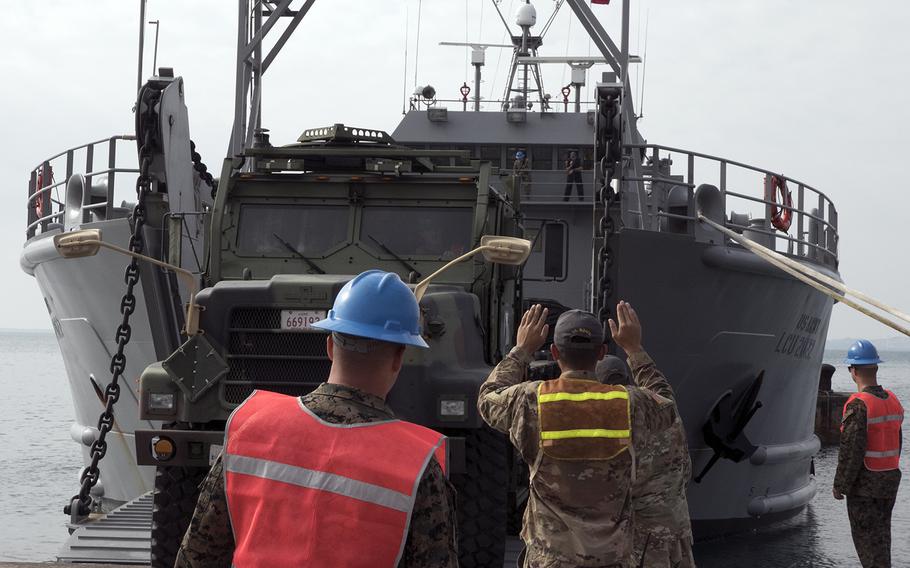 Soldiers with the Army's 10th Support Group back a Marine Corps vehicle onto the USAV Harpers Ferry during a joint training drill at Kin, Okinawa, Thursday, Oct. 31, 2019. (Matthew M. Burke/Stars and Stripes) 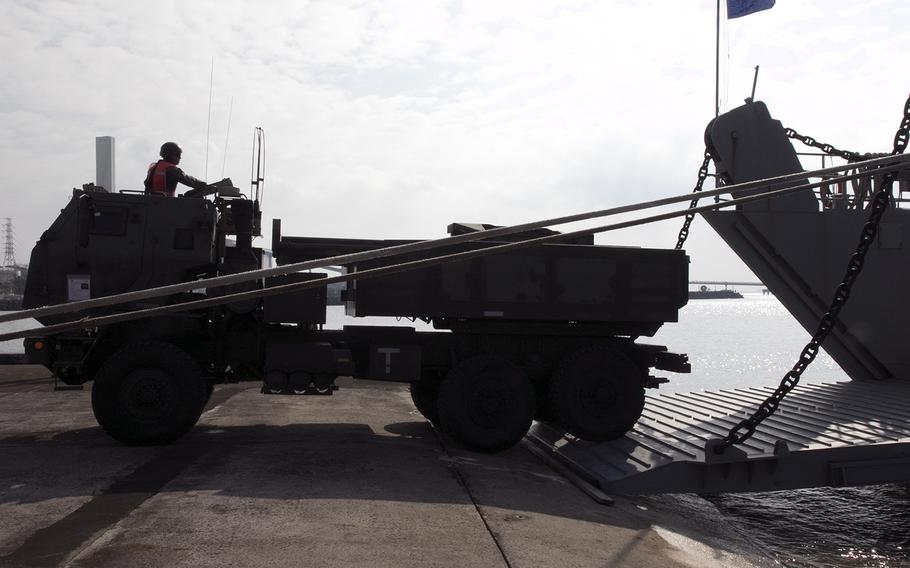 A member of the 12th Marine Regiment HIMARS platoon backs a launcher onto an Army vessel at Kin, Okinawa, Thursday, Oct. 31, 2019. (Matthew M. Burke/Stars and Stripes)

KIN, Okinawa — The Army successfully moved a Marine Corps mobile rocket system on a landing craft at sea for the first time Thursday, a short demonstration of U.S. ability to quickly move the system where it’s needed.

The Marine Corps on Okinawa is working to improve its ability to defend the southernmost islands of Japan that stretch over hundreds of square miles between the East China and Philippine seas. The Marines’ M142 High Mobility Artillery Rocket System, or HIMARS, is a key weapon in its arsenal.

Col. Michael Roach, commander of the 12th Marine Regiment, said mobility is the key to success in the event of a conflict in the Pacific. Cooperating with other services and allies is a big part of that.

“For the large amounts of water in the region, the main way we’re going to move around here is via landing craft,” he said while overseeing Thursday’s exercise. “So this really helps us maintain that lethality but also helps strengthen our interoperability with the Army that we don’t get the opportunity to do as often as we would like.”

Interoperability is a term the military uses often to mean, in this case, the ability of one service branch to use training methods and military equipment of another service. The Marines on Okinawa have twice so far shown they can move their HIMARS — basically a large truck with a complement of either rockets or missiles launched from a platform mounted on its back — with a landing craft. The Marines moved the HIMARS in a similar demonstration with the Navy on Aug. 14. This was a first for the III Marine Expeditionary Force.

Moving the rocket system via small landing craft will enable the Marines to establish advanced bases on Japan’s islands during an attack.

“We understand that we have to be mobile to be successful and provide deterrence in the region, so what this does for us today is strengthen our ability to move quickly and move over a large distance,” Roach said.

The HIMARS can fire several types of rockets and missiles and reach targets beyond 40 miles away, according to the Marines. Originally developed by the Army for use on land, its range exceeds the reach of artillery cannons and its munitions are guided by GPS, according to the U.S. Naval Institute.

The launcher vehicle comes with a three-man crew, a resupply vehicle and two resupply trailers.

The system can be moved on a C-130 transport plane, for example, and while air travel is faster it comes with space and weight restrictions that landing craft just don’t have, Roach said. Landing craft can also get into places that some larger naval vessels can’t.

“We’re able to get more equipment and more Marines into an operating area, with more of their kit, than we normally have,” he said.

Backing up to move forward Thursday’s started with the early morning arrival of a 12th Marines HIMARS platoon in a five-vehicle convoy at an isolated dock called “Kin Red” in the Okinawan town of Kin.

Soon after, Landing Craft Utility 2022, the USAV Harpers Ferry, of the Army 10th Support Group arrived at the dock and lowered the ramp at the front of the boat.

The demonstration was “more of a proof of concept” that HIMARS is compatible with Army watercraft and the Army is capable of rapidly moving the Marines to islands in the Pacific, said Army Sgt. 1st Class Christopher Davis, noncommissioned officer-in-charge of marine operations for 10th Support Group.

“The Army watercraft is only a small portion of what 10th Support Group does out here,” he said. “It’s a critical piece but it’s only like a very small piece of what we actually do.”

The 10th Support Group’s job is to mobilize and move units of the Army and other services throughout the Pacific, Davis said. It has just two boats in the region, but others could be brought from Hawaii if needed.

“We would like to see that [number of boats] grow,” Davis said.

The Marine HIMARS platoon queued its vehicles to prepare to load onto the landing craft. Then, one by one, they approached, turned around and backed painstakingly on board, directed by the ship’s crew.

Backing a Humvee or a large utility truck with a trailer attached up a ramp and onto a tightly spaced boat came with challenges, including the soldiers and Marines speaking their own respective “languages.”

Amphibious soldiers When loading was complete and the HIMARS was successfully tied down, the Army crew cast off the lines and the boat buzzed over frothing swells of tropical blues and greens.

While the ship bounced gingerly in growing swells as it moved farther and farther from Kin Red, Risvanoglu stood over the wheel in the pilot house. He pored over digitized charts, and just as on a Navy ship, crewmembers with binoculars scanned the horizon for boats and other obstacles. They communicated constantly.

Down on deck, Marine Lance Cpl. Tyrone Larson, a Humvee driver from Arizona, sat in the driver’s seat waiting to offload. He said communication was the most challenging aspect of Thursday’s exercise. He said not everyone was always on the same page.

“It was a pretty good experience,” Larson said. “You know, we’ve got to learn from these things. It’s not every day we back up into a ship.”

The landing craft continued out to sea, turned around and returned to Kin Red, the trip lasting about an hour. Eventually, the Army and Marines will train together to take the HIMARS launcher to an island and establish “the launcher, security and logistics to sustain long-range fires,” said 3rd Marine Division spokeswoman 1st Lt. Christina Metzler.

Learning experience Back at Kin Red, the support vehicles were offloaded one by one, all except the HIMARS launcher.

Master Sgt. David Morgan, battery field-artillery chief for Battery Q, 12th Marines, directed the launch team to move the vehicle around the deck and into various positions. The team elevated the launcher and swung it around.

Asked what the team was doing, Morgan shook his head and offered no response.

“The HIMARS has been able to shoot off of ships and stuff like that,” he said. “It’s a capability of us being able to rapidly provide accurate and timely fire throughout the [U.S. Indo-Pacific Command] area of responsibility.”

After the exercise was over, the battery chief debriefed his Marines.

“It’s all about your learning,” Morgan said as they crowded around him in a half-circle.

“It’s not as easy as you hoped it would be to get backed onto a ramp … even though you know what you’re doing, but at the end of the day it’s just learning something new, so always be willing to try.”

However, Morgan said the exercise went well. The two services communicate differently, he said, so training together would only help future operations move more smoothly.