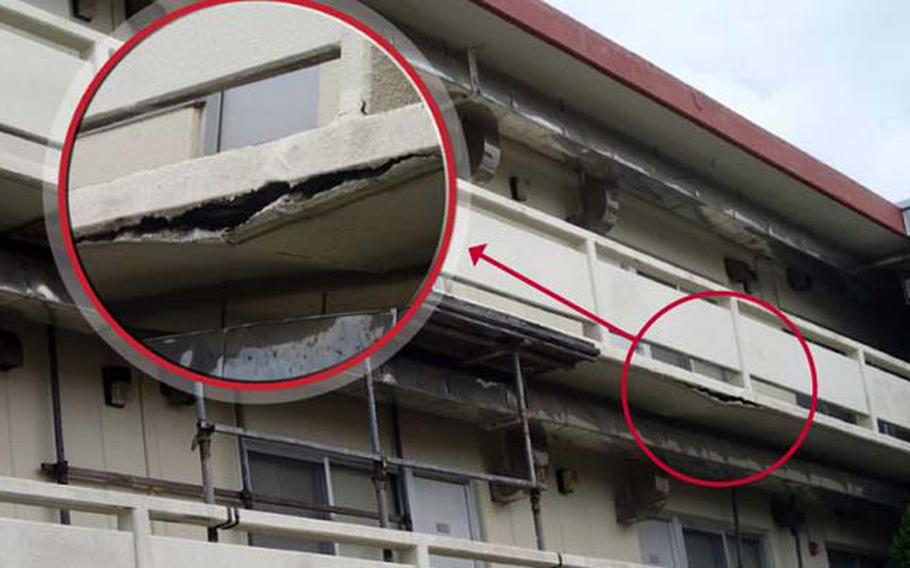 The report found elevated levels of radon — a naturally occurring gas associated with lung cancer — in multiple buildings throughout Japan, including one at Yokosuka Naval Base that registered nearly six times higher than recommended government limits.

The findings in Japan underscored what the IG stated was a problem affecting the military worldwide: The Defense Department has no uniform standards for detecting and fighting two serious health hazards.

“Based on our inspection, the significant presence of mold and DOD’s current ad hoc approach to radon mitigation places unnecessary risk on the warfighter and their dependents,” according to the report, released Wednesday.

The IG called for Pentagon-level instructions to detect and remedy both excessive mold and radon, but was rebuffed by John Conger, acting deputy undersecretary of defense for installations and environment.

Conger stated that the services’ differing standards “reflects the continuing evolution in the knowledge of health risk assessment.”

“Because there is no U.S. federal standard for radon or mold in the U.S., there is no standard that would be applicable to U.S. facilities outside the U.S,” Conger wrote in a July 24 memo.

The IG disagreed, citing several federal laws and standards calling for radon mitigation in federal buildings within U.S. borders. Stating a firm belief that “serious health hazards such as these need to be addressed,” the IG called for further comment from the Pentagon by Oct. 31.

The IG inspected housing and common areas at about 2 percent of all housing on select bases in mainland Japan and Okinawa between September 2013 and March, according to the report.

About half of all violations found were fire safety issues like missing smoke detectors, broken alarms and inadequate suppression systems.

“Installation personnel did not ensure that fire protection systems were properly installed, periodically inspected and maintained,” the report concluded. “As a result, risk of personnel injury or death is not effectively mitigated.”

Electrical deficiencies, including missing surge protection and exposed wiring, made up the next-largest batch of code violations.

Air Force and Marine officials in Okinawa deferred all comment about their bases to U.S. Forces Japan, which said it was pursuing responses to queries.

Okinawa Marine bases were cited for 479 code violations after inspections on 416 units.

At Yokosuka, investigators found two buildings with elevated radon levels, including the one that registered a level nearly six times higher than the Environmental Protection Agency recommended standard for mitigation. A required radon survey was not taken at the Negishi housing area, which is run by Yokosuka, the report added.

One building at Naval Air Facility Atsugi was found to have elevated radon levels at more than four times the EPA standard, but a subsequent test found acceptable readings.

The IG recommended that each building in question be retested.

Several bases haven’t been conducting radon surveys or maintaining databases, according to the report. For example, Atsugi had not performed a comprehensive radon survey for new and renovated housing in the past 23 years.

The EPA estimates about 21,000 lung cancer deaths each year in the U.S. are radon-related. Exposure to radon is the second-leading cause of lung cancer after smoking, according to the EPA.

On Thursday, Commander Navy Region Japan officials acknowledged that radon testing had not been performed for several years at Atsugi.

When the Navy received the IG’s preliminary report last year, workers began retesting the buildings for radon levels and fixing the 134 code violations found at Yokosuka and Atsugi. Of those, 107 have been fixed, Navy spokesman Cmdr. Ron Flanders said.

Another 10 of those violations were found in homes slated for demolition at Atsugi, while the rest have been planned for remediation.

“We are quite confident that our families are in safe and quality housing,” Flanders said. “We have taken a lot of steps and worked hard over the last several months to fix the majority of those things.”

It was unclear Thursday which building tested particularly highly for radon at Yokosuka, whether it was occupied and the status of current testing.

However, officials said they have been installing radon detection devices, including 300 at Atsugi, and working with Army personnel on retesting.

Although radon was cited in the report as particularly serious, it was excessive mold growth that made up the majority of environmental violations.

“When mold issues were identified, rarely was the source of water intrusion addressed,” the report stated. “In addition, there is no DoD wide policy or guideline on mold mitigation and control.”

Mold issues also have been identified in recent years by residents at bases in the United States.

A class-action lawsuit against a private contractor operating base housing in the Norfolk, Va., area is now in its third year of litigation.

The plaintiffs allege that Lincoln Military Housing’s inattention to mold buildup led to allergies, respiratory problems and even brain injuries. The contractor denies the charges.

The IG investigation also tested radiation levels, which measured at expected background levels and posed no demonstrable threat, according to the report.

Radiation became a concern for many in Japan following the March 11, 2011, earthquake and tsunami that led to meltdowns at the Fukushima Dai-ichi nuclear power plant.