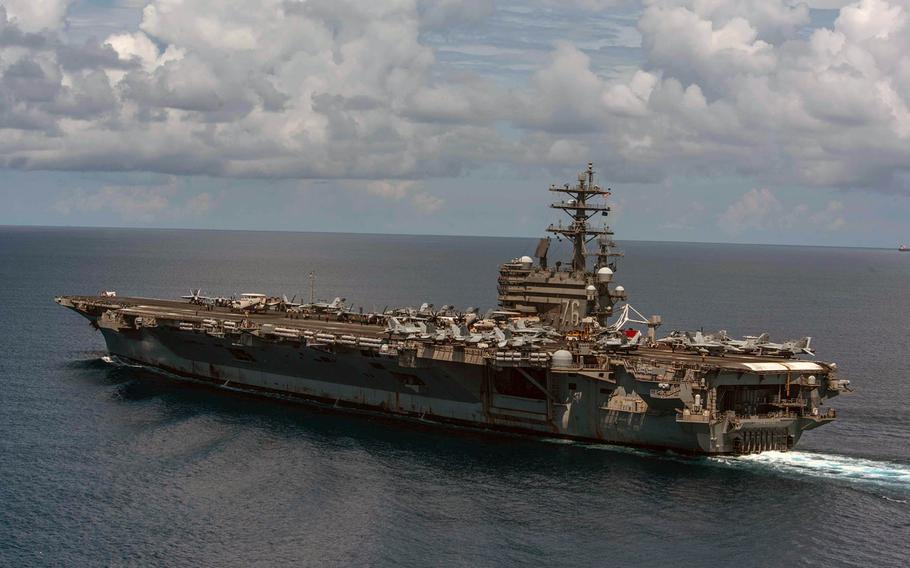 Coronavirus forced some of its crew to quarantine aboard the aircraft carrier USS Ronald Reagan, shown here in July 2019, at its homeport, Yokosuka Naval Base, Japan, for the December 2020 holidays. (Kaila V. Peters/U.S. Navy)

YOKOSUKA NAVAL BASE, Japan — Hundreds of sailors from the aircraft carrier USS Ronald Reagan are quarantined after having close contact with others who tested positive for the coronavirus, according to emails between the ship’s leaders.

About 350 Reagan sailors “are in some form of” quarantine at Yokosuka, the carrier's homeport, according to executive officer Capt. Matthew Ventimiglia, who started an email chain Sunday between the ship’s senior leaders. Some are in isolation because they recently arrived in Japan, according to Ventimiglia’s email.

Some quarantined sailors may be out in time for the holidays. Many “are on track to be released this week” as the ship prepares to conduct a “large test-out of quarantine,” Ventimiglia wrote Sunday.

However, Reagan spokeswoman Lt. Cmdr. Dawn Stankus told Stars and Stripes in an email Tuesday that “there is no ‘push’ to get sailors out of quarantine before the holiday weekend because shipboard leadership continues to take the threat of COVID-19 seriously,” referring to the respiratory disease caused by the coronavirus.

Sailors quarantined over Christmas “will receive care packages, pizza and have an opportunity to participate in a festive door decorating contest,” Stankus said. None will spend the holidays on the ship, but instead will stay in base facilities.

Meanwhile, the base is coping with its largest coronavirus outbreak since the pandemic began, base commander Capt. Rich Jarrett said in a Facebook video Friday.

As of Tuesday, the base reported 68 people with the virus are being monitored by base medical professionals, according to base public affairs. No infected sailors are aboard the Reagan, Stankus said.

The Reagan on Dec. 8 implemented an “essential-personnel only order” on the ship as coronavirus cases increased, Stankus said. That order was eased Friday, but those who had close contact with positive cases were ordered to quarantine “for further observation and testing.”

About 260 quarantined Reagan sailors are assigned to the V-2 division, which maintains and operates the ship’s steam catapults, Goldhammer wrote in the email chain Tuesday. They have been under a shelter-in-place order for more than a week.

Of those, 150 have quarantined at their homes, where conditions are “painful but tolerable,” Goldhammer wrote in the email chain.

The remaining 110 were quarantined on board the ship, Goldhammer said.

For them, being confined aboard the carrier was “excruciating,” Goldhammer wrote. Some were seen huddling in bathrooms, trying to get better wireless internet access, according to his email.

“They were stuck on the ship and not able to go anywhere, even on the ship,” Goldhammer said in the email.

The sailors have since moved off the carrier, Stankus said. There were no sailors quarantined on the ship as of Thursday night.

Stankus said the quarantine has had “no impact to mission and readiness,” but Goldhammer in the email chain said the carrier could miss an opportunity for maintenance and upgrades, called a selected restricted availability, or SRA, if sailors can’t safely return to work.

“We understand the importance of stopping the spread of COVID quickly, so that we can continue essential work to sustain our ability to deploy and answer needs of our nation, allies and partners,” Stankus said in her email to Stars and Stripes.

Ventimiglia urged leaders aboard the Reagan to stem the virus’ spread to accomplish the work and allow the crew some time off.

“I understand the timelines are tight, but we’ve got to make tangible progress this week,” Ventimiglia wrote, “or we’ll quickly find ourselves challenged to keep crew health as required to maximize liberty and SRA on track.”

Ventimiglia instructed officers to consider reducing the number of sailors in berthing at any one time by rearranging sailors’ work schedules, according to his email.

“This is an all-hands battle,” Ventimiglia said in his email. “Make sure your department has taken a critical look at how COVID could impact your team.”

The ship is also taking other precautions in berthing areas. For example, sailors are told to sleep “head to toe” in their racks to avoid breathing in close to others in a parallel bunk, Ventimiglia said in an email in the chain Monday.