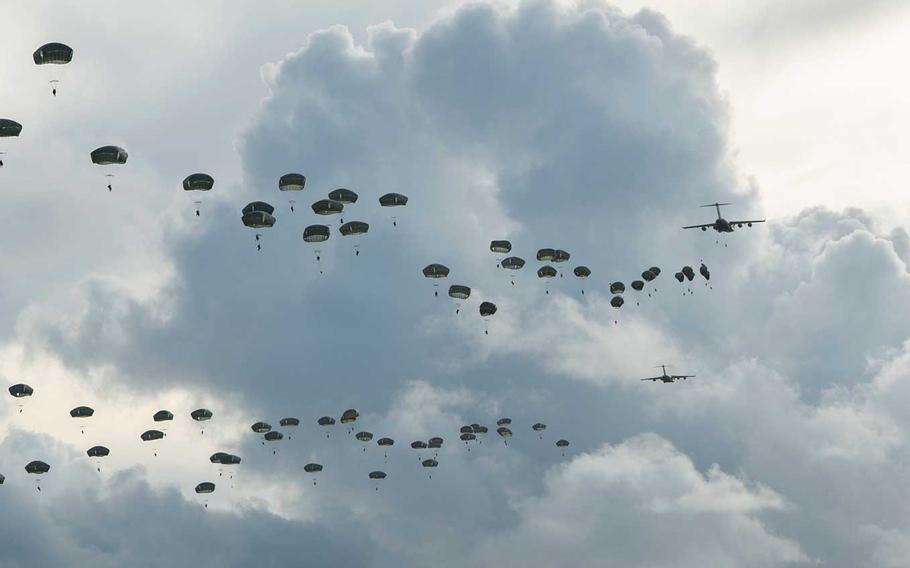 About 350 soldiers parachuted into Andersen Air Force Base on Tuesday to complete a training mission that began with a marathon flight from Alaska.

Five C-17 Globemasters flew the paratroopers from Joint Base Elmendorf-Richardson in Alaska to Guam, where they secured the air base as part of an emergency deployment readiness exercise, the Army said in a statement Tuesday.

The soldiers are with the 25th Infantry Division’s 4th Infantry Brigade Combat Team — the Army’s only Pacific airborne brigade. They learned of the mission only several days before the jump, the Army said.

“This scenario tested our ability to execute real-world missions and demonstrated that we are capable of deploying anywhere in the U.S. Indo-Pacific Command area at a moment’s notice,” Col. Christopher Landers, commander of the 4th Brigade, said in the statement.

The coronavirus pandemic has challenged the military’s ability to train in groups and conduct missions involving travel.

The aircraft carrier USS Theodore Roosevelt was sidelined in Guam for about six weeks this spring to deal with an outbreak that infected more than 1,150 crew members.

More recently, 35 airmen who arrived in Guam on May 25 subsequently tested positive for the virus and were quarantined on the air base.

“We wanted to show that despite [the coronavirus] going on we can still really answer any call that comes our way, that we have the ability to do that — and still be tactically proficient no matter what the situation is,” U.S. Army Alaska spokesman Maj. Charlie Dietz said Tuesday in a phone interview.

Prior to leaving Alaska, all personnel involved in the mission were screened for COVID-19, the disease caused by the coronavirus, he said.

The paratroopers were expected to return to Alaska within a day of landing.

The soldiers were tested for the virus throughout the preparation process and will remain separated from Andersen personnel during their short stay, Dietz added.

“There have been no cases that have come back positive,” he said. “They’re kind of in a bubble, and they’re not interacting with anybody that isn’t part of their group.”