Howard: Goal is 25 percent women in each Navy ship, squadron 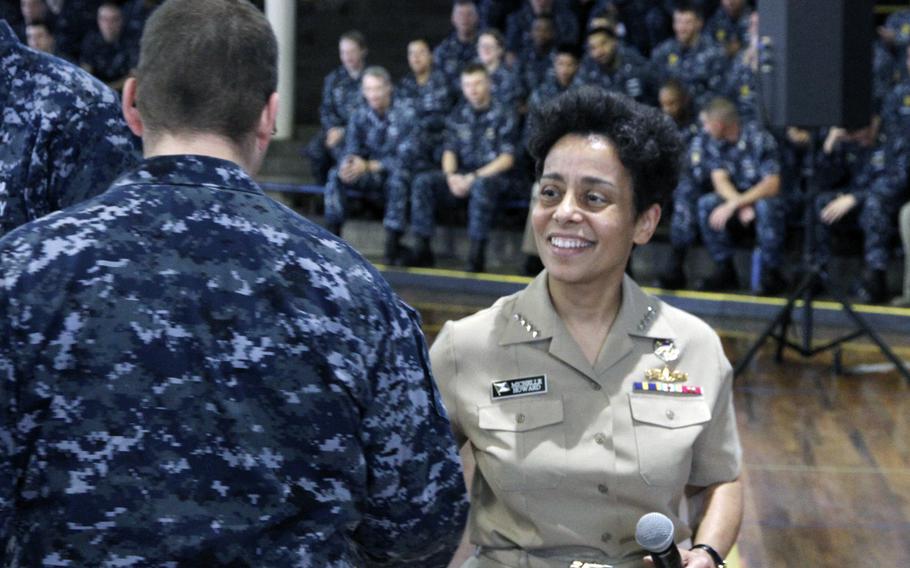 JOINT BASE PEARL HARBOR-HICKAM, Hawaii — The Navy is proceeding with its plan to increase the number of women in the service to 25 percent with a similar goal of attaining that ratio in each ship and squadron, the vice chief of naval operations said Thursday.

Women currently make up about 17 percent of the Navy, said Adm. Michelle Howard, who made a stop in Honolulu on her way to the International Maritime Defense Exhibition in Singapore, where she will meet with her counterparts from other nations in the region.

Howard, who became vice chief last year, told an all-hands call that women made up only 5 percent of the Navy when she joined in 1978.

Air Force Secretary Deborah Lee James said last fall during a stop at Pearl Harbor that the Air Force is made up of about 20 percent women but said she wanted to increase that number, possibly to 30 percent.

Howard said women make up about 46 percent of the civilian workforce, and studies by the Department of Labor have found that an organization achieves optimal performance when its workforce maintains at least 25 percent of whatever the minority sex might be.

Without that, there “are always accusations of tokenism” and “stereotyping,” she said.

For that reason, Howard proposed to the secretary of navy that the service “ought to be shooting for a Navy that’s about 25 percent women,” she said. At that level “workplace relationships get normalized,” she said.

Howard’s plan, however, goes beyond an overall number and seeks to specifically increase the number of women serving on each ship and squadron.

Because the Navy is globally distributed, a higher percentage of women is needed overall if they are to be represented in greater numbers in ships around the world, she said.

“We’re going back and looking at the ships — all of them — and what percentage of women are on the ships. Over time we’ll modernize them to make sure we get to about 25 percent on each ship.”

Alluding to the general problem of sexual assault in the military and Navy ship commanders routinely relieved of duty for inappropriate conduct, Howard said “we have pockets where people are isolated” and “sometimes their behavior isn’t so good.”

Historically, women in the service have filled more positions in particular occupations than others, she said.

“So, for example, if you look at the nurse corps officer community, it’s the men who are a minority in that community,” she said.

“What we want to do is make sure women are aware that there’s more out there than traditional jobs. There’s growth and opportunity across all the communities.

“We need women leadership just as we need male leadership in some of these communities.”

During a question-and-answer session later with reporters, Howard said the Navy is still hashing out the future role for women in one of the service’s most elite communities, Naval Special Warfare. Women are barred from serving in the NSW, which includes the SEALS, but possible integration is under review.

U.S. Special Operations Command has the lead in that review but is not scheduled to provide recommendations until the end of the year, Howard said.

She said her sense was that the command was grappling with what “occupational” physical fitness standards would be used if the NSW is opened to women.

“What I think will happen is that we won’t change those occupational standards,” she said.

Asked about overcoming a belief among some men that women aren’t physically up to the task of filling these elite combat positions, Howard said, “I can’t speak to the male perspective. I’m not a guy.”

After a pause she added: “I’ve served at sea for 30 years. I’ve been in command of a ship, know my community. I’ve been their leader, and my sailors have responded to that. And I believe I and my team have been successful in every mission we’ve been given.”