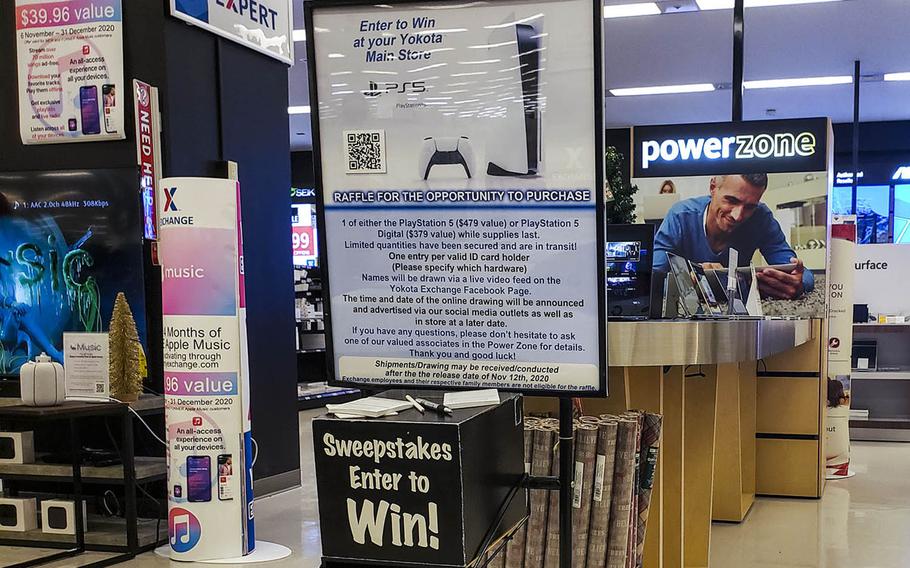 Buy Photo
A sweepstakes box offers the chance to purchase a PlayStation 5 console from the exchange at Yokota Air Base, Japan, Wednesday, Nov. 11, 2020. (Theron Godbold/Stars and Stripes)

Sony’s PlayStation 5 and the Microsoft Xbox series X were released on Thursday and Tuesday, respectively. Supplies are limited and demand is high.

The coronavirus pandemic, which has made gaming products very popular, also complicates their sales. New versions of either system would normally attract a surge of buyers the first day the consoles are available.

“The pandemic has created unprecedented demand in the gaming category. Shoppers are staying home and purchasing more gaming items which has created worldwide supply shortages,” said Col. Scott Maskery, the Army and Air Force Exchange Service’s Pacific Region commander, in an email to Stars and Stripes on Nov. 9. “This, combined with the excitement over the new console launches, will likely make more popular items harder to find through the holidays.”

The exchanges started taking preorders online for both systems in September, spokespeople for both exchange commands said. Those orders will be shipped to the customer or available for in-store pickup.

“The level of interest and business surpassed any of our expectations for either preorder campaign,” Kristine M. Sturkie, a public affairs specialist at the Navy Exchange Service Command, said in an email Tuesday. “All stores have created ‘pickup’ schedules with customers to avoid any larger crowd issues.”

However, individual stores received their own shipment of game consoles. Those were the systems available by lottery. Winners had the opportunity to buy the system of their choice at the store and take it home immediately.

At Yokota, home of U.S. Forces Japan in western Tokyo, the drawing was held at 5 p.m. Friday for the new Xbox X and Xbox S consoles. The PlayStation drawing was scheduled for the following day.

Some AAFES exchanges could expect larger quantities than they anticipated, Maskery said. Manufacturers determine unit allocations to different retailers and purchasing specialists work with vendors to secure more units as they become available, he said in his email.

“These efforts are paying off for authorized shoppers looking to pick up a PS5, Xbox Series X or Xbox Series S as the Exchange secured 50% more units than previous console launches,” Maskery said. “To ensure all authorized shoppers have an equal chance, Pacific Exchanges are conducting lotteries to distribute these limited supply products.”

In Japan, the new generation of PlayStation consoles were available by preorder, but consumers had to make special arrangements to receive them.

“To protect customers, retailers, and staff, we have no plans to do events or sell the PS5 in-store when it goes on sale,” Sony said on the Japanese PlayStation blog on Nov. 5.

Xbox had no such restrictions.

Excitement is also building for the games that will come with the new consoles.

“I am more excited to see the advancement in the games than I am in the systems themselves,” said Jerome Ray, a spouse at Yokota.